The Godfather (1972)
Lump this into the category of films that a surprising amount of people didn’t know was originally a book.  Mario Puzo’s novel of the same name broke records back in its day, but when Francis Ford Coppola expressed interest in turning it into a film, many though he was crazy.  It’s a massive book, with a long and intricate story featuring a rich cast of characters.  Coppola obviously managed to handle it in grand style, giving us a film that managed to pare down the bigger picture into a story centered around a family.  It wasn’t an easy task, but we were left with one of the greatest films ever created, not to mention roles that gave several well-known actors their biggest start.

Jaws (1975)
Jaws holds a very special place in my heart and is one of my favorite films.  Jaws is a big reason why I got into filmmaking in the first place.  It’s filled with action, suspense, and a story that is hard to rival.  Up until Star Wars came along this was the #1 box office of all time record holder, and it rightly deserved its place.  What’s more amazing to me, however, is how closely it follows Peter Benchley’s book.  Peter actually got a hand in writing the screenplay, and while one major side-plot was eliminated (involving a love affair with Chief Brody’s wife) from the film, overall, every other scene can be found in this movie.  It’s about as close to an exact translation as one can get.

The Princess Bride (1987)
This is one of the few movies (like Jaws) that has the privilege of having the book’s author, William Goldman, also be the screenwriter.  It’s a comical and whimsical tale that’s quirky humor is just as funny today as it was when it first released.  Really, it’s hard to think of this movie as being two decades old, but that’s the power of a great story: it’s timeless, and The Princess Bride has aged incredibly well.  The book itself is a masterpiece of storytelling which uses a unique literary device no other author has been able to copy successfully.  With the author on board writing the screenplay, fans of the book were treated to a true adaptation with all of the same wit and magic the story has to offer.  Besides that, the film gave us perhaps one of the most well known, and oft quoted lines in movie history: “Hello, my name is Inigo Montoya.  You killed my father.  Prepare to die.”

Silence of the Lambs (1991)
Even though this came out in the early 90s I still managed to read the book first (I only watched the movie when I was older).  I wasn’t sure what to think when I first popped in the Silence DVD.  Thomas Harris’ book was disturbing and brilliant all at the same time, and carved an intricate tale about finding oneself with the backdrop of a “serial killer on the loose” plot.  The film had a lot to live up to, but holy crap that’s exactly what it did!  The movie on it’s own is a mastery of filmmaking.  The shots are timed perfectly to convey every emotion possible without anyone on screen having to say a damn thing.  The performances were great and never once felt out of character from what the book established.  It’s as if the book was written with Hopkins and Foster in mind for those roles.

Jurassic Park (1993)
Based off of Michael Crichton’s book of the same name, this movie took all of the best qualities of the novel (action, suspense, hungry dinosaurs) and did a masterful job of putting those words into images on the big screen.  It’s hard to deny the impact this film had.  It’s a Steven Spielberg movie for Pete’s sake.  Secondly, it helped usher in the new era of CGI visual effects technology that is now so commonplace in the movie industry today.  Back when this was first made, Spielberg was actually considered a risk-taker for relying so heavily on an unproven technology and there were many who thought he might actually fail because of it.  Now, the tech is such a staple of the film world that it’s hard to imagine a new movie without it.  Besides, it’s Michael Crichton; nearly everything he’s written has been turned into a movie, and it’s hard to mess up his phenomenal stories. 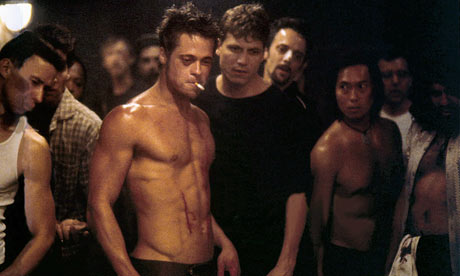 Fight Club (1999)
I am so surprised by the sheer number of people who tell me they never knew this was a book first.  Not only that, but Chuck Palahniuk’s break out book was incredibly awesome on a level you can’t imagine unless you’ve read it.  That being said, I’m amazed that anyone was able to transfer the zany duality of the story into film form, let alone doing it so well.  The movie follows the book’s structure perfectly and is truly an amazing accomplishment for adaptations.  All of this man’s books are great, but they aren’t exactly easy to transfer over.  Just look at Choke…oh wait, that’s right.  No one saw it. Lord of the Rings (2001-2003)
I’m kind of cheating on this one and counting all three films as one entry.  Penned by J.R.R. Tolkien back in the 1940s but published in the 1950s, it’s been a captivating tale to fans for several years and when the movies were finally released, everyone was amazed.  This trilogy did fine justice to Tolkien’s work and treated the source material with a sort of reverence.  It was an impressive and massive undertaking, but one unlike any the film world has seen before.  Winning a ridiculous amount of Academy Awards, this trilogy escalated Peter Jackson into the upper echelon’s of Directing, going from relatively unknown to Spielberg status in just a few years.  Honestly, I don’t think I should even have to mention this one.  It should just be a given. The Notebook (2004)
Say what you will, but I liked The Notebook.  I thought it was an incredibly well-told love story that didn’t adhere to classic cliche’s but managed to stand alone.  Truly, for the most part when you’re watching you forget that you’re watching a love story, or chick-flick, and merely enjoy the storytelling experience.  The book was written by Nicholas Sparks (another author who has many works turned into films) about eight years before the movie, and was actually the his first published work.  Redefining the love story and becoming the next film every single guy in the world was forced to watch by their girlfriends, Notebook is a movie that you can’t help but like.

Angels & Demons (2009)
I may be hunted down for saying this, but I absolutely hated The Da Vinci Code movie.  I loved the book, thought it was a very engaging story, but the movie adaptation was so terrible and boring.  So when I went in to see Angels & Demons my hopes weren’t exactly high, but lo and behold this movie rocked.  While it took a few more liberties from the book than the predecessor did, it was an action-packed journey that fixed all of the problems the first film had.  The characters were believable, fun to watch and altogether fit perfectly.  Hanks and McGregor play well off of each other, and the story will keep you hooked all the way until the credits begin to roll.

Harry Potter (2001-2011)
Again, I’m kind of cheating here, but did you really expect for this to not show up on this list?  By far, you could say this is the biggest book-to-movie adaptation as all of the films combined have made more money than just about any other adaptation.  I mean, it’s not exactly fair because it’s got 6 movies out with 2 more on the way shortly, but it’s success is still hard to deny.  The best thing about this series, though, is how well it’s stuck to the concept and themes of J.K. Rowling’s books (if not strictly adhering to them).  The idea is simple and the story evolves and matures with the characters.  What starts off as whimsical and ‘kiddie’ turns serious and dark as the characters grow older and more aware of their surroundings.  It was an impressive feat to pull off in a book series, but more impressive that the movies were able to do the same thing.

That wraps up part 1 of this adventure and already we’ve talked about some of the biggest films in Hollywood.  It’s no coincidence that all of these films were considered blockbusters, and in large part it’s due to the powerful stories behind them, stories that came from novels.  Be sure to come back next week when I break down the last 10 remaining on my list to see if your favorite adaptation will make the cut.

2020 Oscars Predictions: Who Will Win vs. Who We Want to Win

10 Best Movie Vampires of All Time

What to do with DC