THE DELIVERY
Half screwball comedy and half heist picture, Great Scout tries to be The Sting in a western setting, just don’t expect “Best Picture” material here. At best, it’s an uneven comedy bolstered by the performances of Lee Marvin and especially Oliver Reed, who steals the show as a half-breed Indian intent on spreading a sexual disease among white people. While it has its moments, but it doesn’t always work as a whole.

Reed and Marvin are funny, but the film isn’t always as clever as it hopes to be. There is plenty of physical comedy, shouting, and even awkward profanity. There’s even some brief nudity in the whorehouse that seems really out of place. Instead of getting on with the plot, the movie gets sidetracked easily and your interest may wane. At times, it can be predictable, but when it goes astray, Lee Marvin and Oliver Reed manage to put the movie back on track.

VIDEO AND AUDIO
There is a lot of grain visible in the print used for the video transfer. Even so, the image is quite clear and colors are bright. Motion is handled pretty well, without much artifacting. Sound is Dolby Digital 2.0 from the original mono mix, and it is solid while balancing music and dialogue. 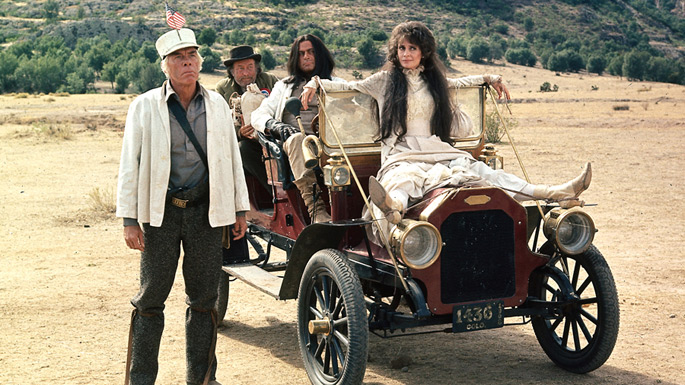 BUY IT OR NETFLIX IT?
RATINGS
MOVIE: B-
VIDEO: B
AUDIO: B
EXTRAS: D
OVERALL GRADE: B-

The Great Scout and Cathouse Thursday isn’t a particularly great film, and it can be silly and distracted at times. However, it is funny enough to watch at least once. The film has quite a following with many, and before the DVD release, VHS copies were in high demand. The movie is funny enough to enjoy Marvin and Reed’s performances, so unless you’ve been waiting for this DVD release, at least rent it or Netflix it. You’ll probably be pleasantly surprised. Parents should beware: despite the PG rating, there is female nudity and PG-13 profanity throughout the film.

The Great Scout and Cathouse Thursday is now available on DVD MOD (Manufacture On Demand) from online retailers through Fox Home Video.