Call of Duty is back at it with Modern Warfare and we take a look back at how it compares to Black Ops 4.

Before we dive into this, we have to separate the two groups of Black Ops 4. On one hand you have people who actually really enjoyed the game. On the other, are people who literally despise it. It’s a little hard to differentiate the two because many the side of “hating” the game are also the people that bash Call of Duty every year, no matter how good it is, just because it’s Call of Duty.

Personally speaking, I know of more people who enjoyed Black Ops 4 more than the last few titles, if only because a majority of my friends list stuck around playing Blackout or Multiplayer right up until MW released. Black Ops 4 also had really good sales numbers compared to the last several entries in the series. As for me? Well you can read my review and see where I stand as I stated it is probably the best Call of Duty to date.

Black Ops 4 worked for the simple fact it took key mechanics from the franchise and polished everything. The speed was balanced, you were no longer super sliding and jumping all over the place, and were instead mostly boots on the ground with some nifty perks added in. The arcade nature was clearly there, but the game wasn’t obnoxiously easy to play; there was skill required. Throughout the year the game received many updates to really balance out respawns and map tweaks, and everything was just…good.

Modern Warfare honestly feels more authentic than games in the past with sound and mechanics. There are good ways to get headshots, strategic spots in maps, and every gun shoots different than the one next to it on the list. BO4 was rather fast paced, and Modern Warfare tones a lot of this down, but let’s dive into that. What makes Modern Warfare so different from previous CODs?

The biggest difference for Modern Warfare that will take you the longest to adjust to is the pacing. Modern Warfare still has the style you expect from Call of Duty with swift clean gameplay, but it’s much slower compared to the previous titles. Even WWII is a bit faster paced than MW is, but going from BO4 to MW is a substantial step. In BO4 it’s really easy to slide around corners, jump over barriers, and swiftly take out a room with ease. In MW you need to be a little bit more strategic, because your character isn’t going to leap into action, then leap out.

Sliding, for example, is normally only utilized to get behind cover that’s close to you. Using it to slide into enemies will often just lead to them getting a head shot. Everything about MW is slower including climbing over objects, or simply moving around. The more you load up your gun and accessories, the slower your character becomes too.

This is a plus for players that didn’t like how fast COD was becoming leading up to BO4. BO4 already toned things down a little bit, but was overall still a rather fast shooter that really gave COD the name of being a “twitch shooter.” MW on the other hand offers a bit more strategy when playing, and overall feels a bit more grounded. Depending on your play style this is either a win, or the biggest drawback.

One of my favorite changes to MW is the perk system. In previous titles you had massive killstreaks and perks that got obnoxious the further the franchise went on. I remember playing Advanced Warfare with some friends and during several matches there were constant killstreaks and perks happening, with very little actual gunplay.

BO4 kind of toned things down, but instead decided to give us character based perks that were constantly all over the map. It adds some fun to the arcade shooter aspect, but MW feels a bit more authentic with it. Instead of constantly calling in bombs, getting easy kills with dogs, or other random things, MW actually requires some precision with most of the killstreaks.

For example, the Cluster Bomb actually requires you to get a laser pointed at the target, instead of just clicking a random spot on the map. You also need more team oriented streaks that will benefit you in zones, instead of clearing out the enemy team. There’s also team based perks like sharing ammo, or radar perks that gives you a slight boost too. 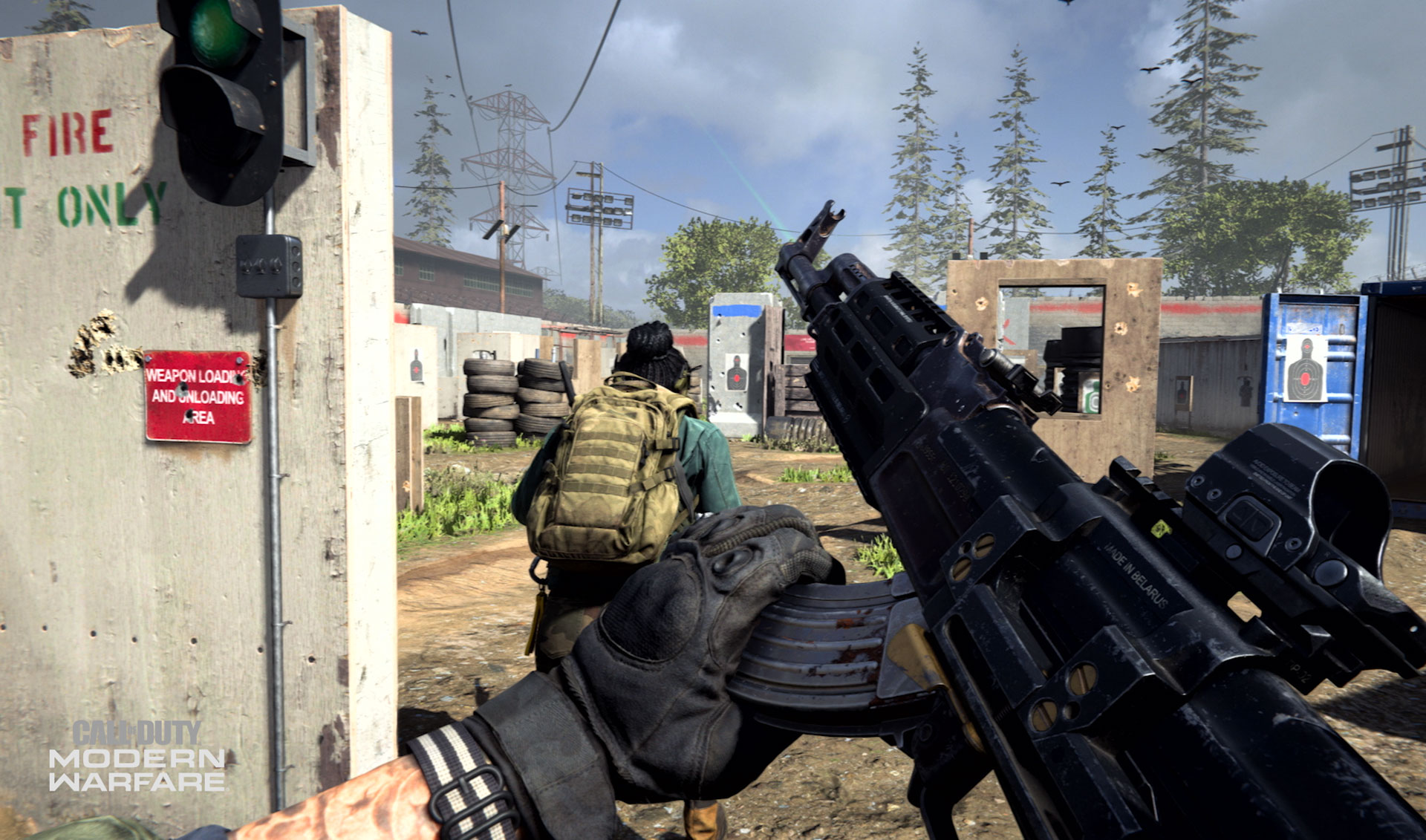 My absolute favorite change in MW, however, are the mechanics themselves. Yes it’s a bit slower paced, but there are so many smaller changes you grow to love the more you play it. I love how maps are set up, and how you can actually squeeze bullets through tiny spaces. At one point I was sitting behind a vehicle and shooting through the driver side window to knock people off a bridge. That aspect of basically being able to hide behind a car and pull those shots off without someone randomly sliding and leaping into the air above me, is thrilling.

The maps are all designed for this. You could be literally hiding anywhere on the map and people actually have to look for your character hidden in trees, behind vehicles, or simply laying perfectly in the dirt. The effect is immediately apparent and gives the smaller, close-quarters maps a frightening feel to them. Anyone could be peeking around a corner, or be sitting in a door.

Call of Duty has always taken pride in loadouts, and this one takes things a bit further than normal. Typically you have your gun, some barrels and stock attachments, then a bunch of perks. This often means a long barrel and extended mag for most people, and it’s overall not really that in-depth beyond fine tuning your actual play style. In MW, however, things are taken to the extreme where every little thing is customizable with a gun.

The barrels have different options, the stocks all do different things, and some attachments can be removed. I mentioned earlier you’ll probably find yourself more interested in customizing your gun more than the perks. Beyond their ability to change things up in significant ways, the other reason you’ll love the customization is how the maps are designed.

Your gun can easily go from a close range beast to a long range wolf with several attachments, which means one loadout probably isn’t going to transfer well across all maps. MW is strategic right from this menu, which normally isn’t the case for COD titles. Yes, you can still have a play style and modify your loadout to that style, but you’ll also get frustrated when that loadout isn’t working well on different maps. Toning Down The Arcade

Modern Warfare is probably the most authentic Call of Duty to date with absolutely insane sound design, breathtaking in-game moments, and overall strategic gameplay. However, this brings about the removal of pretty much everything BO4 added to the franchise. No emotes, no extreme sliding, no obnoxious character based perks, and a more grounded feel to everything.

One interesting aspect to me was how you notice guns shoot. In BO4 it was rather easily to burst shoot multiple enemies at once, but in MW if you don’t have certain attachments on you will see a very big difference. This isn’t just recoil either, you will see muzzle flashes that somewhat blind you when firing, or a tense twitch from your character when you get shot at. For someone who’s been so used to BO4 and simply aiming in a straight line and making shots, this takes some getting used to.

There are other obvious differences in the game too. For example there is an absolutely amazing campaign to play, BO4 of course had nothing in that regard beyond a few character intros. One thing missing in MW is Blackout, however, which means no Battle Royale mode…. Which oddly I think would work really well with these new mechanics. Modern Warfare does also have a co-op mode, similar to zombies, but it’s a broken mess right now and I haven’t spent much time in it to compare to previous co op adventures.

If your biggest complaint for BO4 or previous COD’s was the pacing, then Modern Warfare is going to be an absolutely amazing game for you. Anyone that simply enjoys Call of Duty and has been a fan for many years, like myself, will see just how amazing and different Modern Warfare truly is. There is very little to complain about here at all, but MW feels like a totally different game in almost every regard. The authenticity of the sound, the mechanics of gameplay, everything is simply different. That’s not to say it’s better or worse than previous titles, but it’s refreshing for long time fans. If you can get used to the pacing then MW makes it hard to return to any other titles in the series.

2nd Opinion Pro is Back, New Content Coming Every Week!

AGDQ 2020 Roundup: More than $3 Million Raised for Charity through Speedrunning