Directed By
Written By
Actors
Official Synopsis
Captain Marvel is an extraterrestrial Kree warrior who finds herself caught in the middle of an intergalactic battle between her people and the Skrulls. Living on Earth in 1995, she keeps having recurring memories of another life as U.S. Air Force pilot Carol Danvers. With help from Nick Fury, Captain Marvel tries to uncover the secrets of her past while harnessing her special superpowers to end the war with the evil Skrulls.
Genre
Release Date
03/08/2019
MPAA Rating
PG-13

Captain marvel is the final piece added to the Avengers squad - the person who is supposed to tip the tide against the mighty Thanos and secure a victory for the good guys. But was her story worth telling at the final hour of the Marvel Cinematic Universe?

The answer to that question unfortunately doesn't come easy. For one, the MCU desperately needed another leading lady, and it especially needed to give a female character her own film. This is one regard where the competitor DC had beaten the MCU to the punch. The MCU films have gotten better as of late increasing the diversity of their films, as well as giving more meaningful roles to female characters, and so in that regard, Captain Marvel is a win. However, as an origin story it is forced to travel back in time because the MCU waited until the last minute to tell this tale. And so while the plot does provide the backstory of another powerful superhero, it is doing double duty of filling in some of the missing information before Avengers: Endgame. In this role, the film is a bit heavy handed and deliberate in its franchise-building purposes, something the later Marvel films have been able to do without it being so obvious. What this makes Captain Marvel is just another piece in a larger puzzle, more so than a film which will stand on its own when we look back on the accomplishments of the MCU.

The film starts off on the planet Hala, where an advanced alien race known as the Kree, ruled by a powerful superintelligence, wage a war on another alien race, the shapeshifting Skrulls. Vres is a warrior who was rescued by the Kree six years ago, but she doesn't remember anything before that moment. On a mission to recover a compromised spy, Vres’ special operation team is sabotaged, and Vres is captured. The Skrulls extract her memories and find details of her past life as a fighter pilot named Carol Danvers on Earth. Vres’/Danver’s past and the goal of the Skrull search seem to be related. Danver escapes from the Skrulls, crash-landing on Earth where she meets Nick Fury, agent of S.H.I.E.L.D. Danvers must work with Fury to recover her memory and find the reason for the Skrulls' actions before they can find it first.

The scenes on earth take place in the 1990’s, and so the entire film is essentially a flashback in the greater scheme of the MCU. The plot has more to do with Captain America: The First Avenger and the first Avenger’s film than it does with Infinity War. Visiting the 90’s is a fun nostalgia trip (and really the film doesn’t miss an opportunity to immerse us in 90’s pop culture references), but the side effect is the fact that the film becomes somewhat of a step back in terms of the story progression of one of the most successful film franchises of all time. While the other films had been steadily building up to the final confrontation with Thanos, this film feels like a side journey.

Granted, Captain Marvel is provided a more freewheeling and adventurous tone because it doesn’t have as much of the dramatic weight as some of the most recent Marvel films - the stakes are simply not as high. Like last year’s Ant Man and the Wasp, Captain Marvel is a refreshing change of pace. Teaming Carol Danvers up with Nick Fury makes Captain Marvel an enjoyable buddy cop movie, blended with some of the fish-out-of-water antics of Men In Black. While that combination of influences is fun to watch, it leads me to another minor complaint. The more recent Marvel movies have all found creative ways to push beyond the stereotypes of films we’ve seen before. Captain Marvel doesn’t do this nearly as well, and so in another way it feels like a bit of a let down compared to the creative momentum the series has been building as of late.

What hurts Captain Marvel the most is its predictability. Where the last few Marvel films have found ways to change up the super hero formula to great success, this one seems more by-the-numbers. Main character obtains super powers through freak accident? Check. Main character can’t fully utilize those powers until she really needs them? Check. More than just in plot, the film also struggles to make its hero stand out from the sea of big screen heroes we’ve already encountered, both in and out of the MCU. For one, her powers are ill-defined both in terms of narrative and special effects. She comes into her own so quickly the audience isn’t given the opportunity to explore her capabilities along with her. The action sequences are equally run-of-the-mill, and go so far as to borrow ideas from films that we’ve seen before. The generic action makes it difficult to fully comprehend Captain Marvel as a superhero (including the odd realization that the film never references her character by the title of the film).

The film is directed by Anna Boden and Ryan Fleck. Looking at their background as filmmakers  may explain the uninspired feeling we get from Captain Marvel and her supernatural abilities - namely the fact that these filmmakers have only made indie dramas until now. Marvel deserves some kudos for bringing in different types of filmmakers to create more creative and diverse films. In the past this has worked out mostly well (we’ll forget about that Edgar Wright Ant Man fiasco), but Boden and Fleck still seem like a difficult match for the material compared to Ryan Coogler or Taika Waikiki. Perhaps they did not want their film to be defined by the spectacle, and so those moments are purposefully shot with a perspective honed in on our hero rather than the destruction she is laying in her wake. Really, they do a good job at focusing on Danvers and the message of the film is empowering, especially in the way they show her inner strength as she combats both impossible odds and the stigmas associated with her gender. 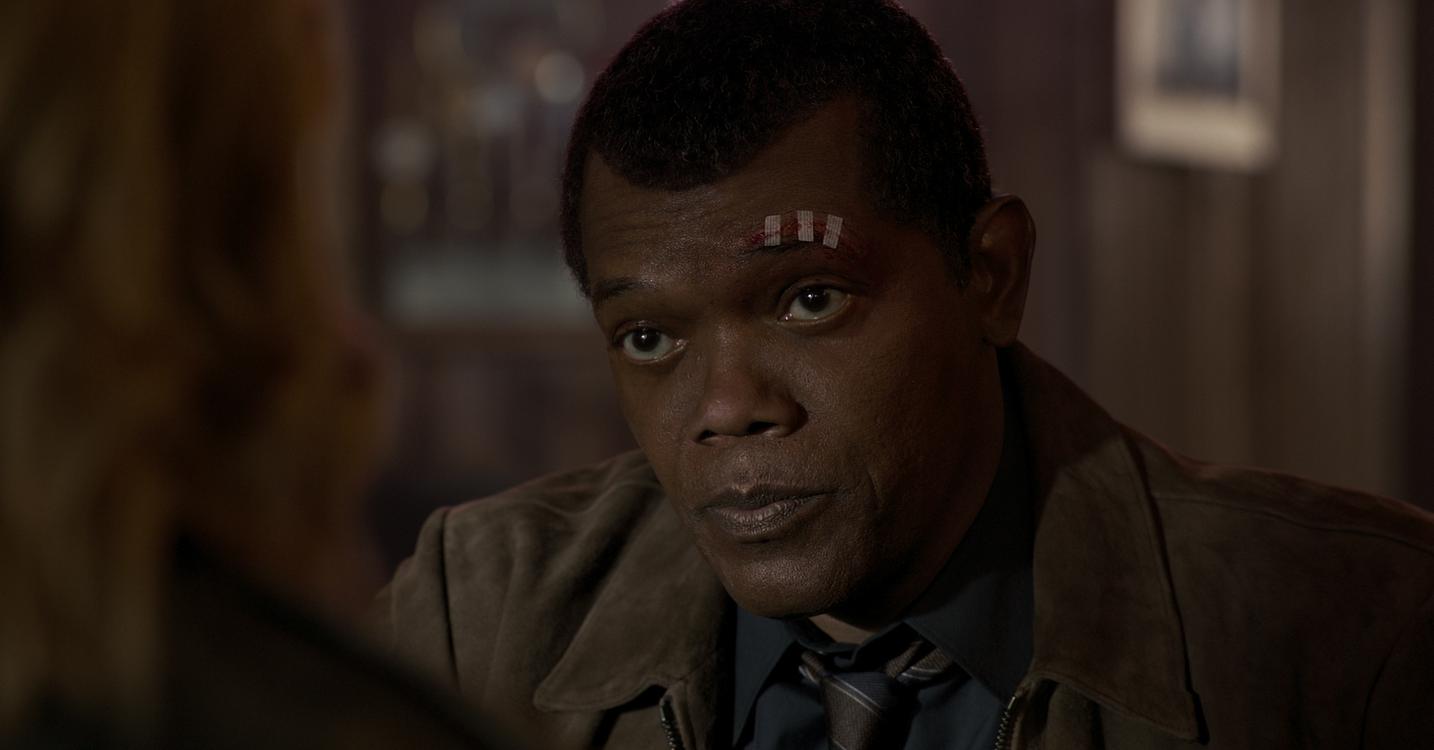 Brie Larson is up to the task of bringing Danvers to the big screen. As I mentioned, the directors do a good job of giving her the spotlight, and Larson does not waste the opportunity. Her character is tough because she is driven to be the best that she can be. Samuel L. Jackson brings classic Jackson charisma and boisterousness to his role, and is digitally de-aged to bring us a classic Jackson look. The special effects used to make Jackson look like his 90’s self are superb, but the production must have used most of their budget to pull this off because this film features some of the worst special effects in all of the MCU films to date. I mean, they brought an an anthropomorphic racoon to life in GoTG, but couldn’t achieve the same result with a common house cat? Jackson does have good chemistry with Larson, which is good because this is the heart of the film, and he works as the audience’s lense into viewing the film’s odder moments. Jude Law and Annette Benning have important supporting roles, but the standout is actually Ben Mendelsohn who brings an atypical wit and softness to the types of roles we’ve been seeing from him lately.

The film’s purpose is to introduce us to a new major character and also add more diversity to the series’ lineup. In these regards, Captain Marvel is a success, but not overly so. The film’s story is essentially told from two ends - connecting the dots between the MCU we’ve seen so far and what happened in Avengers: Endgame - rather than being developed linearly. Filling in the (admittedly small) blanks of the MCU can be fun for avid fans, but it comes at the cost of further exploring a character who has a lot of potential. Indeed, the film does leave the possibility of a sequel open (before Endgame), but I can’t help but ask what is the point if the end result is already known. Captain Marvel definitely looks to be an important part of the MCU, and the film really does a great job of creating an empowered female hero we’ll love to cheer on moving forward. But maybe she deserved a bit better?

What's Bad: Not as creative, interesting, exciting, funny, or important as other recent MCU films it will be judged against, filmmaker's lack of experience in creating big-budget films results in more than a few borrowed ideas, mixed bag special effects.
GP
G.S. Perno Top 10 Reviewer 151 reviews
Report this review Comments (0) | Was this review helpful to you? 0 2