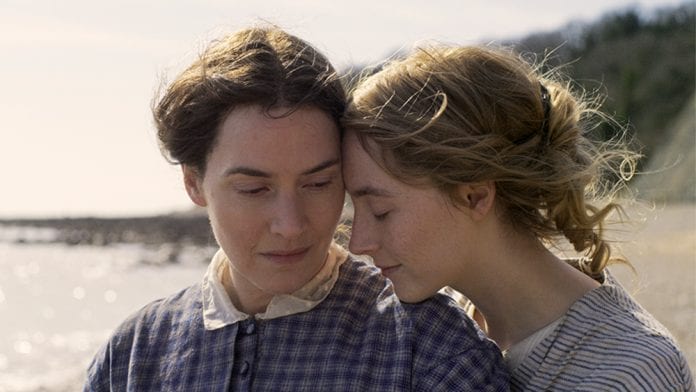 While Kate Winslet can never be faulted for her performances – rather, she often takes on diverse and challenging roles and brings great depth to her characters – Ammonite does neither Winslet nor co-star Saoirse Ronan any favors as far as memorable films are concerned.

Set in the 1840s, Ammonite is inspired by the life of acclaimed self-taught British palaeontologist Mary Anning. The film takes place sometime after Mary’s most famed discoveries and introduces us to the gritty, remote Southern English coastline of Lyme Regis where Mary lives with her ailing mother. These days, Mary spends her time hunting for fossils along the coastline to sell to tourists, though financially Mary and her mother struggle to survive. When Roderick Murchison, a rich tourist with an interest in Mary’s work, arrives in Lyme, Murchison entrusts Mary with the care of his wife, Charlotte, who suffers from melancholia after the loss of their child. A romantic relationship develops between Mary and Charlotte, leaving both women forever changed.

There are some beautiful moments in Ammonite, and more particularly, some beautiful shots. Two scenes stood out to me: one where Mary is wandering through a museum before glancing back toward the direction she came; her head and shoulders perfectly framed by the portrait on the wall behind her. This is arguably a reflection of her own work so fittingly on display, though her gaze glancing backward suggests that she might have missed something (a deeper, more personal fulfillment, perhaps). Another is, again, in the museum, where we see Mary standing face-to-face with Charlotte; a fossil (one of Mary’s discoveries) exhibited and displayed between the two women. This scene gave me Romeo-and-Juliet fish tank vibes, drawing on the same star-crossed lovers theme. One difference here being that the scene between Mary and Charlotte occurs towards the end of the film (after much has happened in their relationship), whereas the scene between Romeo and Juliet occurs at the start of the film (where the world is full of possibilities).

The juxtaposition between Mary’s life and Charlotte’s life was well and thoughtfully communicated, and not only in the aforementioned museum scene. While most of the film, set in Lyme, is dialogue-light, grainy and raw; Charlotte’s London life amongst expensive clothes and possessions carries with it discussion, polish and edifice – a man’s world, where Charlotte and Mary’s deeper knowledge of one another is drowned out by talk, finery and expectations.

Despite these highlights, Ammonite was too slow for my tastes as director Francis Lee delivers a painstaking amount of detail in setting the scene for Mary’s life. The story is carried by sights, sounds and setting which inevitably effects the mood, tone and pace of the film. While this type of arthouse approach is nice for a change and appears to be many folks’ cup of tea (apparently 93% of Google users like this movie), for me, in this film, it tended to drag. The little dialogue suggests that Winslet’s and Ronan’s performances endeavored to explore how raw emotion might transcend words. However, this approach falls flat because there was no emotional chemistry between Mary and Charlotte with which to replace the dialogue. Furthermore, how Mary comes to care for Charlotte does not feel particularly organic. Why, at the outset, would tourist Murchison think a famous palaeontologist would be a good caregiver for his ill wife? The sexual encounters may add heat and intrigue, but I was not convinced that any connection beyond these frolics was forged between Mary and Charlotte. Perhaps the lover’s plight came too late (again, slow) for me to feel invested in their love and tribulations.

Ultimately, a slow pace and lack of emotional chemistry diminished the film’s potential, despite an interesting story. For these reasons, the film is also forgettable – Winslet and Ronan will likely be celebrated for many of their other films before this one. Though, if you are a lover of arthouse and setting-focused films that take their time, you might see and draw much more from Francis Lee’s Ammonite.