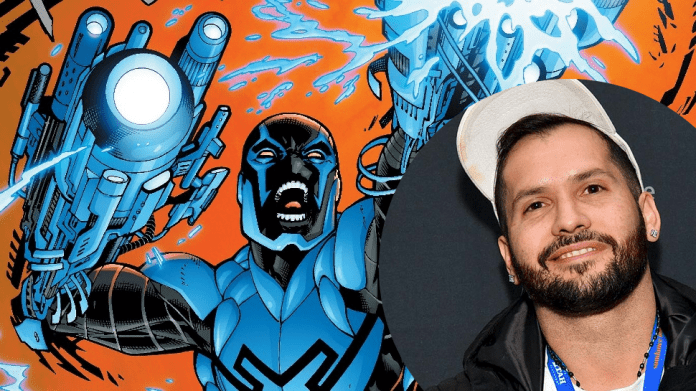 Much like did with Wonder Woman, Warner Bros. and DC are set to make cinematic history once again. This time, with the upcoming Blue Beetle film, DC’s first Latino superhero film. They made the first step today by hiring the director who will bring the comic to life on the big screen.

In a report by TheWrap, WB and DC have hired Angel Manuel Soto (Charm City Kings) to direct the feature. The screenplay that Soto will be working with is from Mexican-born writer Gareth Dunnet-Alcocer (Scarface remake) and (Miss Bala).

“It is an honor to direct Blue Beetle, the first Latino superhero film for DC,” said Soto in a statement to TheWrap. “I want to sincerely thank everyone at Warner Bros. and DC for trusting me to bring Jaime Reyes to life. I can’t wait to make history together.”

Blue Beetle has an extremely long history in comics. It was initially created in 1939 by Charles Wojtkowski and has since been the alter ego of 3 different heroes. As Soto alluded to, this Blue Beetle movie will focus solely on the 3rd hero to wield the scarab’s power, Jaime Reyes.

Jaime Reyes discovered the Blue Beetle scarab on the way home from school with two of his best friends Paco and Brenda, half-buried in a disused lot. Reyes took the scarab home, curious as to what it might be. That night, the scarab came alive, and grafted itself to the base of Jaime’s spine, and provided him with a suit of extraterrestrial armor which can be modified to enhance his speed and strength, as well as to create weapons, wings and shields.

The Blue Beetle film is eyeing a Fall production date. So look for casting news on Jaime Reyes/Blue Beetle in the coming months. No official release date has been announced.