The cult classic in the making, Attack the Block, will be making its way to Blu-Ray and DVD this October!  What a way to celebrate Halloween, huh?  On the disk will be five featurettes, titled “Behind the Block,” “Creature Feature,” “Meet the Gang,” “Unfilmed Action,” and “That’s a Rap.” Also included will be three commentary tracks: one with director Joe Cornish, lead actor John Boyega, and co-stars Alex Esmail, Franz Drameh, Simon Howard, and Leeon Jonesz;  the other will feature Cornish with stars Jodie Whittaker, Luke Treadaway, and Nick Frost; and the final one will just feature Cornish and producer Edgar Wright.

Now, a little word of advice.  First, I must preface it by saying I hardly ever approve of blind buys.  In my opinion, a film should only be purchased if you enjoyed watching it the first time and want to see it multiple times after.  I mean, what’s the point of buying a film that you’re going to see once and just put away for years?  For the price you paid to purchase it, you could have rented 20 or more movies at Redbox that you plan on only seeing once.  Why not spread a little of that film love equally? 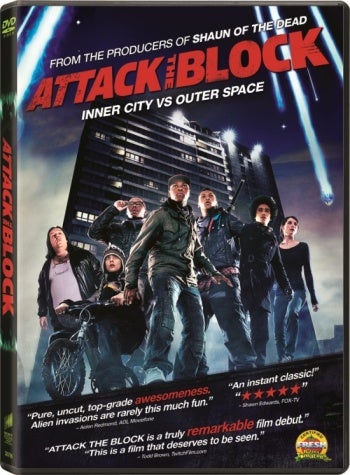 Now judging on the above sentiment, you probably think I’m going to tell you to blind buy Attack the Block.  But you know what?  I don’t think I will.  Because I’ve seen a very strange think happen with Attack the Block.  A little thing called “overhype.” People go in expecting Citizen Kane, and come out disappointed.  But I’ll tell you right now; Attack the Block is just a fun little film with some cool characters and fun action.  Nothing more.  Hell, looking back, I’d probably given the film a lower score in my review (somewhere between an 8.5 and 9).  That said, its a film everybody should at least watch once.  And who knows.  Maybe you’ll be like me and fall in love with it.  Or maybe you will think it was way to overhyped like a lot of other people.  Either way, it is certainly worth seeing, even just for a rental.  But me personally?  I’m buying it Day One, no doubt about it.  And hey, this time I can turn on the subtitles to understand what the bloody things they are saying!

Here’s the official synopsis, just in case you haven’t heard of it:

From the producers of Shaun of the Dead, ATTACK THE BLOCK is a fast, funny, frightening action adventure movie that pits a teen street gang against an invasion of savage alien monsters. It turns a London housing project into a sci-fi battleground, the low-income apartment complex into a fortress under siege. And it turns a crazy mix of tough street kids into a team of kick ass heroes. It’s inner city versus outer space and it’s going to explode.

Attack the Block will hit DVD and Blu-Ray October 25.