THE SET-UP
Years after the events of the original Peter Pan, Wendy’s daughter Jane discovers her mother’s stories were true, and Captain Hook still has a score to settle.
Directed by Robin Budd and Donovan Cook.

THE DELIVERY
Disney sequels have a dubious reputation; rather than feeling like a genuine continuation of certain stories, they often felt like a money grab. Most disheartening about these sequels is the distinct lack of quality compared to the originals; Disney often employed their television animation division to create these sequels, and it shows.

Which brings us to Return to Neverland, the 2002 sequel to the 1953 classic. Like many other Disney sequels, Neverland was produced by Disney’s television animation division for a direct-to-video release, but the studio decided to release it theatrically. It is easy to see why: the animation is actually quite good, and compares favorably to the original. It isn’t on the level of their modern classics, but it isn’t bad. The animation frame rate isn’t where it should be, but it is obvious the Disney artists really put some effort into this. As a result, Return to Neverland was a modest hit, and has enjoyed some success on home video as well.

The film is set a number of years after the original, right in the middle of the German blitz of World War II. Wendy is now a mother with two small children, and her husband is off at war. Her no-nonsense daughter Jane doesn’t care much for her mother’s stories about Peter Pan, Captain Hook, and Neverland, and she resents her mother for attempts to coddle her and her younger brother with them.

That all changes when Hook and company show up at her window, looking for Wendy and a chance at revenge. Jane is taken to Neverland, and it is up to Peter and the Lost Boys to rescue her. Jane, however, is no damsel in distress, exhibiting her own brand of girl power as they look to foil Hook’s plans.

While the film certainly looks great, and has most of the key Peter Pan elements (no Indians this time around due to political correctness), it really doesn’t have the spark of originality or sense of fun that the original had. It is far too serious for young kids to get into. The themes of war, conflicts with parents, and an extended section in which Tinkerbell almost dies slow the film down and send kids mixed emotions. When it focuses on the antics of Hook and Smee, the film picks up and is fairly enjoyable.

Also bothersome is the use of modern music at points, especially Jonatha Brooks’ use of a somber anthem for the film’s theme. I don’t understand the logic, especially when Disney owns the rights to the original music that could have been used again. The soundtrack does use a few of the musical themes at times, but they are brief.

Return to Neverland may not be a classic on the level of the original, but it works on enough levels to entertain most kids (very young children might find it tedious, however). The animation is excellent, and the film finishes strong. The voice acting is excellent: voice-over legend Corey Burton is absolutely fantastic channeling the late Hans Conreid to bring Captain Hook back to life.

A bit of trivia about the film: Clive Revill, who voiced the Emperor in the original version of The Empire Strikes Back, and Frank Welker, the voice of Megatron in the Transformers cartoons, both voice minor unnamed characters in the film. Blayne Weaver, who replaced the late Bobby Driscoll as the voice of Peter Pan, was actually in his mid-twenties when he pulled off the voice of the boy who never grew up.

VIDEO AND AUDIO
The high-definition video transfer is excellent, presenting a bright, bold image with nice detail and good color. The stills used for this review are screenshots from our DVD review copy,  so you can see the quality apparent even in the standard definition transfer. Audio is an excellent English 5.1 DTS-HD Master Audio soundtrack, with a deep, rich sound when the music stirs, and clear separation in the channels for the dialogue. French and Spanish 5.1 Dolby Digital tracks are included as well.

SPECIAL FEATURES
Five deleted scenes are included on the disc, several of which are musical numbers. They make for an interesting watch; one scene in particular made me wish it was included in the final film (a rare thing for often boring deleted scenes). It was a song written especially for Captain Hook (“I’ll Give You One Guess”) that was fun and catchy, a nice turn given the film’s often somber mood.

The Blu-ray set we reviewed included a DVD and a digital copy as well. I’ve become a fan of digital copies, as having Disney movies accessible by iPad, tablet, or smartphone via VUDU or iTunes is a nice extra for parents.

Return to Neverland never reaches classic status, but it has its moments, and the look is very much in line with the original. A strong technical presentation and some decent extras (especially if your little girl is a Tinkerball fan) makes this a solid release.

Click here to order Return to Neverland on Blu-ray combo pack from Amazon! 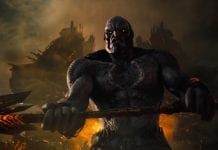