THE DELIVERY
Released in 1973, Disney’s Robin Hood is one of my personal favorites among their animated features, and I was excited to see that its release on Blu-ray gives it a richly-deserved restoration. The movie has never looked better, and will likely win over a new generation of fans drawn to its classic look and quirky humor.

Rather than focus on the plot – after all, it’s Robin Hood – I’d rather focus on what makes the movie unique. While the animation style is similar to other Disney features of the time, it made some odd stylistic choices, but they all worked. At first glance, it made little sense to tell a British legend with Roger Miller’s country music to set the tone, and use a number of southern-voiced American actors to fill the roles. However, Miller’s music (although Johnny Mercer and George Bruns also contributed songs), as well as his narration, fits perfectly with the underdog theme of Robin and the commoners against the spoiled royalty of Prince John.

Although Toy Story can boast a great cast, Robin Hood may have the best voice cast, top to bottom, of any Disney film. British stage actor Brian Bedford does a good job voicing Robin, and he’s matched by Monica Evans as Maid Marian. Phil Harris, who voiced Baloo in The Jungle Book, returns to play another Disney bear, as he voices Little John with a groovy 1960s vibe. Two-time Oscar winner Peter Ustinov, however, absolutely steals the show as a petulant, childlike Prince John. His delivery of otherwise clever lines are given an entirely new dimension of character, and his performance nearly equals Robin Williams’ role of Aladdin’s Genie as the best voice performance of a Disney character ever. He is perfectly paired with comedian Terry-Thomas, who voices Sir Hiss, to make a great duo of evil. If you aren’t familiar with Thomas, pick up It’s a Mad, Mad, Mad, Mad World and witness his unique brand of humor live. Western star Pat Buttram (aka Mr. Haney from Green Acres) is a load of fun as the Sheriff of Nottingham.

Among the supporting cast is western star Andy Devine as Friar Tuck, in what would be one of his final roles. The vultures, Trigger and Nutsy, are also voiced by a couple of Southern voices: George Lindsey (Goober from The Andy Griffith Show) and Ken Curtis (Festus from Gunsmoke).

With all of these great actors voicing characters, the filmmakers correctly chose to make this film less “Disneyfied” and more of a madcap, Looney-Tunes style farce that takes full advantage of the voice actors’ larger-than-life personalities. In-between all of the chases and over-the-top silliness, we get some truly funny dialogue and even some heartfelt romance, that yes, is far better than Twilight.

Some of the other Disney classics may be more epic, more timeless, and more sophisticated, but few are as fun to watch over and over as Robin Hood. Watching this film again on Blu-ray, I enjoyed it as much as I did as a kid watching it during one of its many theatrical re-releases. Oo-De-Laly, indeed.

VIDEO AND AUDIO
Robin Hood has been completely restored for the Blu-ray release, and it looks fantastic. Colors are much brighter and bolder, and you can even see the rough edges of the outlines of each drawing (which is not a bad thing). There isn’t a speck or blemish visible anywhere in the image. I really wish the special features included a look at the restoration; the box actually includes a side-by-side comparison of the difference, but nothing on the disc itself.

The audio is a newly remastered 5.1 DTS-HD Master Audio track, that takes the original, not-so-impressive sound from previous DVD and VHS releases and gives it true clarity and good definition between channels. The music, which has always been a highlight for me, sounds great. There is even a French 5.1 DS-HD track, as well as Spanish and Portugese 5.1 Dolby Digital mixes.

SPECIAL FEATURES
The Blu-ray includes a number of extras carried over from the previous DVD release, with a few new ones thrown in. A never-before-seen deleted storyline called “Love Letters” is included, which involves a plan by Prince John to lure Robin Hood into a trap with a love letter from Maid Marion. Storyboards and voice actors (new ones, not the original ones) help recreate what the scene might have looked like.

An alternate ending featured on the previous DVD release is included here, again using storyboards and voice actors to recreate the disposed ending. A “Song Selection” feature, which is different from the “Sing-Along” feature, allows viewers to chose four specific songs (“Oo-De-Lally,” “Love,” “The Phony King of England,” and “Not in Nottingham”) to watch and sing along to.

An art gallery of concept art is also included, told in storybook form with a young narrator who explains to young viewers how concept art works and the transition from concept to final screen version. There is even a quick look at the promotional artwork, posters, and some behind-the-scenes shots of the animators working on sketches and cels. The concept artwork, especially the abandoned ideas and concepts, are quite interesting.

The storybook essentially uses promotional artwork and stills from the movie to do a video storybook telling a condensed version of the film. The Sing-Along” feature actually plays the entire film with the words to the songs on the screen. That includes every song (including Happy Birthday) and every line even mildly sung.

Also included is a 1933 Mickey Mouse short called “Ye Olden Days” which puts Mickey in old England, where he tries to win the heart of Princess Minnie. In a strange twist, Goofy plays the villain, a prince who wants to marry Minnie. It’s a rarely-seen cartoon, and it has been cleaned up nicely and remastered in high definition, and looks fantastic.

Click here to order Robin Hood on Blu-ray from Amazon! 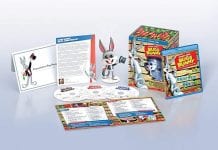