This Warner Archive release is a Manufacture-On-Demand (MOD) DVD. It is made to be played in “play only” DVD devices, and may not play in some DVD recorders or PC drives. This DVD, however, played with no problems in the Toshiba DVD recorder used for this review. This title is available directly from WBShop.com by clicking here.

A big-rig accident tears open the fences at a safari park. letting loose the dangerous animals within on the unsuspecting town nearby. Stars Dale Robinette, Carol Lynley, Philip Michael Thomas, Burton Gilliam, and a bunch of animals.
Directed by Peter Hunt.

I was intrigued upon learning that Warner Archive was releasing a 1978 made-for-TV movie called The Beasts are on the Streets. It sounded like a precursor to Jurassic Park, as a series of events causes the wild animals of a safari theme park to be freed and unleashed on the nearby small town. Sure, it was made for TV and produced by Hanna-Barbera (the production company behind The Flintstones, The Jetsons, and Scooby Doo), so I knew I wasn’t getting a man-eating gorefest, but the prospects still seemed tempting.

What I did get, when I received the movie, was a nice surprise. Not only is The Beasts are on the Streets a fun, entertaining little movie, I found I had a bit of a personal connection to the film. The locales in the movie seemed awfully familiar, and I learned it was filmed in Grand Prairie, Texas, a Dallas suburb near my home. The wildlife park featured in the film was actually named Lion Country Safari, one of a chain of drive-through wildlife parks that once operated around the country (one is still open in Florida). My parents took me to the park several times as a kid; in fact, for many years, my father’s work van sported a bumper sticker from the park showing a cartoon lion holding a sign promising “Trespassing visitors will not be eaten.” It was a great place, but I was wholly unaware of this film’s existence until now. In my defense, I was obsessed and distracted with both Star Wars and Superman in 1978.

Seeing the park I remembered as a kid was a real treat, but even for non-Dallas residents, the film is still an entertaining watch, with some impressive animal action. After a truck driver has a heart attack and crashes through the fence of a wildlife park, the various animals inside take off and run wild. Director Peter Hunt also helmed the James Bond film On Her Majesty’s Secret Service, and does a good job despite a TV movie budget and some big plot holes. Sure, one could argue that the park’s animals (which include lions, tigers, bears, camels, and buffalo) wouldn’t have been in the same fenced area and couldn’t escape through one breach. Don’t be that person. Just enjoy the movie.

Once the animals do get out, we get some really good “when animals attack” action, even though the film warns us at the beginning that all the animal stunts were supervised for safety. Still, I honestly don’t know how they got away with some of this stuff. We get tigers fighting bears. Tigers and bears running through a crowd of obvious extras. Lions attacking horses. Two stoners in a VW bug attacking ostriches. Rhinos attacking the stoners. Lions eating hunters. Bears attacking paddle boats. Panthers attacking station wagons. Famed character actor Burton Gilliam (Blazing Saddles, Back to the Future III) plays a redneck hunter. And Philip Michael Thomas of Miami Vice fame is along for the ride. It’s all awesome.

Sure, things plod along anytime the focus shifts to the actors. Yes, the logic doesn’t always fit. Of course, no kids are killed. The ending is a bit anti-climatic. Who cares? Just enjoy this original, creative slice of 1970s goodness for all it is worth.

The video transfer is average, even for a standard DVD. There is some minor debris on the screen, and the image overall is soft. Scenes at night don’t show much detail. Still, the image is far better than the bootlegs fans of the film have had to settle for in recent years. The stills used in this review are screenshots taken from our review copy of the DVD.

Audio is good, even for a Dolby Digital 2.0 mix from the original mono. The clarity is good, but the soundtrack sounds flat when the musical score plays.

None. There isn’t even a viewable chapter/scene menu, just a basic Warner Archive menu.

The Beasts are on the Streets is a lot more fun than it should be. It isn’t a great movie, but it makes up for its shortcomings with some great animal attacks. It’s definitely worth a watch, and if you remember and enjoy this film from back in the day, it’s worth buying.

Click here to order The Beasts are on the Streets from WBShop.com! 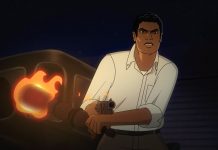