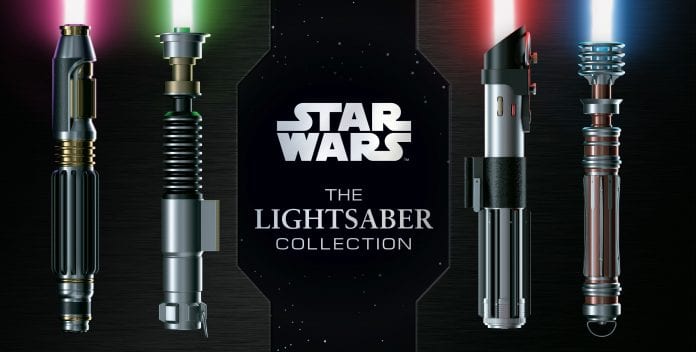 Travel to a galaxy far, far away with this comprehensive guide from Insight Editions featuring iconic lightsabers from the Star Wars galaxy!

The lightsaber is perhaps the most recognizable prop in movie history, with most every child around the world at some point pretending to wield one in their bedroom or on the playground. So, it is with great anticipation that we await “Star Wars: The Lightsaber Collection” from Insight Editions, which showcases some of the more famous laser swords from that familiar galaxy far, far away.

We’ve know about this book for months but they’ve been keeping a lid on what we could expect to find within its pages, the obvious ones notwithstanding. But, with the release of “Star Wars: The Rise of Skywalker” and the introduction of two new lightsabers (Rey, Leia), we knew something fun was coming.

Today, the folks over at io9 got the reveal on this gorgeous lightsaber which was one of those amazing details to come from TROS. Take a look at Princess Leia’s very own lightsaber! We knew Leia Organa had the Force coursing through her veins, but the amount of training she received was always up for debate. Being the daughter of Anakin Skywalker and twin sister to Luke Skywalker, it would seem only natural she would be proficient in the Jedi way, specifically wielding a lightsaber. But she chose a life of politics and rebellion instead, and it’d be tough to argue that it wasn’t the right decision.

So, when we were witness to a brief, but important training sequence between the Skywalker siblings, well, our collective minds were blown. It revealed so much about their time spent after the rebels were victorious, with Leia’s skills on full display, including her very own weapon.

As for the book itself (it’s not available until 10/20), it’s full of just about every other lightsaber that’s been seen on screen and here’s hoping Rey’s yellow bladed custom lightsaber makes an appearance as well.

From Luke Skywalker’s iconic lightsaber to Darth Maul’s fearsome double bladed hilt to Kylo Ren’s unique cross guard design, there is no other weapon more deeply entwined within Star Wars than the lightsaber.

Star Wars: The Lightsaber Collection (10/20; $29.99) is a comprehensive visual exploration of the numerous lightsabers found within the Star Wars galaxy, featuring favorite hilts from the movies, animated series, comics, and video games.

Filled with detailed illustrations of the series’ most iconic lightsabers, the book explores the intricate detail of the hilts and the brilliance of each energy blade, tales of each weapon’s construction, and additional anecdotes.

This stunning book is a must have for fans looking to discover more about legendary lightsabers and the warriors who wielded them.

You can pre-order Star Wars: The Lightsaber Collection by clicking HERE.

*All images courtesy of Lucasfilm/Insight Editions.