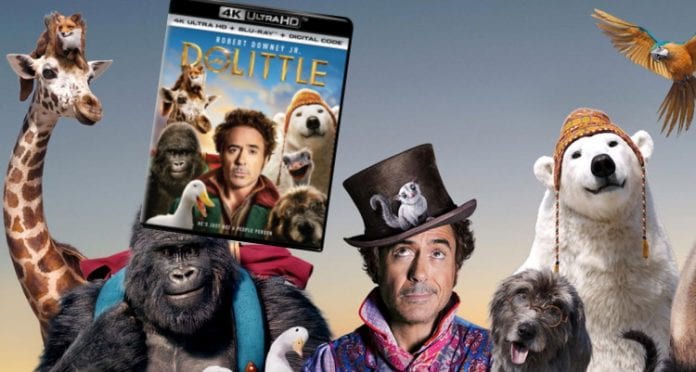 Own the movie all the animals are talking about and go an epic journey with a hilarious always cold bear, an anxious gorilla, a lovable giraffe, a ferocious tiger, and more! Fly behind-the-scenes with Robert Downey Jr. and the star-studded cast to explore the wild world of Dolittle.

Robert Downey Jr. electrifies as the man who could talk to animals: Dolittle. After losing his wife, he hermits himself away behind the high wall of his manor but is forced to set sail on an epic adventure when the queen falls gravely ill.

Catch incredible bonus content that you can only see on the 4K Ultra HD™, Blu-ray™, DVD, and Digital release showcasing the making of the film and insight to all the cast.

Blu-ray™ unleashes the power of your HDTV and is the best way to watch movies at home. It features 6X the picture resolution of DVD, exclusive extras and theater-quality surround sound.

You can preorder Dolittle on 4K, Blu-ray, and DVD from Amazon by clicking right here.