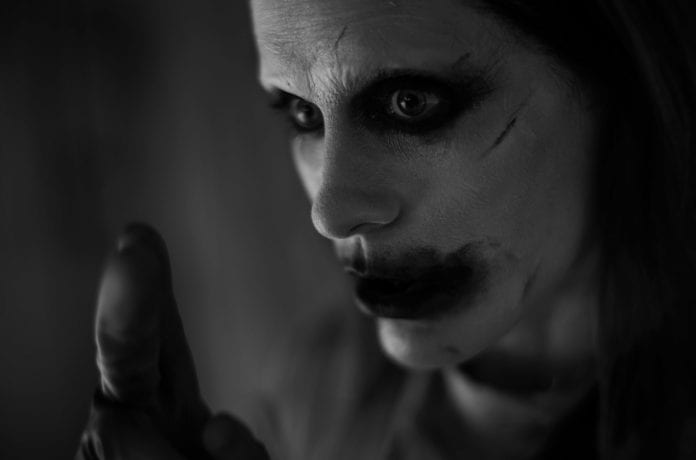 Jared Leto’s Joker as he appears in Zack Snyder’s Justice League is unlike we have seen him before.

Snyder introduces a new twist to complete his original vision for the DC Comics character.

Gone are the face tattoos and slicked-back undercut we have become familiar with, and hello to… well… potentially an even more unsettling image, one that has been described as “a creature who crawled out of the basement of a long-abandoned insane asylum.” We agree. This Joker dons a hospital gown and surgical mask which Snyder suggests is probably a remnant of his escape into the wild when the world fell. Jared Leto’s clown prince was not part of Snyder’s original plan before his clash with Warner Bros which resulted in him removing himself from the film back in 2017. But when HBO Max offered him the chance to realize his own cut of the movie, Snyder jumped at the chance. “The Joker is really the only thing that I thought of in retrospect,” the director told Vanity Fair. “But I will say that it was always my intention to bring Joker into that world.”

While putting your own twist on the Joker is not just expected but rather required if you’re going to take on such a project, the interesting twist that transcends the Joker on-screen aesthetic we were previously acquainted with is that Snyder chose to cast his Joker as Leto, who played the part in David Ayer’s Suicide Squad in 2016 although in a completely different way.

SPOILER WARNING – READ ON AT YOUR OWN RISK

(Spoiler warning) Joker makes his appearance in the film during a scene set on a destroyed Earth after the alien tyrant Darkseid decimates the planet. This scene, or dream-like sequence, reveals what will happen if the superheroes fail to stop the onslaught. Joker, naturally, supplys motivation through terror and torment.

“The cool thing about the scene is that it’s Joker talking directly to Batman about Batman,” Snyder said. “It’s Joker analyzing Batman about who he is and what he is. That’s the thing I also felt like fans deserved from the DC Universe. That is to say, the Jared Leto Joker and the Ben Affleck Batman, they never really got together. It seemed uncool to me that we would make it all the way through this incarnation of Batman and Joker without seeing them come together.”

“The scene explains why Bruce had the Joker card taped to his gun that you see in Batman v Superman,” Snyder says of his 2016 film, which also hinted that that Joker murdered the Caped Crusader’s sidekick by showing the absent Robin’s armor.

While this new Joker sequence answers some questions, it may raise other continuity questions: Is there tattoo removal in the apocalypse? What happened since we last saw this Joker in Ayers’ film? “I would say that there’s been some water under the bridge. Who knows what’s happened,” Snyder said. “I don’t know if he’s wearing makeup, I don’t know what’s happening. It’s hard to say exactly.”

Despite some lingering questions, we do know that Snyder’s version of Justice League will exist on its own. It will make use of some material from other DC movies, but the buck largely stops there.