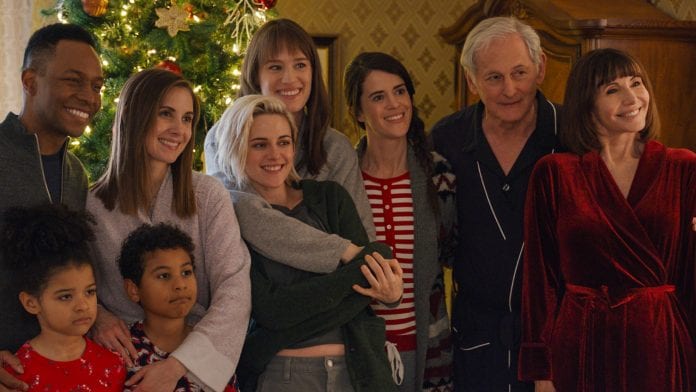 To say it’s been an insanely rough year for movies (and really every person around the world) would be a huge understatement. Due to COVID-19, less people are going to the movies. Therefore, more and more studios have delayed films back to the point that there isn’t much still releasing in 2020. (Check out our 2020 Movie Schedule to see what still is.)

With every film delay, the question always surfaces, “Why not release the film digitally, on-demand?”. Well, one movie will be making that switch.

Today, Hulu, Entertainment One, and Sony Pictures have announced that a deal has been struck regarding Sony’s holiday romantic comedy, Happiest Season. Hulu has officially acquired the U.S. rights to the Clea DuVall film.

“This holiday season — more than any other — we could all use a little happiness. It was essential to Sony Pictures and to the filmmakers that Clea’s marvelous and fresh holiday-themed romantic comedy come out when the lights are on the trees,” said Nicole Brown, President of TriStar Pictures. “We are excited that Hulu is geared up to make this happen in the U.S. and grateful that they love the movie as much as we do.”

“With its all-star cast and modern storytelling, Happiest Season brings yet another breakthrough film to Hulu that we know our viewers will love,” said Brian Kendig, Director of Content Acquisition, Hulu. “We are honored to be the streaming home of this fresh and funny romantic comedy that explores love, family and acceptance this holiday season.”

“I am beyond grateful to Hulu for providing an incredible home for Happiest Season, and I’ll forever cherish my journey with Sony Pictures who felt just as strongly as I did about the value of bringing the first major LGBTQ+ holiday rom-com to audiences,” said director/writer Clea DuVall. “I’m hopeful that this universal story, told through a unique lens, will join the long list of holiday classics that continue to bring all of us so much joy and happiness.”

In the U.S., Happiest Season will be found on Hulu’s streaming platform on November 25, 2020. However, for Canada and the rest of the world, Sony Pictures and eOne will still distribute the film to any open theaters. The companies will be finalizing theatrical release dates in the coming weeks.

The official synopsis for Happiest Season is as follows:

Meeting your girlfriend’s family for the first time can be tough. Planning to propose at her family’s annual Christmas dinner — until you realize that they don’t even know she’s gay — is even harder. When Abby (Kristen Stewart) learns that Harper (Mackenzie Davis) has kept their relationship a secret from her family, she begins to question the girlfriend she thought she knew. Happiest Season is a holiday romantic comedy that hilariously captures the range of emotions tied to wanting your family’s acceptance, being true to yourself, and trying not to ruin Christmas.