Surprise! If you’re eager for more live-action dinosaur action, you’ll get some with a short film, Battle at Big Rock, this Sunday on FX.

Since Jurassic World rebooted the dinosaur franchise, Universal has been making more use of it than ever before. With a series of LEGO shorts geared for younger kids, and an upcoming animated series on Netflix, there’s a lot of Jurassic Park/World content coming our way.

We still have to wait a bit for Jurassic World 3, which hits on June 11, 2021, but that doesn’t mean we can’t get a special treat ahead of time! Director Colin Trevorrow revealed on his Twitter an all new live-action Jurassic World short, Battle at Big Rock, will be debuting on FX this Sunday (September 15th).

Written by Emily Carmichael (who’s also on script duties for Jurassic World 3) the short film stars André Holland, Natalie Martinez, Melody Hurd and Pierson Salvador. That’s about all we know at the moment, but more details (including images) as set to hit tomorrow, so be sure to check back with us then!

Personally speaking, I LOVE this idea. There are plenty of stories to be told in the Jurassic World universe and with technology these days, it’s possible to make even short films look incredible. It seems like a great step in making some different stories/characters shine while still hooking fans up with something new. What do you think? 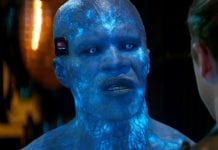