When Sony Pictures revealed plans to revive the Men in Black franchise, there was some understandable trepidation.  However, since they started putting the pieces together, adding Chris Hemsworth/Tessa Thompson/F. Gary Gray to the project, excitement for this film has been on the rise.  The first official trailer for MIB International only serves to help that, as it shows excellent chemistry between the two Thor: Ragnarok alums in what feels like a more intimate, close-up MIB reboot.

This is the first MIB International trailer.

The Men in Black have always protected the Earth from the scum of the universe. In this new adventure, they tackle their biggest, most global threat to date: a mole in the Men in Black organization. 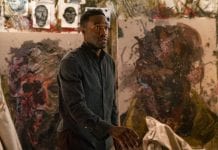