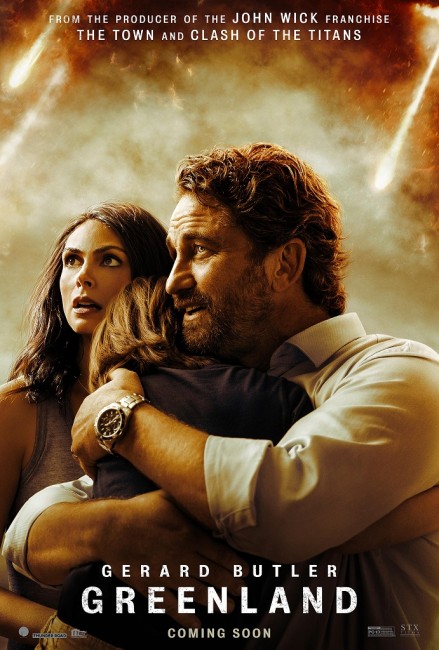 I’m a sucker for disaster flicks. The crazier, the better, and I generally don’t care if things tend to make sense. As such, I’ve been eagerly awaiting the arrival of Greenland. The trailers painted a picture of a fairly “standard” asteroid hitting the Earth and wiping out the planet kind of story, with a family struggling to find a way to survive. While that’s essentially the overall plot of the film, the result is a story I definitely wasn’t expecting to get. The film starts off as John Garrity (Gerard Butler) returns home after some recent estrangement from his wife. He’s back home just in time to help celebrate his son Nathan’s (Roger Dale Floyd) birthday. The kid, and the rest of the world, are excited about the prospect of a comet, called Clark, coming close to Earth which should offer a brilliant light display, but nothing too dangerous.

As they prepare for the party, however, John is given a strange message from the Government (one no one else seems to be getting) informing him his family has been chosen for a place within a classified underground shelter. Obviously this is in stark contrast to the information on the news about there being nothing to worry about. As they gather with family and friends to celebrate the birthday and watch one of the comet shards fall it soon becomes clear that something has gone wrong. Rather than plunging “harmlessly into the ocean” as predicted, it obliterates a large chunk of Florida, with an impact felt throughout most of the country.

Word comes that MORE of the comet is set to bombard the planet, including a piece large enough to be considered a “planet killer” that would set off a Dinosaur-esque extinction event. What follows is a race against the clock as the small family rushes to the airport to try and escape to safety before the planet killer makes impact. I don’t want to get into spoilers because there are actually quite a few turns their journey takes (from a kidnapping plot, medicine tracking, and some straight up racing/dodging) and how they’re resolved make up the true bulk of the story. Suffice it to say, their fight for survival gets complicated.

There are some familiar beats in the film, some of which feels like Roland Emmerich’s 2012 (will also sees a fractured family race across the planet to find some classified shelter), but takes a drastically different approach. For one, the action element is less bombastic. While there are plenty of “holy shit” moments that bring the threat into focus, it’s not constant set piece after set piece.

Normally, this would seem to be a negative thing, but for Greenland it really works. Instead, the focus is really put on the personal level and we see everything, even the destruction, from the point of view of the characters specifically. While this means we see a bit less, the result is intensely more personal and makes the stakes feel even higher.

Strong performances from Butler and Baccarin wrap you up quickly in their personal troubles, which we learn more about as they struggle to survive. Their devotion to their child and each other is genuinely engaging and makes for a disaster film with significantly more heart than most. This has the added effect of keeping the tension ridiculously high, even when the world isn’t blowing up around them, you feel continually on the edge of your seat, waiting to see what comes next.

About the only thing I struggled with in the film, is that almost TOO much happens. Any of the plot points that happens to them as a family could easily have been the “main” focus of the film. One pervasive thought I had throughout the film was how well it would work as a limited series, allowing some of those plot points more room to be explored. Maybe that’s just a credit to how strong the characters turned out to be that I simply wanted to spend more time with them.