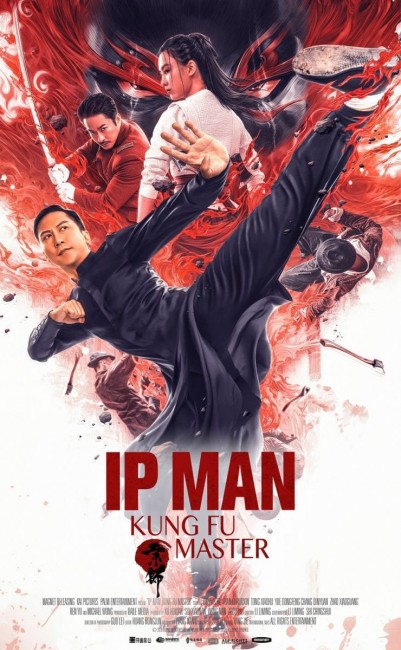 The latest film based on the life of Ip Man takes audiences back to the Martial Arts master’s past, chronicling his earlier endeavors with plenty of action. Check out our full review of the new release!

Ip Man, the Kung Fu master who trained the most famous Martial Artist around (Bruce Lee) once again comes to the big screen for another adventure. The man’s life has been covered fairly extensively via a slew of films (and even a spin-off). The movies, while highly entertaining, have always taken a romanticized/fantastical approach to biographing his life and only seem to get crazier as they go.

As someone who loves Martial Arts movies, however, I’ve found enjoyment from the action on display. Despite the previous Ip Man film being titled, The Finale, filmmakers have found another portion of the man’s life to showcase. This time we go back to the past in a Prequel, which also serves as a Sequel to Ip Man: The Legend is Born.

Dennis To is back to portray the younger Kung Fu master (technically making this his third time, but Kung Fu League isn’t really part of the series) back when he was a police officer. It’s early days for the legend, which offers up plenty of opportunity for the story to play around.

Kung Fu Master kicks off as Ip goes to arrest the leader of the Axe Gang in his own compound. After having to fight through hordes of his minions, he reaches his goal and takes the man to jail. Here, Ip is confronted with the rampant corruption within the police force, a running theme throughout the film. Ip is constantly up against doing the right thing, no matter the hardships it brings him.

Ultimately, the mob boss is killed in jail by the encroaching Japanese army/gangs. As Ip faces the blame for the murder by the mobster’s daughter (hellbent on vengeance) and an even more corrupt police department, he leaves the force and goes into hiding. There he struggles to find a way to still do the right thing and bring the real criminals to justice. The result, of course, is a whole bunch of ass-whoopings delivered throughout the film’s 84 minutes.

All of the Ip Man films are highly fictionalized, but this one takes it to another level that doesn’t always work. Hell, there’s a whole massive fight scene that goes down while his wife is in labor. Just outside the door, he’s busy holding off the Axe Gang out for vengeance. The action itself is impressive, but the circumstances just made it humorous and lacking any real tension.

Then, once Ip Man quits being a police officer, he ends up donning a Batman-esque mask to fight crime and keep his identity protected. It’s…strange. It’s really strange because the steps taken to get there really don’t make a whole lot of sense.

This actually speaks to a deeper problem with the film overall. It makes big leaps in where the story goes and expects us to follow without question. Too often, however, those jumps make little-to no-sense. One moment, we see Ip Man take his family into hiding (kind of), the next we see some group of kids fighting, only to be interrupted by another kid wearing the Black Mask. We don’t even see what happens next with the kids, but as they’re walking away we see someone (presumably Ip Man) pick up the fallen mask.

I have no idea who those kids were (they never popped up again), but their sole purpose seemed to be to give Ip the mask he then uses to go around playing superhero. It’s just such an odd way to cut the moment together and relies on viewers to fill in the gaps. This is far from the only example as well, especially when the woman out for vengeance against Ip seemingly becomes a News Reporter out of nowhere.

On top of that, the film seemed to delight in “tricking” viewers into what’s coming next, then using flashbacks to explain it away. This wouldn’t be so bad, and I’ve seen other movies use it as an effective device, but it just doesn’t work here. Not only do they feel oddly placed, but the fact that the flashbacks don’t fully explain everything and still require big logic leaps, makes them feel frustrating.

The action itself, which is the main reason people will be tuning in, is pretty solid. They have some impressive moments, and “holy shit” sequences that keep your eyes glued to the screen. Without the emotional attachment behind them, however, they fall a little flat. Not to mention they don’t do anything particularly new that the other Ip Man films haven’t showcased before, and the outcome never feels in doubt.