As the face of law enforcement in America for almost 50 years, J. Edgar Hoover was feared and admired, reviled and revered. But behind closed doors, he held secrets that would have destroyed his image, his career and his life.

I honestly wasn’t sure what to expect when I popped J. Edgar into the blu-ray player. These biopics tend to vary a great deal, and I wasn’t sure exactly what I was in for. J. Edgar is a polarizing character in history and could have been portrayed in any number of ways (from villain to hero). So imagine my surprise when I find a movie that’s about as well balanced as it could be.

Clinty Eastwood has done a great job in showcasing the man J. Edgar Hoover was. He exhibits Hoover’s flaws right along with all of the good things he did for law enforcement and the FBI. I was truly surprised at how well this balance was maintained, and instead of feeling like the movie was guiding me to an opinion, it left the door open for me to judge for myself. It didn’t force an agenda down my throat, but instead presented ‘facts’ (I use the term loosely here because it is still a movie) that allows the audience to draw their own conclusions.

Some will look upon him as terrible monster, while others will see a patriot that was a little misguided. The joy is in that two different people can get entirely different experiences from the same movie. It’s about as close to a true historical film as I’ve ever seen. 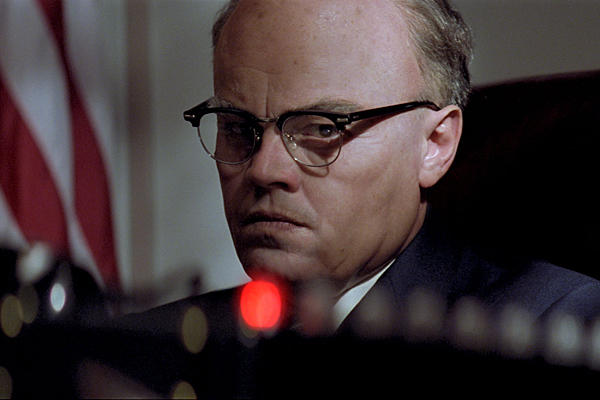 Granted, the film still takes some liberties, but that’s to be expected. The only real problem with this type of balanced presentation is that the film lacks any kind of real conflict. While everything presented is interesting and I felt compelled to keep watching, I feel that’s more due to the brilliant visual finesse and treatment of the characters than any real conflict. In truth, the story is about J. Edgar and the people in his life. It’s not about any ONE particular instance in his life, so even though there wasn’t any sort of resolution at the end, in the typical sense, it was still pretty fulfilling.

Honestly, I was most impressed by how Eastwood handled the more controversial issues of Hoover’s life (i.e. the supposed homosexuality and cross-dressing). Even though they were brought up and played a big part in the film, they were treated tactfully, so that once again nothing felt slanted one way or the other. The audience is still left to decide and think what they will.

The blu-ray transfer looks amazing and really helps make the period set pieces stand out and look as vibrant as if you were actually looking into a window of those times. Sadly though, the special features are pretty lacking, and don’t give you much more of an experience.

J. Edgar is a great experience, and might be one of the best biopics I’ve seen in quite some time. It doesn’t demonize, nor glorify, the man, but it does paint a vivid and impressive picture of his life. It’s well done and I plan on keeping it as part of my collection.

J. Edgar (which is available now on DVD/Blu-ray and digital download) gets a 9 out of 10

– The acting was superb all around, and the casting was spot on.

– Being a police officer myself it’s interesting to see some of the origins of the law enforcement techniques I use today.

– Even as an old lady…Naomi Watts still looks hot.