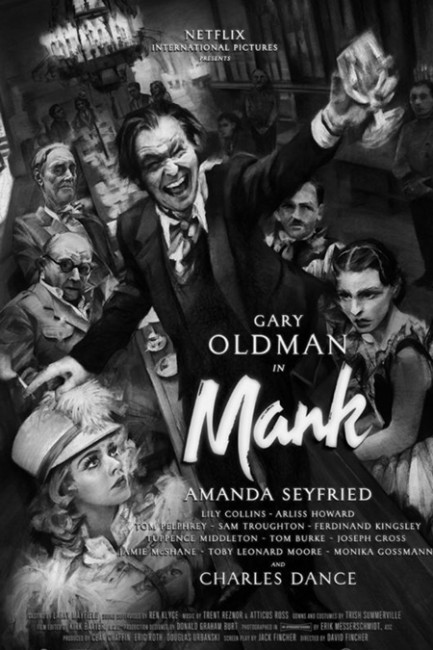 Mank is the chameleon of David Fincher’s filmography. It disguises his subversive tendencies in genre film staples. What you get out of the film depends on how you decipher Fincher’s distinct approach.

The glory of old Hollywood has been a topic often visited in film. It is a place filmmakers love to visit not just because it the topic of filmmaking is something they are very familiar with, but because audiences find enjoyment in it as well. We all have fond memories of the films, actors, and filmmakers of yore who inspired us and changed our lives. For the biggest films of the past there is always interest in how and why they were made in the first place. The bigger or more popular the film or person, the more interested we become in their story and inspirations.

Mank is the story behind the inspiration of one of the greatest films ever made, Citizen Kane. In the vein of those films which have revisited Old Hollywood, Mank has surface-level attraction by merely peeking behind the curtain. But this is not the only purpose of this film. Director David Fincher utilizes the story behind the inception of Citizen Kane to drive at other ideas and make additional connections to our modern times – not just our contemporary Hollywood, but also the harsh political climate we find ourselves so uncomfortably situated in. That may come as some relief to those who saw David Fincher’s involvement in this film and may have thought he had gone soft. Fincher is known for his films which don’t pull any punches. They are controversial, dark, and subversive. Mank is no exception. This isn’t merely a historical recreation in an attempt of honoring one of Hollywood’s greatest achievements. Mank is an excuse for Fincher to explore the faults, hypocrisies, and weaknesses of Hollywood by exposing the truth behind one of its most celebrated successes.

But it isn’t all about hate either. Fincher finds a fine line to walk between penning a love letter to classic Hollywood and burning it down altogether. There are moments of the film when it feels like Fincher is venting his anger against the system. But then he follows up those harsh sequences with moments that make us remember why we fell in love with Hollywood in the first place. He gives us moments of inspiration, and for those of us who can appreciate the history of film, there is certainly a magic feeling seeing this classic era brought to life from an unexpected source. With an emotional score, first-rate production, and whip smart dialogue, the film echoes the style of classic cinema, yet remains consciously modern in its presentation and approach.

So don’t worry, Mank isn’t just another movie about making a movie. In fact, the film is hardly concerned with Citizen Kane at all. Instead it is concerned about the real people whom its characters are based off of. The film follows Harman Mankiewicz, an accomplished alcoholic writer. While recovering from injuries sustained in an auto accident, Mank dictates his great American screenplay from his bed. While Citizen Kane unfurls from his mouth, the film utilizes flashbacks to add context to both the story of the film (not unlike the narrative structure of the film Mank is dictating) and Mankiewicz’s inspiration for writing it. During these flashbacks, we learn about his connection with media mogul William Randolf Hearst, and his lover (actress/comedian Marion Davies). Over the course of the film, we witness how Maniewicz’s relationship with Hearst turns from curious admiration to mutual disgust. The heart of the issue between them comes down to contrasting economic status. The film goes out of its way to characterize not only the egotistical behavior of the Hollywood elite, but also how they justify their behavior to themselves while they take advantage of the underprivileged.

Caught in the middle of this class war is Mank himself. His abilities and quick wit have earned him the admiration of these studio heads, and they are able to grant him the opportunities to further his craft. Yet at the same time he witnesses their despicable behavior, and knows it is wrong. The fact that David Fincher is telling this type of story via an avenue not dependent on traditional Hollywood production (Netflix) should not go unnoticed or overlooked.

Mank himself is a very interesting and conflicted character. The first few scenes of the film he is hardly coherent. When the audience first meets him, he’s already a wreck (both literally and figuratively). The film doesn’t bother showing us his back story except as it pertains to his writing of Citizen Kane. Some may see the film as a biographical drama, and accurately point out how the script doesn’t really make us feel compelled to believe in the character. But I feel this perspective on the film doesn’t really do it any justice. This isn’t meant to be a traditional biography, it’s a character study.

Mank is not dignified in the traditional sense. That’s Fincher’s point. The way he carries himself is no different than his peers and his bosses. Gary Oldman portrays the character with a sense of amused vitality which defies the age of the veteran actor. He seldom holds back his opinion even if it ends up costing him. While married he flirts with younger women, is drinking constantly, and appears to be just as selfish as the suits whom he despises. Yet Fincher provides us with these little moments which show his caring side. He tries to do the best thing. That is really the crux of the film. Mank’s decision to write the screenplay for Citizen Kane isn’t just for his own glory. It’s an act of retribution.

But while the film gives its audience the opinion that Mank’s decision to pursue this screenplay is ultimately the right thing to do, it is not so cut and dry. For one thing, his vicious satire of Hearst hurts those who are close to him, many of which are friends (and family) of Mank. But more importantly, Mank comes to realize how the best thing he has ever written is also the thing that will destroy his career. As a writer, he feels compelled to reach his full potential and isn’t concerned with the cost. His friends and family have other perspectives. Don’t make the mistake of thinking that this film is historically accurate, or is supposed to be. Mank simply uses its setting to weave a story that feels a bit timeless, even if it isn’t. This is a more creative version of The Crown, with Fincher giving characters who may have been real people the words to tell his story, not theirs. From certain perspectives the way the story is told may seem very convoluted. Indeed, the witty but dense and often riddle-filled dialogue feels self-indulgent. Fincher creates his film in a way for those who are inside Hollywood’s sphere of influence to find something to latch onto, but I’m afraid it will offer very little for those who are outside of it (casual movie watchers).

So, on one hand Mank is a very creative and interesting film. It honors the past and present concurrently in an innovative and meaningful way. However, the film’s trick of trying to look like one thing while being another does limit its ability to do either of those things truly well. I applaud David Fincher’s ambition, and thanks to his technical expertise he nearly pulls it off. But there are just enough rough edges to snag the audience’s sweater. But, when you think about it, Fincher hasn’t ever been the kind of film maker to want his audience to become comfortable. Even if he invites us into his latest film with the lure of Old Hollywood charms, I think he ends up leaving us precisely where he wants us.