Columbia Pictures’ Moneyball is based on the true story of Billy Beane (Brad Pitt) – once a would-be baseball superstar who turned his fiercely competitive nature to management.  Starting the 2002 season, Billy faces a dismal situation: his small-market Oakland A’s have lost their star players (again) to big market clubs (and their enormous salaries) and is left to rebuild his team and compete with a third of their payroll. Driven to win, Billy takes on the system, challenging the fundamental tenants of the game, by looking outside of baseball, to the dismissed theories of Bill James, and hires Peter Brand (Jonah Hill), a brainy, number-crunching, Yale-educated economist.  Together, with computer driven statistical analysis long ignored by the baseball establishment, they reach imagination-defying conclusions and go after players overlooked and dismissed by the rest of baseball but who all have key skills that are universally undervalued.  As Billy and Peter forge forward, their new methods and roster of misfits rile everyone including their own uncooperative field manager (Philip Seymour Hoffman). Ultimately this experiment will lead not only to a change in the way the game is played, but to an outcome that would leave Billy with a new understanding that transcends the game and delivers him to a new place.

Written by: Steven Zaillian and Aaron Sorkin, based on the novel by Michael Lewis

It’s been awhile since a new baseball film has hit the cineplex and Moneyball has everything that makes baseball films great.  With a stellar cast, superb writing and fantastic cinematography, this one is surely going to be a contender in the upcoming awards season.

The first thing that stands out about Moneyball is the obvious fun that every member of the cast had while filming.  After all, baseball is supposed to be fun and that is exactly what Moneyball is.  Virtually no trace of any of the usual “actor” essence is here, eradicated by a cast and crew that simply seemed to love making the film as much as the players love to play the game.  This wonderfully entertaining experience is what it’s all about and I believe is always the first true mark of a great film.

While at first glance it may seem that Moneyball is resting everything on the global star power of Brad Pitt, I can say with all honesty that it doesn’t and it doesn’t need to.  This is a definitely a duo piece and while veteran Pitt shines as GM Billy Beane, it’s the astounding performance of Jonah Hill that will blow you away.  Hill, who made his start in raunch-comedy, has progressed to a level I frankly never saw coming, honing his natural talents to a fine edge.  While he does still rely upon his naturally comedic manchild performance structure, there is something new here.  Something palpable and divinely real.  His chemistry with Pitt is utterly brilliant and this may just be his first real mainstream breakout role.

Rounding up the lineup of greatness are the technical aspects of the film.  The writing, visuals, audio, and all manner of behind-the-camera work are terrific, and though nothing is truly a perfect 10, Moneyball scores 8’s across the board and that is a true feat.  Every crack of the bat, every cheer from the audience, every whump of ball-hitting-glove is fantastically captured and brings the film to incredible life.  Visually the game is captured through the eyes of those who simply love the game, any sense of pretense or overbearing rattletrap gone.

And fueling all of this is the stellar writing of Sorkin and Zaillian whose ability to conjure every facet of intelligent dialogue is evident here.  Witty, snappy, snarky, and heartfelt, the energy never dips and the comedy hits keep rolling from start to finish.

The only thing I could possibly say negative about Moneyball is the underuse of the supreme talents of Philip Seymour Hoffman and Robin Wright.  Such veteran actors deserve to be more than “plot vehicles” but nonetheless, with the little they have to work with, they are excellent.

Hoffman as the uncooperative, curmudgeonly field manager Art Howe is the perfect foil for Pitt and Hill, their unstoppable force balanced by his immovable object.  While obviously not exactly a challenging role for Hoffman, he performs the role to the hilt, drawing every ounce of meat he can out of what he has to work with.

Wright is charming as usual, but despite her appeal, the lack of substance to work with leaves her somewhat disengaged, like an actor showing up for two days to film a scene and then leaving altogether.  I would hate to say that casting Ms. Wright could be a justification of budgetary freedom, but if the shoe fits. 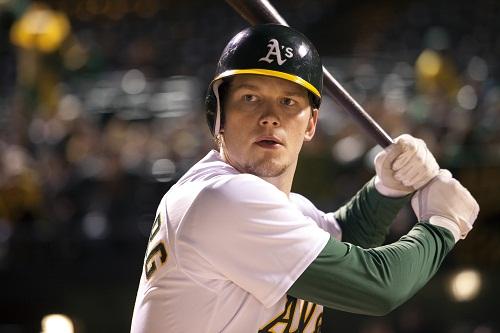 Acting: Excellent acting on behalf of Pitt, Hoffman, and Wright, but it’s Jonah Hill who truly steals the show in this fantastically fun film.

Writing: Top-notch writing from Aaron Sorkin and Zaillian.  We wouldn’t expect anything less from the pairing of these two, their witty, snappy, and snarky dialogue keeps the excitement rolling from beginning to end.

Directing: Without a doubt, Millers’ direction is exceptional and this is first-rate filmmaking-101.  I expect great things from him in the future.

Sound: Never before have the sounds of the game been so crisp clean, and inspiring.  The crack of the bat is one of the most beautiful sounds in the game.

Visuals: Lovingly crafted and framed, Miller captures the essence of the game from the eyes of those who just love to play it.  All of the power of Any Given Sunday and comedy of Major League without the sappy, sloppy, or sordid underpinnings to bog it down.

With its fantastic acting, direction and writing, Moneyball is easily one of the best films of the year, another contender for the upcoming awards season.