I feel the need to say this right up front.  If I don’t, you may get the wrong impression about how I feel on this movie.  What you’re going to find below in this review are some spoilers (I’ll try not to be too blatant) and a lot of criticism.  Here’s the thing though, I really did enjoy this movie, and encourage you to see it.  It’s worth your time, and, like I said, it’s had my brain working around it since I exited the theater.  It’s a visually stunning film, features some deep themes, and is a good movie.  Yet there are things that hold it back from being a great film.

I will say that the biggest problem Prometheus had, was that it’s clearly a set up for a sequel or a much larger story.  Prometheus did little to answer any of the questions it posed throughout the story.  From the get go, it’s lets you know that the story behind it is far larger than the smaller story we actually see take place.  The ending leads directly into a sequel, and by that time, you get the feeling that this is where the film was going the entire time.  None of the questions posed were intended to have answers in this film, but were merely setting the stage for what’s to come.

While in the long run this could turn out to be part of something awesome, for now, it really hurts Prometheus as a standalone movie.  Because of this, many movie-goers will find themselves thoroughly confused about what the hell is going on.  The story contained within the movie is fairly straightforward.  It’s basically Alien, where bad things happen, and people start dying.  Yet, the overall themes of the film are much further reaching.  It’s in those themes, and the way certain characters present (or represent) them, that people find themselves lost in.  There are no clear answers given to the many questions posed, and thus it makes the experience more frustrating.  Maybe when a sequel does come out and can be watched along with Prometheus, these things will no longer be an issue, and it can be enjoyed for the film it is, but as it stands now…it’s bothersome.

The other major problem with the film is the severe lack of understanding any of the characters motivations.  Outside of the one individual, Elizabeth Shaw (Noomi Rapace), you have no idea why any of the characters are doing anything.  You can’t decide if they’re antagonists or protagonists, as at various parts of the film, they all seem like they could be either.  Everyone seems to have different motives for what they’re doing, but those motives are never clear to the viewers.  There are some inferrences made here and there, but once you think you’ve got it figured out, they do the exact opposite of what you assumed their goal to be.

I can’t figure out exactly why that it.  The writing seems to be smart enough to not run itself into those kind of traps, and Ridley Scott is a good enough director to not catch them either.  This leads me to believe that there might have been some things cut from the film, that would have gone a long way towards clarifying things.  Michael Fassbender’s android character, David, is the most confusing.  Nothing he does, has an explanation.  You know he’s got an ulterior motive, but for the life of me, I couldn’t figure it out.  Spoiler Time!

Case in point, mid-way through the film, David ‘poisons’ Charlie Holloway (Logan Marshall-Green) with the alien DNA stuff they find on the planet.  This cause Charlie to contract a disease (eventually dying) and ends up getting Elizabeth pregnant.  Throughout all of this, David acts like a cruel bastard, and seemingly wants Elizabeth to conceive this alien-hybrid child, even if it means killing her.  Yet, by the end of the film, David reaches out to Elizabeth to save her life and help her…What the hell?  His sudden change makes no sense, and Elizabeth allowing David to help is even more mind-boggling. Spoilers Over!  What it essentially boils down to, is that all of these unanswered questions and ambiguous motives feel like they could be massive plot holes.  I’m having a hard time believing that though, and I’m hoping that it was directed more subtley than what I was able to pick up.  On top of that, the film really does give you plenty of clues to formulate your own theories (and believe me, all I’ve been doing is coming up with my theories!) on what’s happening and everyone’s possible motivations, but it refuses to confirm or deny those theories.  That’s the frustrating part.

Okay, I think that’s enough focus on the negative (at least as far as a review is concerned), so let’s talk about what worked in the film.  First and foremost, Prometheus is a visually stunning movie.  It’s a Sci-Fi spectacle on the grandest scale, and it looks gorgeous.  Hell, the first scene of the film, doesn’t even feature any real effects (until the end of the scene) but it was still incredible to watch.  Ridley Scott knows how to make a film look good, and he’s pulled out all of the stops here. 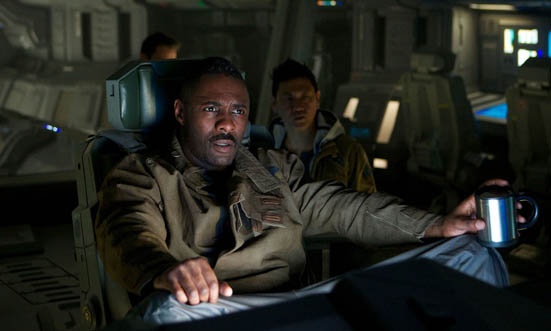 Let me talk a little about 3D for a second.  Scott has done a lot of talking about 3D since filming Prometheus, and even made the statement that he didn’t want to film in anything else again.  I will say that the 3D looked good in this film.  You could tell there was planning behind the shots, and it was never thrown in there just because.  However, all it really did, was give the film depth and a greater sense of space between the characters.  While the effect did look good, I can’t say that it would have looked any worse in conventional 2D.  None of the impact would have been lost, and it would still have been a gorgeous films  I think the best thing I can say about the 3D is, for once, I didn’t feel like I wasted money on the ticket for it.

Another excellent part of the film was the acting.  Truly, the performances of the actors is one of the reasons I believe all of those frustrations I mentioned above are not plot holes.  Most of the main cast (not the ones solely there to be killed off) all seemed to have various depths and layers to them.  In short, they felt like real people, with real goals; even if we didn’t get to figure out what those were. It’s a pitty that many of the other characters didn’t get the same treatment (especially because some of their decisions made little sense), but they weren’t really around long enough for you to care. One thing you can’t discount from Prometheus is the fact that it is an enjoyable/fun movie.  If you take away all of the themes and ideas, you’re still left with a movie that can be enjoyed.  There were several moments I was on the edge of my seat, wondering what was going to happen next, and I can say I felt engaged in the experience the entire time.

Overall, I want to emphasize the Prometheus is worth your time to see.  Personally, I love movies that have me constantly thinking and analyzing it, well after I’ve seen it.  I can see why this would upset many other movie-goers however.  Even so, I feel there is enough in the movie that’s pure entertainment to keep one happy as well.  My sincerest hope is that we get a sequel to this film, and all of these questions and theories find an answer.  I feel that Prometheus would be far stronger for it, as would the entire Alien franchise.