The latest Harry Potter movie is filled with some large set-pieces that are quite amazing to look at.  The action is impressive and there is plenty for everyone to look at.  It’s the small scenes, however, that set this film apart and make it so powerful.  The focus on the characters and their relationships drove this movie, making it emotionally gripping.  So it’s no surprise the best scene isn’t a big VFX packed action sequence…it’s actually a small piece where Harry and Hermione dance.

Sounds kind of ridiculous doesn’t it?  Now, I’m not going to be giving out any big spoilers here, but I guess there could be some minor ones in here.  Believe me it’s nothing major though.  The scene I’m talking about comes roughly half-way through the film.  Harry and the gang are out wondering the forest while they search for the Horcruxes, when Harry and Ron get into an argument (Ron becomes paranoid about Harry and Hermione getting ‘too close’).  Ron ends up leaving while Harry and Hermione continue the quest.

Needless to say, Hermione is very upset at losing her love so what we get for a few minutes after is a montage of them moving from location to location, while Hermione looks sorrowful and depressed.  One night, as they’re listening to the radio (spouting off the captured and dead wizards) in awkward silence, Harry gets up and changes to station to some livelier music.  After which he extends his hand towards Hermione. 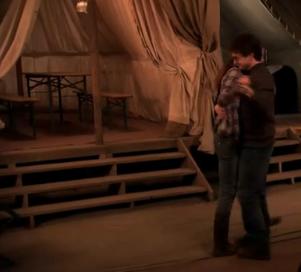 It’s a touching moment, and the tension is surprisingly high because she hesitates.  You’re not sure if she’ll accept his odd offer, nor are you sure if you want her too…I mean, isn’t this exactly what Ron was afraid of?  She eventually takes his hand and allows him to lead her out into the center of the tent.  They stand there, uncomfortable for a bit, when Harry begins to dance.

It’s goofy!  It’s not very coordinated, but Hermione finally gets into it, and for a brief time we see them dancing and spinning, and even smiling.  The moment passes quickly though, as they share a quick embrace and Hermione goes back to brooding.  So why in the hell is this so important?  The theme of this film is shown beautifully in this one simple scene (even more impressive is that this is a scene not in the book). 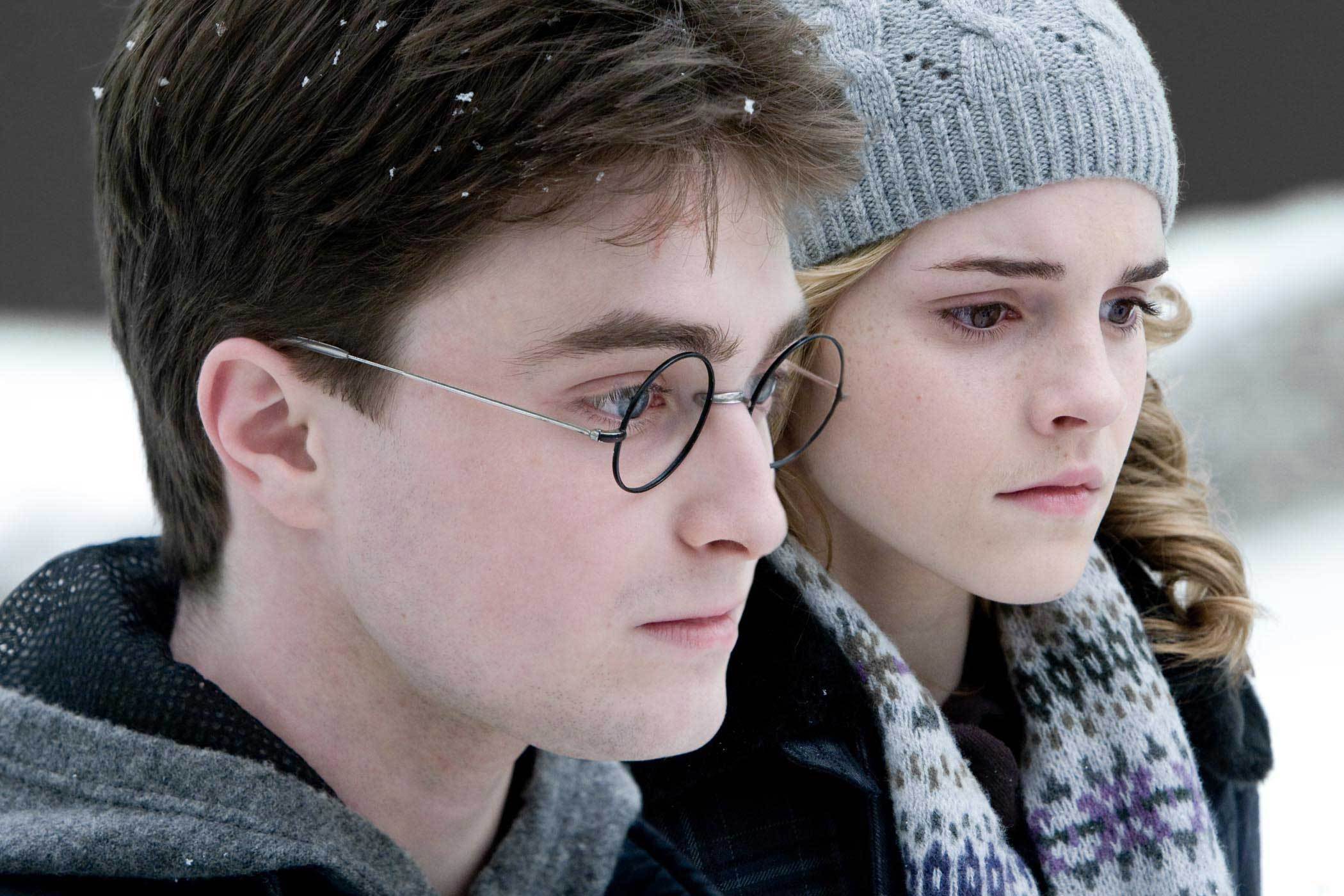 Early in the film, characters talk about the point of having a wedding during these dark times…to which Harry responds “maybe that’s why”.  The one prevalent theme in all of the Harry Potter books and movies is the ability to find happiness and joy even during ones darkest hour.  The story is about relying on friends and surrounding yourself with people who can support you and make you laugh when you feel like crying.  Now the characters are essentially embroiled in a war, this idea becomes more important.  Since Harry’s friends have always been there to help him when he’s down or in need, it’s nice to see him actively reach out (doing something he wouldn’t normally do), in order to reciprocate and cheer up his friend.

It does a great job of showing the camaraderie between them, and it’s here more than ever, their true friendship really comes out on screen.  You get a sense of history between them, of actual caring.  They both gave great performances which really pulled this off.  None of it felt phoned in or like it was acting.  The emotion felt genuine.

Even more so than those reasons, this scene proved once and for all Harry and Hermione are nothing more than incredibly close friends.  There’s nothing romantic in the gesture.  Sure it seems to start that way, but it becomes clear very quickly, this is platonic.  Even as they embrace and pull apart, you can somewhat feel a moment where they might kiss, but you look into their eyes on screen and know it’s not going to happen.  That’s not what either of them want, so they separate.

It’s a small scene, but an incredible moment in the film.  It aptly demonstrates the theme for not only this film, but the entire series.  Above all else, we have to remember this is a story about friends, and being there for them no matter what.  Even in our world today, it’s an appropriate message.  It’s a reminder that no matter how bad things get, you need to enjoy the moments of levity and joy…no matter how brief they may be.  That’s why this scene is by far the best.

Disagree?  Be sure to let us know what you thought was the best scene in the film.