Rango stars Johnny Depp as a tank grown chamaleon with a passion for acting and an identity crisis to boot.  While Rango tries his best to live an exciting life in the confines of his tank, he feels he is meant for something much more.  Rango gets the chance to prove himself when he gets stranded in the Mojave desert and lands in the town of Dirt.  Feeling he could use the recent events to reinvent himself, Rango decides to forge the persona of a tough as nails outlaw who could kill a man without much effort.  But as Rango will soon find out, a lie can only go so far before things get out of control.

Most times, it seems rather lazy for a reviewer to compare a film as a combination of other films.  That said, the first thing I thought coming out of Rango was, “Boy, that was like Fantastic Mr. Fox meets Shrek meets The Three Amigos.” Like Fantastic Mr. Fox, Rango is weird and a little bit, shall we say “unhinged” in its humor.  Like Shrek, Rango spits out pop culture refrences faster than you can say “Hey, I get it!” Sure, they’re all Western themed, but same principals apply.  And like The Three Amigos, Rango takes the idea of an actor playing a role in real life and runs with it.  It seems like a combination destined for success, right?

Well, I’m sorry to say Rango never exactly reaches the quality of those films (well, maybe The Three Amigos), but it’s still a fun time in its own right.  A grab bag of Western themes, Rango seems hell bent on throwing out every reference to the genre it can.  Well this could easily spread into Shrek the Third level of annoyingness, Rango has just enough charm for it to remain entertaining.  Johnny Depp is great as Rango, a strange cross between Hunter S. Thompson and Jack Sparrow.  Also, he has a surprisingly good Western accent.  Sure, it’s not perfect, but since Rango is suppossed to be manipulating the accent anyways, it serves its purpose.  But all and all a wonderful performance.  In fact, all the performances are pretty good.

The visuals are simply breathless. Well the Mojave desert is as boring a location as they come, the film is able to make everything else stand out so well you hardly notice.  The character design, well grotosque, is quite good.  And the action scenes are filmed in such a way that everything feels real and fluid.  Everything seems to pop out of the screen.  Well I certainly respect Vebrinski’s decision to not convert this film to 3D, this would have been one of those films that it would have served well.

The music is good, but a slight disappointment judging how it was composed by Hans Zimmer.  Although I give props to the singing owls.  The singing group of characters in an animated film can easily grate on the nerves (I’m talking to you, Flushed Away), but these singing owls have catchy music and are really funny.  But well all this stuff is good, the best part is easily the script.  Its smart, quick and, dare I say it, ORIGINAL.  For once an animated film wasn’t trying to appeal to the lower demographic of its audience.  Such a refreshing sight for an animated film. 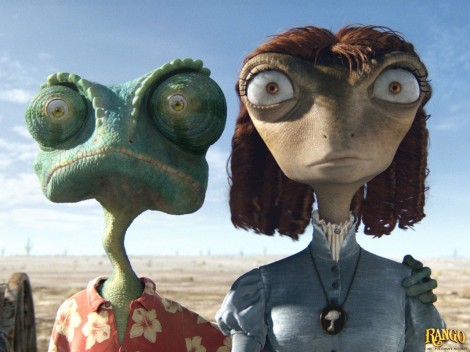 As I’ve stated above, I greatly enjoyed the plot.  However, one issue I had with it was its overabundance of Western references.  Honestly, it’s not a fault of the film; it’s a fault of mine.  I’m not a huge fan of Westerns, thus I haven’t seen many.  So when Rango would make reference to a film I haven’t seen (which is a lot), I didn’t quite understand it.  While I know it doesn’t impact the film in a negative way, it certainly impacted my viewing experience.  And the film pretty much relies on these jokes during the second half; a little more variety of gags would have been appreciated.  But judging how my only complaint of the film is “Mes don’t get it,” I think its not a big issue for film buffs; but mainstream audiences, however, may be left in the dark.

And while isn’t a thing against the movie, I wouldn’t really recommend it to someone below the age of 10.  Its simply to clever for the children to understand.  That too and some of the jokes are a little bit raunchy.  Mentions of prostates, lesbians, sex, and the like.  Well I’m not complaining (the jokes were very funny in the film), parents be warned.

Acting- Johnny Depp is fantastic, and is surrounded by an equally great supporting cast.

Direction- Further proof that Gore Verbinski is one of the most talented action directors out there.

Writing- A great script, but a little to overstuffed with Western genre references.

Sound- Music is so-so, but the songs are pretty catchy and well composed.

Visuals- A beauty of a film; can’t believe this is the first animated film from Industrial Light and Magic. 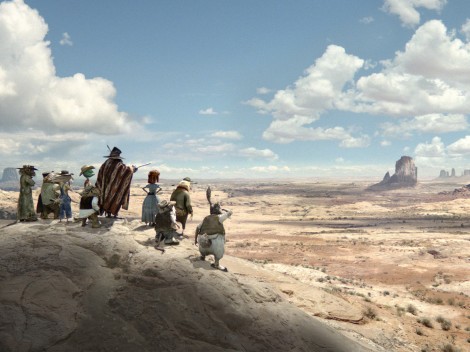