Things haven’t been the same for young Joe Lamb ever since his mother passed away in a tragic accident.  Left to be raised by his overworked and virtually uncaring father, town deputy Jackson Lamb, Joe has turned to his friend Charles’ zombie movie as a way to spend his time.  One night during filming, Joe and a group of his friends witness a horrific train crash, which leaves almost the entire station destroyed.  But as Joe soon finds out, that’s the least of the town’s problems.  Soon, an unknown entity is attacking and abducting locals, and Joe and his friends quickly find themselves caught in the middle of it all.

Hype, as a general principle, should not be believed.  Because believing in the hype, getting actively involved in and wrapped around in the pre-release buzz, can lead to many complications.  What point in the antico-sphere generated by viral videos and pointless mini games have you reached the place of no return?  A place where, upon seeing the film, you will yourself to love it just because you have invested so much time in the property?  You’ve solved all the riddles, you’ve played all the games, and you’ve spent hours upon hours connecting meaningless code to unlock a new poster.  Even if the movie ends up sucking, you’ve invested so much time into the universe of the film that you can’t force yourself to admit that it was, for all intents and purposes, a waste of time.  That’s the point of no return, the final destination of the train called Hype.

I say this all because, in my opinion, no one knows how to convince his audience to board the Hype Train more than J.J Abrams.  Lost, Cloverfield, Fringe, and Super 8 have all used the tactics of viral marketing to spin their audience into immersive new worlds.  Hell, Lost might have been the viral marketing revolution that kick-started the tactic used today.  We at TMP have been covering the viral marketing of Super 8 since its incarnation, from the secret film clips to the hidden images in the trailer.  By now, you probably think you know what kind of film Super 8 is.  But I think it’s important for you to know that all those months of viral marketing were for not.  Because you don’t know what Super 8 is.  Not by a long shot.

What caught me by surprise most was how utterly unimportant the monster movie aspects of the story are.  Don’t get me wrong; I loved all those scenes to death, and some of them remain the most memorable moments in the entire film.  However, in the grand scheme of things, Super 8 isn’t the story of an alien monster on the loose; it’s the story of a boy and his father getting over the loss of a loved one.  And yes, sometimes these two distinct plot lines feel completely independent from one another.  This is the aspect of the movie that is almost universally the crux of negative reviews; that the two plots are so different from each other, and the transitions in tone between them is so awkwardly jarring.  In my opinion, this isn’t the huge error most film pundits claim it is.  In fact, this element of the film is one of the reasons I loved it so much.

E.T wasn’t just a film about a boy and an alien.  Stand by Me isn’t just a movie about a bunch of kids looking for a body.  At the emotional center of those stories are kids dealing with horrible tragedy and how they get over or move on from their trauma.  For E.T, it was the divorce of his parents.  For Stand by Me, it was the loss of his brother.  In my opinion, the best adventure movies have children at the center of it all; when it comes down to it, children are much more innocent and entertaining characters to watch on screen.  Yet, the last 20 years have seen these type of children adventure movies disappear.  Hopefully, after Super 8, we’ll start to see a return to form.  Because boy oh boy, have I missed it.

I have to say, Abrams did a brilliant job casting this film.  The child actors are great, and probably deliver some of the best child acting I’ve seen in a film since The Sixth Sense. All the actors have a well defined role, and plenty of characteristics that make the actors fun to watch on screen.  I for one loved newcomer Joel Courtney as lead character Joe.  He plays the part with just the level of wonderment and underlying layer of tragedy that you WANT him to succeed.  And for the lead character, that’s already half the part right there.

In fact, I rooted for all the main characters in the film, which is a wonder if you think about it.  In most film’s, there’s always one child actor that just doesn’t have the skills and experience to pull the part off.  And for that, he’s either really jarring or completely annoying.  I didn’t feel that way about a single character in Super 8. I don’t know if its Abrams smart script or just the actor’s themselves, but they are all likable characters.  Once again, this is a miracle; for most of the kids in the cast, this is there first big role.  Abrams really found some winners for this one.

And quite honestly, the film itself can be perfectly encapsulated as a winner.  The visual effects are great, and there are some truly standout action scenes implementing them (the train crash sequence was probably my favorite action scene of the year).  And once again, Abrams shows how he can do so much with very little; I was amazed after the film to find out the budget was only $50 million!

But the true shining star of the film is Abrams direction.  Quite bluntly, he captures the heart and soul of a Spielberg film to a key.  Yet the combination of his style with the tones of Spielberg just, in my opinion, worked very well.  Super 8 could have easily been a ripoff, but Abrams adds just enough of his unique stylings to make the film unique.  I’ll admit, the quick changing of styles from Abrams to Spielberg did feel a bit jarring, and because the film has to have the monster moments AND the character moments, some of the more interesting sideplots get shafted to the side.  For instance, there’s a sideplot involving Joe and Charles that I found captivating, but is quickly forgotten about in wake of the monster attacks.  Easily the most disappointing part of the film.  But in a sea of sequels, comic book films, and bestselling novel adaptations, I appreciate a truly original film such as this.

Acting- All the roles fit the actors perfectly, and there character’s are all well defined and likable.

Direction- Abrams does a great job with the effects, and his signature lens flares are still a plenty.

Writing- J.J delivers another great screenplay chock full of some fantastic character moments, but parts of the monster movie subplot do seem to be a little half baked.

Sound- Great sound design; every little explosion and every whizzing bullet pack a punch.  The music is fantastic, and features a good blend of 70’s music.

Visuals- Phenomenal, especially considering the lower than normal budget for a film of this type.

Maybe from the beginning I was destined to love Super 8. Maybe I jumped on the Hype train before it even left the station, or maybe I’m just another crazy fanboy loving another film just because its “original.”  But one thing’s for sure; from the first shot on, I was dazzled by Super 8. I was held in suspense, laughing at the humor, and on board with the characters throughout.  And for a film like Super 8, that’s exactly what I was hoping for.  They don’t make ’em like they used to.  But hopefully, if more films like Super 8 ever grace the screen, they will start to once more.
Score: 9.5 out of 10
Tell us what you thought!  Be sure to rate and review Super 8 in our database. 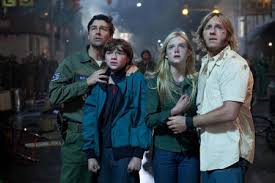 Loose Thoughts:
-Stay throughout the credits for something truly hilarious, charming, and guaranteed to put a smile on your face.
-Michael Giacchino invoking the classical work of John Williams.  Um…yes please!
-If anything, Super 8 isn’t a very subtle movie.  The last scene, while touching, was beating the audience over the head with the theme.  But with the music and the visuals on screen, I was invested in it anyways.
-As a film fan, Charles’ character made me laugh endlessly.  His constant need for “production value” was great.  And if you’re a filmmaker, you’ll certainly get nostalgia for the days when you were just like him.
-Didn’t get to mention it, but Kyle Chandler is a complete badass as Deputy Lamb.  Of course, what else would you expect from Coach Taylor?
-There’s a scene in a bus that, for some reason, gave me a Jurassic Park vibe.  Of course, the more Spielberg influence, the better.
-“DRUGS ARE BAD!!”