True Grit is the story of Mattie Ross (Hailee Steinfeld), a young girl who has to unpleasantly travel to a far away town to pick up her murdered fathers remains.  When she arrives at the town, she is horrified to find out that her father’s killer had not been caught, and that the law felt that capturing her father’s killer was of the lowest priority.  She then takes matters into her own hands, and hires washed up US Marshall Rooster Cogburn (Jeff Bridges) to track him down.

Directed by: Joel and Ethan Coen

Written by: Joel and Ethan Coen True Grit is the epitome of everything that the Coen Brothers have been working for in the past 10 years.  A cinematic tour de force, True Grit begins and ends with Mattie Ross, the young girl tasked with finding her fathers killer.  While it at first seems like the Coens are heading to a typical and heavily rehashed theme of revenge, the movie greatly surprised me in the simple fact that it DOESN’T.  Mattie Ross isn’t a character driven by simple and pure revenge; she’s a character driven by a sense of JUSTICE.  She wants retribution at any cost necessary, but not just because the man in question killed her father, but because she can’t believe that a man as evil as Tom Cheney (played by Josh Brolin in a small, but fairly good role) could just go walking the street wherever he wants.  She lives in a harsh environment and, while she is headstrong and certainly able to take care of herself, she does not succumb to the cruelty and brutality of the Old West.

One of the reasons that the character of Mattie is so defined is Hailee Steinfeld’s performance, which should more then garner her an Oscar nomination.  In fact, all three main actors (Steinfeld, Bridges, and Damon) deserve awards recognition, and is one of the reasons why the film is as good as it is.  Be it Steinfeld’s headstrong (and a little cocky) presentation of young Maddie Ross, or Jeff Bridges semi-campy yet tough-as-nails representation of Rooster Cogburn, the performances truly authenticate why Matt Damon and Jeff Bridges are at the top of their game, in addition to why Steinfeld is an actress to look out for.  This is a star making role, and I’m certainly excited to see more from this young, yet very talented, actress. Saying that the acting is the best part of this movie shouldn’t hinder the Coen’s direction; in fact, the direction is nearly flawless.  The imagery is crisp and clean, and is beautiful to no end.  I could watch Jeff Bridges riding along the flatlands of the West for hours and never get bored.  Most of this can be attributed to cinematographer Roger Deakins, a frequent Coen collaborator who has more then proven his salt with films such as No Country for Old Men, The Big Lebowski, and The Shawshank Redemption.  With True Grit, Deakins has designed one hell of a beautiful film.

The music by Carter Burwell is also very good, despite the fact that it borrows a lot from other classic Western scores (one of the reasons why it was disqualified for an Oscar).  The writing is typical Coen Brothers, and features the Coens typical brand of off kilter humor. The film is actually quite entertaining, and has some moments of comedic perfection.  For instance, the conversation between Hailee Steinfeld and the jerky shopkeeper has a hilarious outcome, and further exemplifies how good an actress Steinfeld is.  The first hour of the film is very talky, and not one to see when tired.  However, the dialogue is interesting enough to be both entertaining and informative.

Not much to complain about here.  The pacing is a little off though, especially the ending.  Well I won’t get into spoilers here, the film felt that it was leading up to something big and important, but it was actually pretty anti-climatic, which is another Coen Brothers thing (No Country for Old Men, I’m calling you out), but still.  I didn’t expect a badass action scene with multiple Jeff Bridges fighting multiple Agent Smiths, but I did expect a little more tension then what we ultimately got.  However, the one scene with Little Blackie was heart wrenching…but that’s all I’m going to say about the matter.

Another minor gripe I had with the film was the sound.  The score was great, but I sometimes found it hard to understand what the characters were saying.  I don’t know if it was the Western accents that made it hard to understand, or some weird sound design thing, but this was one of those films that I said “Man, I really wish I had subtitles right now.”  I guess that’s what Blu Ray is for, I assume.  However, these are very minor gripes, and they subtract very little from the film.

Acting- Some of the best acting of the year, all the main performances are Oscar-worthy, at the very least.  Hailee Steinfeld, in particular, is one to look out for.

Direction- The Coen Brother’s have an eye for directing; Nuff said.

Writing- A Coen Brother’s script, through and through.  Dark humor and scenes of intense dialogue make the trip worth while.

Sound- Music is a great combination of new and old, but the dialogue can be hard to hear sometimes.

Visuals- Beautiful doesn’t begin to describe it.  The Old West through the eyes of Roger Deakins is truly a sight to behold.

True Grit is propelled by the fantastic performances, but that should be no insult to the style and writing of the Coen Brothers.  Well it’s not their best film ever made, it certainly stands at the upper echelon of their filmography, and one worth the heaps of admiration it has attained. 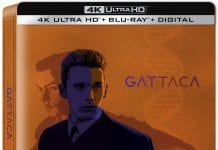