TRON: Legacy was obviously made by people who were enamored with the original TRON. The problem there is that the original TRON is not a good film. Was it visually stunning? Sure. Did it have a profound effect on the next generation of science fiction films? Inarguably. But was it a well-paced, well-written, well-put-together piece of cinema? Nuh uh. I know, I know. Lambast me all you want, but you go back and watch that movie today and tell me if it’s as good as you remember it. Spoilers: it’s not.

Many of the same attributes that endeared the original film to the hearts of an entire generation return for TRON: Legacy. The film is a visual feast. The stark contrasting colors and retro/modern design paints an incredible picture. Violent orange and electric blue cycles and aircrafts float and fly down neon highways and airways perfectly capturing the way ‘80s films visualized computer tech. Characters walk around as blackened silhouettes, allowing their glowing, illuminated costumes to radiate onscreen. If you’re a fan of ‘80s visual style, TRON: Legacy is absolutely breathtaking.

The Daft Punk-composed soundtrack lends an incredible blend of modern and ‘80s electronica to the film that does an a great job of taking the audience back to the ‘80s while remaining modern and relevant. The soundtrack deftly pulses and undulates throughout the movie and almost does enough to fix TRON: Legacy’s pacing issues. Almost. 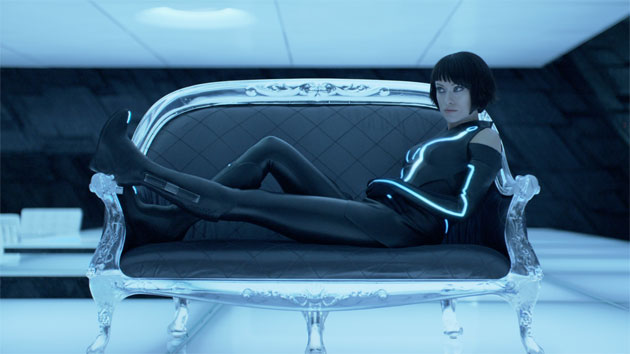 It’s in this area where homage to ‘80s cinema becomes a vice instead of a virtue. Much like its inspiration, TRON: Legacy abruptly shifts from painstakingly tedious exposition to inexplicably directionless action constantly. There’s a light-cycle scene in the movie because, well, it’s a TRON movie and there’s supposed to be a light-cycle scene. People throw neon discs at one another because that’s what they’re supposed to do, right? There’s little to no purpose for any of it and the writers’ hackneyed explanations do nothing to provide context.

For a film packed with as many long, dialogue-heavy exposition scenes as TRON: Legacy, there really isn’t much story here at all. And I use the word “dialogue” in the loosest sense. The writing is the kind of bad that would make George Lucas proud.

Garrett Hedlund, the actor playing the lead character, does nothing to alleviate any of these problems. His portrayal of Sam Flynn, the son of Jeff Bridges’ Kevin Flynn, is wooden, stilted, and lifeless. His attempts at giving the character an edge by “packing a ‘tude” feel like the product of focus testing from a 1994 Saturday morning cartoon. Jeff Bridges does an admirable job with the material he’s given, but these are the advantages of hiring an Academy Award winning actor.

If you get all misty eyed when watching an A-ha music video, listening to the Blade Runner soundtrack, or seeing a working Galaga machine then there are things you’ll really like about TRON: Legacy. Its soundtrack and visuals scratch that ‘80s itch you’ve been feeling (and couldn’t find any cream for). Unfortunately, the other elements detract in a big way. This is a rare case where the movie is less than the sum of its parts.