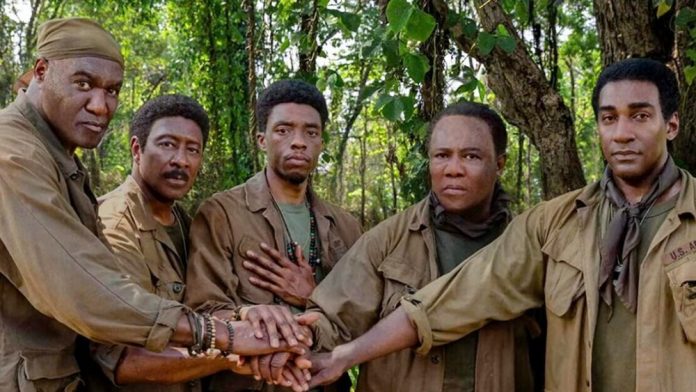 The Academy Awards may be the most prestigious movie awards out there, but that doesn’t mean they always make the best decisions. Join us as we look at which potential nominees got left out and which nominees don’t belong.

The nominees for the 2021 Academy Awards were announced on March 15th, and the ceremony will take place on April 25th. We’ll have to wait until then to see who wins, but based on the potential nominees that were left out we DO know who WON’T be winning. After having a few days to think it over, here are our thoughts on the biggest mistakes that the Academy voters made this year. Garrett – Despite landing on many critics’ lists as one of the best films of the year, Spike Lee’s Da 5 Bloods only managed one Oscar nomination – for best score. The biggest snub of all seems to be Delroy Lindo’s scene-stealing turn as Paul. Lindo is a veteran actor and this captivating role seemed to signal that his time was here for recognition by the Academy. Unfortunately, I think the film released too early in the year for the performance to leave a lasting impression. Even though it may deserve a nomination for Best Actor, the voters must have just forgotten about it. A shame!

Jordan – I’m still in shock that Da 5 Bloods has been shut out of most awards shows this year, but NOTHING had bugged me more than seeing Delroy Lindo being so completely overlooked. To be entirely honest, I don’t have many gripes when it comes to the Oscar noms this year, but the absolutely glaring snub is Lindo.

There’s no denying the whole cast of the film did amazing work on the film, but even so Lindo managed to stand out and steal every scene he was a part of. He was an emotional crux of the film, even as he did stuff you couldn’t quite agree with. It’s truly hard to imagine this film without his presence.

Jordan – I’m Thinking of Ending Things is a film I wanted to love much more than I did. Its lofty ideas and heady concepts had potential I never quite felt like it reached. That said, the absolute best part of the movie was Jessie Buckley’s performance. Equal parts humorous, touching, and philosophical, she carried the weight of the film on her shoulders.

Buckley’s character in the film is actually a conglomeration of women, all those Jake (Jesse Plemons) had dated throughout his life. As such, her name and backstory are constantly changing throughout the film. Hell, there are scenes in which she’d begin talking about one backstory and swap to another one all within the same scene/piece of dialog. Buckley managed this effortlessly while still bringing a distinct sense of charm to the role that kept you watching even as the film meandered. Shutting out the film entirely (even on the technical side of things) is bad enough, but overlooking Jessie Buckley is almost criminal. Garrett – Nolan’s films generally get some kind of recognition for their cinematography – not always an Oscar nomination, but at least some sort of accolade from another awards circuit. This is Nolan’s second collaboration with cinematographer Hoyte van Hoytema, and their last film (Dunkirk) did get nominated for an Academy Award for best cinematographer. Tenet’s cinematography is really quite astounding, considering that so much of the film is backwards. You would think that would merit some sort of technical achievement. At least the film didn’t get nominated for its sound, something it did NOT do well.

Garrett – Carrying on my thoughts on the cinematography of Tenet, you would also think that an action blockbuster which bends time would also be a front runner for the best film editing Oscar. Big action movies usually get nominated for this award, and I think Tenet belonged there because the film literally will not work if it is poorly edited.

Jordan – While I have my issues with Tenet generally speaking, it’s impossible to say it’s not expertly put together. As someone who studied film editing in college, simply thinking about the basics of cutting this type of story together sends my mind reeling. It’s a stunning technical achievement, but the way the editing is essential to the story being told should have put this into Oscar consideration.

Regina King – Best Director for One Night in Miami

Garrett – Many people thought that Regina King would see an Oscar nomination for her feature debut as a director. Her work in this film is really interesting. She elevates the source material from the stage and makes it flow like a real film, much better in my opinion than Ma Rainey’s Black Bottom. But not only did she give the story a new life on screen, she made many interesting and important decisions to emphasize the script and the themes. I haven’t seen Another Round, so I can’t comment on whether Thomas Vintberg deserves his nomination over King, but One Night in Miami is an important film for this moment in time, and the direction is one of the things about it that stands out the most. Garrett – So maybe The Invisible Man isn’t the type of film that would usually get recognized by the Academy no matter how much it resonates with its target audience. But in a year when CGI-fueled blockbusters were very very thin, I would have thought that more moderately budgeted pictures would be included. This one has a plot that revolves around some pretty sophisticated special effects, and the film pulls them off brilliantly. I know this one was a long-shot, but I think one of the most-enjoyed films of the year deserved at least something.

Becky- While I had a feeling that Birds of Prey wouldn’t receive any nominations in the “big categories” (even though Margot Robbie totally deserves a nomination for Best Actress in this role), I thought that if nothing else the film would get recognized for its outstanding costume design by the Academy Awards. But, nope, nothing, not a bloody mention. And that’s a shame because have you SEEN the outfit Harley wears in the “Diamonds are a Girls Best Friend” sequence? It’s such a clever update on the design that it immediately became my favorite scene in the film. And that’s not including all of the other amazing costumes Margot wears throughout the film that are so pointedly “Harley Quinn” in look and aesthetic that it’s hard to put into words. Plus I have to mention the awesome costumes created for Black Mask. I can’t understand why the Oscars would completely snub this film, but, very little has made sense in the last year so I really shouldn’t be surprised. Garrett – This one is puzzling. I’m glad Stanfield was nominated, I think he deserved recognition for his work in this film. But he was clearly the main character so I don’t know why they considered his work as supporting actor. The only redeeming part of this is that if the Academy had considered him as a lead actor in this film he probably wouldn’t have gotten a nomination because that field is very full this year.

Jordan – Gotta say, the acting nominations for Judas and the Black Messiah are easily the biggest headscratcher this year. I’m very excited to see both Lakeith Stanfield and Daniel Kaluuya get nominations because they both absolutely deserve it. It’s so strange that they were BOTH nominated in the same Supporting Actor category!

I get there are plenty of ensemble films out there where there really isn’t one single main character, but Judas and the Black Messiah certainly isn’t one of those. The case could be made for EITHER of these actors to be the lead in the film, but considering the whole film centers on Stanfield’s character/actions (even recreating newscasts based on the real person), there’s no reason he couldn’t have been in the Lead Actor category.

Garrett – Of all the films they could have honored with a nomination for “Best Sound” (separate awards for Best Sound Mixing, and Best Sound Editing are no longer a thing), they pick Greyhound? Not that Greyhound was bad, or had sound that wasn’t worthy of recognition, but it seems like there were better choices left off the table. Greyhound is certainly big and loud, but it is the odd film out in a category that features such 2020 notables which revolved heavily around their sound design such as Sound of Metal and Soul. Movies like Borat Subsequent Moviefilm which required a daftness to capture improvised sound accurately, Ma Rainey’s Black Bottom which mixed music and fiery dialogue, Judas and the Black Messiah which had captivating crowd scenes, and Mulan which had large sets which required a lot of coordination seem like more obvious choices. Garrett – While I thoroughly enjoyed Borat Subsequent Moviefilm and appreciated the way the writers weaved the film’s plot around the improvisation, that’s the problem with this nomination.This was a film where its best moments were improvised. That means not written down on a script ahead of time. Certainly they put some effort and planning on coming up with Borat’s schemes to try and get a certain reaction, but some of the film’s writing must have also been reactionary. It seems to me like there could have been some more worthy candidates for this nomination.

Garrett – All of the other nominations in this category had a production design which really stood out. They were films where you could be shown a still and would instantly know what film that still belonged to. But in my opinion the production design for The Father did not stand out as much as in those other films, or in several other worthy films which did not get nomination. The ones which come to mind include Emma, Mulan, Judas and the Black Messiah, and One Night in Miami. Garrett – It was a big shame that Da 5 Bloods only received one nomination. I’ve outlined a few areas here where I thought it deserved recognition. At the very least it could have gotten a Best Picture nomination, along with Ma Rainey’s Black Bottom, and One Night in Miami. I have no problems with the films that were nominated for this award, but there can be a total of up to 10. It seems like every year there is at least one or two films which seems to deserve this nomination as much as the other films, but for some reason gets left off. This year it is especially puzzling regarding these three films in particular because they are all from black filmmakers. I thought the Academy was going to make an effort to better recognize minority filmmakers after the debacle of 2018? This year we did get more diversity than we have before, but what’s the harm in honoring two more films with a nomination? Especially when they have very important messages that are as timely as anything else nominated this year, and feature diverse casts and are helmed by minority filmmakers?