Spring Breakers is a film that has been misunderstood, pre-evaluated, underestimated, and misled. That’s likely an effect of cunning marketing, but it’s also the audience’s inability to recognize a film’s objectivity in the face of breasts, butts, and extreme hedonism. Or on the other hand – for the audience promised the party – the films subjectivity plays it’s part, and they feel uncomfortable and guilty without really understanding why. Certainly user ratings indicate a majority distaste (frozen at a 42% user tomato rating), and critics only slightly more favorable (at 65%).. But in 2013, a year that included The Great Beauty, Inside Llewyn Davis, Blue Is The Warmest Color, 12 Years A Slave, American Hustle, Gravity, All Is Lost, and plenty other great titles, Spring Breakers easily held it’s own and remains fond in the memory of those who defend it to the end. To my splendor I found it featured among several critics top ten lists for the year 2013 (often hovering around the top 5’s). Not to say, join the cult, but just to illustrate that Spring Breakers has no interest in being the misogynstic party movie that most have written it off as, or indeed, ventured to the theaters for.

It has every interest in exploring that debauchery though, meaning depravity comes with the territory. So if you can’t take the imagery (which by the way is another of Benoît Debie’s beautifully rendered neon underworlds), don’t see it. But also don’t go seeking refuge by spiting the film on the interwebs. The biggest mistake one can make watching the film, is thinking the film condones the behaviors that it displays deliberately ad nauseam. Yes, much of the behavior portrayed on screen is misogynistic, but that does not mean the film inherits that trait simply by showing the action. The issue is, Spring Breakers never voices a direct opposition, at least vocally, so the audience assumes the characters speak for the film. The opinions verbally expressed seem all in favor of the behaviors, but those stem from the perspectives of various reliable/unreliable characters and don’t necessarily demonstrate the film’s attitude.

The same issue can be seen in the reaction to American Sniper. Raging Liberals labeled it chauvinistic propaganda, and Crazy Conservative types found it inspirational and energizing. Neither are necessarily correct. Do you really think Clint Eastwood, who directed a WWII saga emphasizing the similarities between the two opposing forces (Flags Of Our Fathers: Americans, Letters From Iwo Jima: Japanese) has any interest in crafting US propaganda? And, do you really think filmmaker Harmony Korine, who cut his teeth on experimental features like Gummo, Trash Humpers, and Julien-Donkey-Boy, has any sort of vying interest in making the next Project-X? When a soldier gets excited and congratulates another on a confirmed kill in American Sniper, that does not mean the film itself celebrates in tandem. When the final sniper showdown commences, and Eastwood decides to show the Syrian ‘Enemy’ Sniper with his wife and child beforehand (just as we’ve seen our American Sniper do on several occasions)… Then, you can draw conclusions from that juxtaposition. But American Sniper is conceivably too hush hush, even in it’s own attitude, (perhaps due to the rather sensitive timing of Chris Kyle’s death, and his fathers threats on the film) and loses a lot in perspective by playing it too safe behind the camera.

Spring Breakers has much more of a definable perspective and underlying narrative going on formally though. It begins with the four female leads. Selena Gomez as the church girl Faith, Harmony’s wife Rachel as Cotty, and Vanessa Hudgens and Ashley Benson as Candy and Brit. Together they represent four levels. Selena Gomez is the most conservative, Rachel is the intermediate between the two, and Hudgens and Benson are the vapid sociopaths. This is established through action, composition, and image. When the girls decide to rob a place to make enough money for their Spring Break trip, consider each of their positions. Faith is unaware, sleeping at home. Rachel the intermediate is the get away driver, and Hudgens and Benson are the two carrying out the robbery.

Hudgens and Benson are always inhabiting the same space, whereas Rachel and Gomez’s character are always shown separately from the pack. Even when they do mingle all together they’re composed in a way that is consistent with these divisions. Also note the order in which the girls leave the dreamland (Florida) behind. Gomez leaves first, then Rachel, and then Franco (via death), but Hudgens and Benson live on to permeate the fever dream.

Franco a revelation as “Alien” provides the only beating heart in the film. Not much is elaborated on vocally once again, but the clues are all there. What is told, is that he grew up being the only white kid in a rough black neighborhood. Hence he becomes the apex of that experience. He turns the ‘alienation’ that caused him trauma in his youth. into a proud facade. You get the sense that the nickname ‘Alien’ could have easily been a bully’s play on his real name Allen, a nickname he now wears with pride. But beneath the veil of pop culture, guns, drugs, and money, Alien reveals himself to be incredibly vulnerable and afraid (His face even cuts on the sad countenance of a puppy).

He claims he always wanted to be bad, but it comes off more as a necessity than a nature. Alien finds safety in the lyrics and lifestyles of pop and hip hop but the realities often prove too grueling. When Franco serenades the girls with Britney Spears’s (Queen/God of pop) ‘Everytime’ before going out for a night of violence and theft, it’s not unlike the prayers Faith does in the company of her church group.

And finally when Franco, Hudgens, and Benson square off against Archie’s (Gucci Mane’s) crew, Franco dies within the first encounter. Candy and Brit then take on a whole squadron of armed men, and proceed to kill Archie whose pictured, not unlike Franco, in the company of two other women. It all plays quite unlikely, and some may come into issue with the authenticity of the scene. But instead of denouncing the scene for it’s lack of realism, consider why it plays as so. Consider the song title “Scary Monsters”, and consider it’s portrayal of these two characters so far. They are the ultimately depraved, interested only in wealth, fun, violence, and adrenaline. They’re symbols, and those who died, human. Alien is vulnerable, Archie is vulnerable, often they’re depicted as doubles. So then, it does not demonize the gangsters living at the core of the debauchery. The film instead understands it as a necessary safe haven for the desperate and afraid. At the end of the scene the camera lingers on the faces of the deceased, the gangsters have been separated from the evil (Hudgens and Benson).

It’s interested in why people seek this hedonism and romanticize it as dreamscape; it’s suggestions are always existential. Faith thinks of it as a spiritual getaway, Candy and Brit thrive in it, and for Alien it’s all he knows. Harmony’s a visual story teller and has a visual mind by design. If you hope to get a sense of his impressions, and his attitudes, you’ll have to look for it within the images and the form.

However, I’m glad that this film infuriated people. How awesome that a Harmony Korine film snuck into the mainstream and came off as a big f— you to the audiences expecting some traditional degeneracy. Friends of mine who fit the bil saw the film and had a genuine emotional response. “It was alright, it was… weird” they’d say while appearing vulnerable and pausing to articulate, kicking and pointing their eyes to the ground. The audience I saw it with was similarly dreary afterwards and an uncomfortable quiet filled the space as the credits rolled.

I suppose it’s irrational to hope a general audience enjoys a film like Spring Breakers. But even the critics and film journalists have began to fail us, being unable to peer objectively and understand ‘incoherence’ and ‘repetition’ as neutral descriptions. Often they’ll throw these types of labels into their reviews as if the description by itself suggests a failure. These things can work to the detriment of the film of course, but that always depends on the execution and the circumstance (as is the same with any other filmmaking component). In my review of Inherent Vice, I use the cheap pun Incoherent Vice, but it’s not in a way that belittles the film. I gave it a perfect score. I suppose it’s natural to resist films that aren’t linear, but it’s a resistance everyone should overcome. When things like incoherence and abstraction become not frustrating, but simply neutral ingredients to story telling and mood, it opens up new opportunities for discovery and pleasures where they didn’t exist before.

It also helps understand the intention of films like American Sniper. Watch what precedes Chris Kyle’s new-found determination to join the army, his girlfriend breaks up with him. He’s emasculated, told that he’s not man enough. We cut ahead in time, Chris Kyle see’s 9/11 Footage and knows he must join the military. What’s the film saying? Why include the break up to a relationship that’s never presented to us in the first place? Is it saying Kyle joins the military out of a selfish need to ‘prove’ himself as a man? The film neither villainizes him, nor paints him a hero. Although the films last third isn’t totally authentic to the man Chris Kyle was known to be at that point in his life, Eastwood and Cooper are primarily concerned with presenting a multi-faceted human being here.

It’s perfectly fine that, for most people, film is purely a form of escapism. They grade it on comfortability and pleasure, and that’ll work for the films specifically catering to that need. But then, do not disrespect the films with interests residing on the opposite end of the spectrum. And if you do happen upon one that sets you off, ask yourself why you have reacted so strongly in distaste. I believe it’s good practice to come to terms with a discomfort you discover to be unjustified. 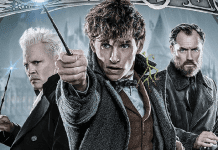 Why There are So Few Standout Traditional Fantasy Films These Days