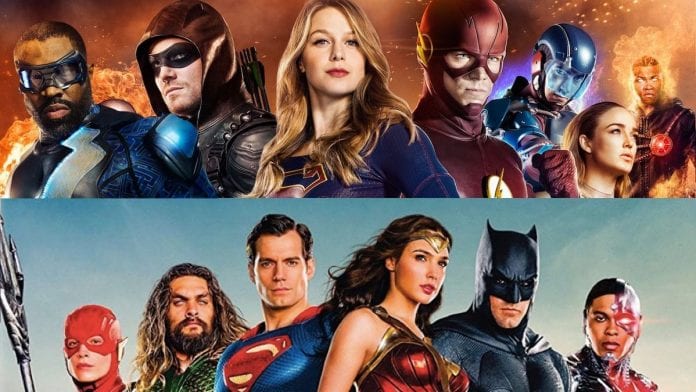 This month we’re looking at contemporary trends in social media which have damaged the perception of film as both a form of art and entertainment media. This week, we examine how the improvement of TV/streaming shows has hurt the image of the traditional feature film format.

A few years ago, they said we were living in the golden age of television. With hit shows such as The Walking Dead, Mad Men, Breaking Bad, and later Game of Thrones, Watchmen, and Westworld, it is increasingly difficult to tell the difference between movies and TV/streaming shows just by looks alone. Not only do these hit shows attract the type of A-list talent we are used to seeing on the big screen, but audiences have come to expect big production values and high technical competence. In the last 15-20 years, the face of episodic live-action entertainment has changed significantly.

Traditional theatrical releases have not made as much of a stride in the same time period. Every few years we get another Spider-Man reboot. Someone screws up Star Wars. We see little progress in the areas of gender or racial equality both in front of and behind the camera. Theaters are getting more and more jam-packed with sequels of successful tent pole franchises, pushing out the opportunities for those smaller or mid-budget original flicks. The realm of cinema is more commercial than it has been ever before. So when it comes time to compare the state of TV/streaming with that of cinema, there is no surprise that cinema seems to be on the decline. COVID-19 could only have possibly accelerated this trend. With the successful home releases of new feature films, studios are reconsidering the theatrical release altogether. Releasing directly to home video has its cost-saving advantages, but it is also just one step away from how most of us consume our episodic entertainment these days. Factor in the high costs for movie tickets, concessions, and the safety questions still associated with returning to theaters – staying at home suddenly seems much more appealing than it had in the past.

But while the pandemic has brought many more people into the fold of streaming home entertainment than ever before, the trend away from theaters had actually already been underway. While box office records are still being broken, younger audiences just haven’t shown the same type of enthusiasm towards film as previous generations had when they were coming of age. But don’t just blame it on shorter attention spans and easier access to other types of entertainment. Young people are losing interest in film because they see it as an old-fashioned method.

Compared to modern miniseries and other serialized shows, feature films lack the type of engagement which can come from the experience of binge watching. While modern franchises have done their best to keep releasing films on a regular basis to capitalize on their popularity, most of the time you still have to wait years for the next installment. That is long term commitment. Compare with shows where you can watch complete seasons over the course of a day to a few weeks, depending on how fast you go. If you want to see how a story ends, you can just keep watching. As long as there are still episodes to watch, the responsibility to continue the story is on you, the viewer, rather than on the production studios to make more movies. Adding up the run time of a whole season’s worth of episodes will dwarf the runtime of a single feature film. That’s more time to set up characters, investigate interesting side stories, and tell a story in greater detail. It’s part of the reason why we have seen the trend of feature film run times growing longer and longer. The stories audiences want to see these days aren’t as simple as they once could be. Likewise, with an episodic format, you don’t have to block out 3 hours of your time all at once to see a story through the end. You can watch it at your own convenience. In our busy lives, you can fit in your streaming time between classes or work, and it is available on your phone or tablet anywhere you are. The theater doesn’t allow for this flexibility.

Cost is another factor, although I have already mentioned it above. The cost to go to the theater – tickets but also transportation, babysitters, food, etc…can be prohibitive to many people. For most of us, we can stream our favorite shows and miniseries for free, or at least a much lower cost than it would be to go to the theater. So, from the perspective of many people, the theater offers a product which is not only more expensive, inconvenient, and old-fashioned in format, it is no longer any better in quality compared to the material they can already access, and it doesn’t offer as much depth (which could be entertainment value) as TV/streaming services can. It’s difficult to argue with those points. But I believe there is still critical merit in the feature film format which TV/streaming shows will never be able to accomplish. And the sad truth is this merit is being overlooked more and more as the streaming trend has risen.

Let’s start with the big picture, and work our way down to the small details. The importance of film starts with its long and storied history. Television has been around about half as long, and the more recent high-production series are all just babies compared to what film has already accomplished. Look back at the history of television, and while it has influenced pop culture, we don’t talk about the best television shows from history in the same way we talk about the best films in history. Film has had a significant impact on the development of pop culture, against which television/streaming has only recently been able to encroach upon. Throwing away all of what film has taught us and the experiences it has given us over its century-long history would be a big mistake. It’s like dismissing the automobile because electric scooters are more cost effective and convenient. Cheaper and more accessible doesn’t always mean better, especially when you realize all that has gone into the development of film to get it to the point where it is today. There is no quibble against the quality of streaming/TV shows these days. In that department, production studios have invested heavily to bring film-like production values to your favorite shows and miniseries. However, film still offers better consistency in terms of production value, storytelling, and creative vision. Especially in comparison with syndicated (non-serialized) shows which have different writers and directors for each episode, film is the better medium for continuity. Even in comparison with syndicated media, film has the advantage of a single script telling one story, and (most of the time) a single director bringing that story to life. Contrast that with the serialized shows which have disappointed from season to season or seen a reduction in quality over time as original ideas run their course and the show runners struggle to find comparable inspiration. The number of TV/streaming shows and miniseries which are good all the way through is few.

With a shorter cumulative runtime, films have the advantage of less opportunity to screw things up. Furthermore, they are governed by a cohesive vision from the start. This allows for the influences of auteur creators, something which is very rare in the world of TV/streaming shows. If a creative director is involved with a TV/streaming show, it is typically more of a collaborative effort than it would be in film. Without the opportunities for singular individuals to have a significant impact on the end product, TV/streaming shows become more business oriented than artistically driven. They aren’t just an idea for a story brought to life, they are many people’s ideas for telling many different stories focused around the same characters. Film has the ability to be more expressive in presentation, which allows for a more complete viewing experience.

Although the format of TV/streaming shows does allow for more in-depth and therefore creative storytelling, feature films are generally the place where we see the most innovation in terms of production or storytelling. With many episodes, specific details in the stories of TV/streaming shows tend to get lost in the big picture audiences take away from their viewing experience. There is a lot to keep track of, and so what happens in Episode 1 may not be able to be recalled in detail while viewing Episode 21. There is a reason so many shows start with a recap of the most important moments of past episodes as they pertain to the newest episode. This issue doesn’t happen to the same degree in film. There may be loss of fidelity as sequels progress, but specific moments are going to be better remembered in film as compared to TV/streaming shows. Finally, film allows for a more inclusive opportunity for creators than TV/streaming is. In particular I am talking about how indie films offer a better opportunity for creators to get recognition for their talents as opposed to more “indie” TV/streaming shows. While there are a wide range of varied perspectives and talents on display, TV/streaming shows are most viewed on specific corporate-owned platforms. Most of those shows are planned for and produced by the production studio or company that owns the platform. This doesn’t allow for much opportunity for outsiders. Through film festivals, more diverse theaters, and yes, even streaming services, indie films are more accessible than ever before. Their merits are many, but most important is their ability to tell the types of stories in ways which are just not feasible (or conceived of) through traditional production studios. Indie (and really feature film in general) showcase the media of live-action recorded entertainment as a form of art and expression, more than the TV/streaming shows are able to.

So, in conclusion we can see that there are many advantages of both types of media, it shouldn’t really be a competition between the two. Traditional feature film tells stories in a way that allows for more creative cohesion and artistic accomplishment than is possible in TV/streaming. However, the method of delivery of traditional feature film is under stress thanks to the development of in-home technology and the faster pace at which life occurs in our modern world.

For these reasons, it is not surprising that we have seen a move towards a blend of the two styles. People have reacted very positively towards the opportunities to binge watch and get the most out of a specific set of characters and the universe they exist in. Film has followed suit with mega-franchises offering many installments and spinoffs to echo this type of immersive entertainment. The real outrage should be how these developments are threatening the cultural aspects and creative avenues which made film so popular in the first place. You can still love both TV/streaming and feature film for what they are and the type of entertainment you get out of them. But in both cases be aware of how the move towards “easier entertainment” doesn’t always equal “better entertainment”.

For more on what “better entertainment” means, check out these essays:

How Film Analysis Can Add to the Enjoyment of Watching Film

How Personal Bias Leads to Bad Film Reviews, Not Great Ones

The Top Ten Movie Soundtracks from the 1980’s