Over the past 30 years, Tom Cruise has remained one of the biggest stars in Hollywood. Today he is best known as an edgy action movie star, but he made a career out of intense dramatic performances as well. Movies such as the Mission: Impossible franchise, Top Gun, Minority Report, War of the Worlds, Edge of Tomorrow, and the Jack Reacher films highlight his action movie resume. His best loved dramatic roles were featured in films such as Born on the Fourth of July, A Few Good Men, Rain Man, Magnolia, Eyes Wide Shut, The Last Samurai, and Jerry Maguire. Cruise has been nominated for three Oscars, two for Best Actor in a leading role, and one for Best Actor in a supporting role. He is a seven-time Golden Globe nominee, three-time winner. In 2012 he was the highest paid actor in the world, and the combined box office proceeds from all of his films make him the eighth highest grossing actor of all time.

Despite all of this success, Tom Cruise remains perhaps the most polarizing figure in Hollywood. On screen he is beloved for his perfectionist dedication to making entertaining films. Cruise is an adrenaline junky, and he enjoys doing most of the stunts in his own films, including those that are incredibly dangerous. This is all but unheard of with such a bankable star. However, Tom Cruise has made a name for himself due to his persona off screen as much as his onscreen persona, and not always in a positive light. The star’s involvement with the church of Scientology has been a source of controversy, as has his voicing of unpopular personal views. His love life has seemingly been a topic of interest in the tabloids from the day he became a star, and the infamous couch jumping incident on Oprah’s talk show is not something we will soon forget. Suffice to say, Tom Cruise is not your typical Hollywood movie star, which is what makes him so fascinating.

Of course, Cruise’s success didn’t happen over night. It was the result of a lot of hard work, determination, and some good fortune. This is the story of how he got his start in the film industry and how the 1986 film Top Gun made him a star.

Thomas Cruise Mapother IV was born in Syracuse, NY in 1962. His father was an electrical engineer and his mother a special education teacher. During his childhood, Cruise and his sisters were raised in poverty conditions. The family frequently moved to find work, and by the time Cruise was 14 years old he had attended 15 different schools. By always being the new kid, Cruise was bullied as a kid and had to learn to fend for himself. The difficulty of his childhood was only compounded by his physically and emotionally abusive father.

In 1971, the family moved to Canada when Cruise’s father was offered a position with the Canadian Armed Forces. When Tom was 12 years old, his father walked out on the family, and he returned to the US with his mother and sisters. To assist the family’s dire financial situation, Tom and his sisters worked odd jobs to try and raise money. Cruise was raised catholic, and due to his family situation considered becoming a priest. He attended seminary school on a church scholarship at the age of 14, however an continued interest in drama changed his mind. In elementary school he had acted in a few plays, and the experience stuck with him. Later, in high school he was on the wrestling team, but a knee injury motivated him to look for other activities and brought him back to acting.

Cruise gave himself 10 years to try and make a career out of acting, but his sense of self confidence and focus made it possible in much less time. He left highschool early to pursue a career in acting, moving to New York City at the age of 19 to try and find work. Cruise even missed his own high school graduation because he was busy performing in a play. Initially he performed poorly at auditions, but kept at it and got better. His first success was a bit role in the 1981 movie, Endless Love. The same year he also secured a small role in Taps. 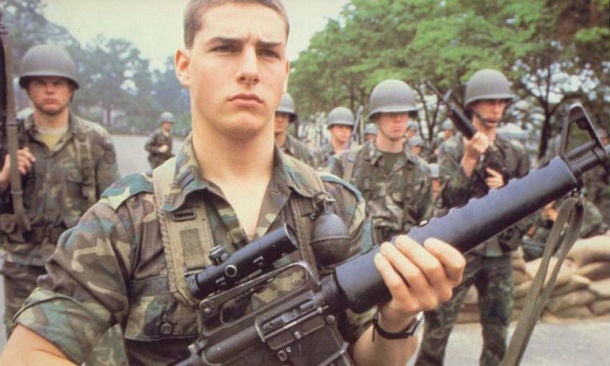 Taps was the film that really helped to open doors for Tom. Director Harold Becker saw Cruise’s onscreen appeal and expanded his role in the film. When Taps was released, Cruise earned praise from other filmmakers and producers. This helped him to be cast as part of an ensemble in Francis Ford Coppola’s The Outsiders in 1983. Here he starred alongside other up-and-coming actors such as Emilio Estevez, Rob Lowe, and Matt Dillon – actors who would become part of the “Brat Pack”. The rising status of these actors also provided Cruise with a fair amount of attention, and he began getting bigger and bigger roles. That same year he had a larger role in the teen comedy Losing It.

Tom Cruise earned a starring role in the 1983 film Risky Business, and made the most of it. He beat out Tom Hanks, Michael J. Fox, Nicholas Cage, and John Cusack among others for the role. The film’s risque satirical comedy, and a famous (improvised) scene with Cruise dancing in his underwear, made people take notice. The film became a hit at the box office, the first of many in Cruise’s career. Critics and audiences loved the film, praising the witty dialogue and insightful direction.

But despite the success of Risky Business, Cruise was still the new kid on the block. To cement his status as a movie star, he had to have another hit to prove that he belonged. He starred in two other films after Risky Business, but Cruise didn’t exactly gain a lot of attention for his work. Both All the Right Moves and Legend weren’t well received in theaters and were derided by critics. However, Cruises’ work with director Ridley Scott in Legend opened up the opportunity to work with Scott’s brother Tony in his new film Top Gun.

Jerry Bruckheimer was producer for Top Gun and he had a difficult time finding someone to be the lead because of the film’s subject matter and physically demanding shooting. Tom Cruise was one of their first choices, but he had turned down the offer. Many other big name actors actually turned down the opportunity to work in the film as well because they thought it would flop. Val Kilmer, the lead supporting actor, also didn’t want to do the movie, but the studio made him do it anyway because of his contract. To try and convince Cruise, Bruckheimer scheduled a ride-along in a Navy fighter jet for Cruise. Despite vomiting, Cruise was so enthralled by the experience that he agreed to do the movie right away as soon as the pilot landed.

Cruise’s decision paid off, as Top Gun became a smash hit in theaters, ultimately becoming the highest grossing movie released in theaters in 1986. Critics praised Cruise for his performance, and the film’s success opened up many more acting opportunities for the young actor to explore moving forward.