Synopsis: After his father’s death, millionaire slacker Britt Reid (Seth Rogen) teams up with his late father’s assistant, Kato (Jay Chou) to fight crime in his slowing decaying city as The Green Hornet.

Written by: Seth Rogen and Evan Goldberg (Based on the Radio Series by George W. Trendle)

Mixed at best.  Clocking in at a pretty sad 44%, The Green Hornet isn’t exactly meshing with critics.  One of the most scathing review came from Roger Ebert, who gave the film an abysmal one out of four.  “The Green Hornet” is an almost unendurable demonstration of a movie with nothing to be about,” said Ebert.  Other critics were just as harsh, if not more so.  “The first nearly awful film of 2011.” (Richard Roeper, RichardRoeper.com) To be fair, the buzz isn’t all bad.  Audiences seem to really like it.  However, even with that, The Green Hornet’s reviews are certainly less than phenomenal.

Metacritic: Generally unfavorable (Score: 38 out of 100)

This is not the buzz I wanted to see coming out of this movie at all.  I had high hopes for Hornet, because A) Seth Rogen is awesome B) Christoph Waltz is fantastic and C) Michel Gondry is a great director.  But this seems to be one of those films’s that aren’t equal to the sum of its parts.  However, it still might be a fun way to waste a Saturday.  It’s not a disaster…but its one hell of a disappointment.

Overall: Catch The Green Hornet at A DISCOUNTED PRICE. Synopsis: After discovering that his best friend’s wife is having an affair, Ronny Valentine (Vince Vaughn) begins to grasp with the quandary of whether or not to tell him.

Lousy reviews…are gay.  Not gay gay, but more like “Another lousy Vince Vaughn movie” gay.  But with jokes as smart as the one above, how could The Dilemma have failed?  To be fair, it’s a little bit more interesting then your standard bromance comedy, and apparently has it’s fair share of dark humor and drama.  But that doesn’t make it a good movie.  “Torn between establishing itself as a bromantic comedy or a relationship potboiler, the movie meets the requirements of neither. It is unsatisfying in general.” (Gary Dowell, Dallas Morning News). It tries something new, but fails miserably.  And that’s even worse then a lazy, run of the mill failure.

Rotten Tomatoes Critical Consensus: “It boasts a likable cast and an interesting premise, but The Dilemma can’t decide what to do with them; the result is an uneven blend of cheesy slapstick and surprisingly dark comedy.” (Score: 24% out of 100%)

Metacritic Score: Mixed or average reviews (Score: 46 out of 100)

Well, deciding between skipping The Dilemma or seeing it isn’t a hard choice.  You could say that it’s not much of a…DILEMMA!  God, I’m clever.

The Edge: A good cast, interesting premise, tries something new.

The Sharp End: Isn’t not very funny…which is kind of important.

Overall: See The Dilemma when it hits CABLE OR NETFLIX WATCH INSTANTLY. Well it’s certainly not the best film released in the last few weeks, this is January.  Honestly, I have a different perspective of what is good in the Spring Dump Months.  I’m just thankful we have a film coming out that is even slightly good.  If this is any indication of the quality of film for this part of the year though…we have a long 3 months ahead of us.

So, congrats The Green Hornet. Use the box office money to get Kevin James on a diet.  Seth Rogen could do it, I’m certain as hell that James could as well!

Well it’s a dire state of affairs at the cinemas the next couple of months, rest assured, I’ll be here to guide you through all the mounds of feces.  But until then, enjoy what you have.  I wish you look on your movie watching endevours, and may the cinema gods be with you! 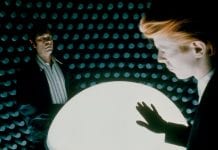 Matt Malliaros - 07/15/2020
0
With next-gen consoles comes next-gen sound. While some of that sound will undoubtedly be heard through TV speakers, they capture the full audio experience...