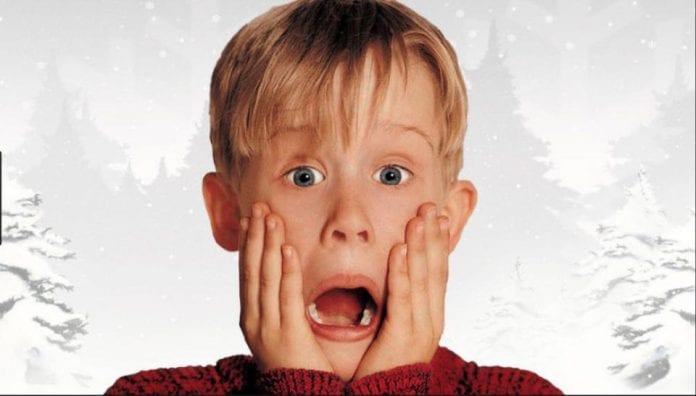 Comedy and horror seem like opposites, but they can have a lot of similarities. As proof, we take ten comedies and show how they could become effective horror movies with some minor changes.

The very beginning of drama as we know it was the ancient Greek theater. Evolving from rituals developed to honor their Gods, the Greeks began to act out the famous myths of their culture. These performances became known as the Greek tragedies, which are recognized today as being effective in demonstrating pity or fear in a way to entertain an audience. On the opposite side of the spectrum you have the Greek comedy. The comedy was later developed as a way to make assertions against powerful people, programs, or ideas in an entertaining (often unflattering) way.

In many ways, tragedy and comedy are opposites. Where one evokes feelings of loss, distress, and dread, the other can be uplifting, insightful, and encouraging. One tries to make us learn something by feeling worse about a situation, the other tries to make us learn something by making us feel better about a situation. Yet, despite their differences both are necessary to understand the human condition. If the tragedy is a fall from grace, the comedy is a return to form. Both play a crucial role in demonstrating what it means to be alive.

In film, these two areas of drama are most fully realized in the horror and comedy genres. But just as the ancient Greek theater would not be complete without both types of drama, the modern horror and modern comedy actually have more connections than first meets the eye. Consider the use of comedic elements to make horror films more effective, or the use of shock or surreal situations to surprise an audience in a comedy film.

To show off just how much some comedies are in fact related to tragedies, I’ve selected 10 comedy films which can be transformed into effective horror movies with just a few small changes. I’ve ignored satires, which are by nature a hybrid between the two genres, and left off any comedy films which are already close to being horror (Shaun of the Dead, The Cable Guy, etc.). Can you think of any other comedies which could become horror movies with just a few small changes?

Accidentally being left home alone may be a dream come true for many kids. But it would be a nightmare for parents. Think about all of the things that could go wrong. The horror version of Home Alone would have to focus on that fear. A kid left to his own devices would be an easy target for a group of criminals if he stood in their way. In real life, Micromachines aren’t an effective home security device….

Horror Film Premise: Accidentally left home alone, 8-year-old Kevin McCallister unwillingly gets caught up in the plans of a group of robbers who are trying to ransack his home. Kevin is unable to fend them off on his own, and becomes a victim to their crimes… We all have that nightmare where we’re late for school/work/wedding/ect. No matter how hard we try, we can never get to where we need to go. It’s an alway-escalating chain of anxious situations. That nightmare is this movie. A man just wants to get home to his family for the holidays, but fate has other plans for him…

Horror Film Premise: When a flight home for the holidays gets diverted, executive Neal Page has to find a new way home. A series of unfortunate events leaves Neal stranded. He has to accept the help of a man posing as a salesman, but who is actually a deranged serial killer who works his magic to get invited into people’s homes before he murders them… Funny as it may be, the possible effects of being inebriated by drugs or alcohol can be very dangerous to you and to others. While The Hangover takes the approach of making the experience an outrageous adventure, things could have turned out much more grim. The horror version of The Hangover would explore the not so funny possibilities.

Horror Film Premise: After a bachelor-party weekend in Vegas gets out of control, four acquaintances wake up in their hotel room with a collection of odd items and no recollection of what happened the previous night. In the midst of trying to work out the mystery, they find out that they have committed a series of dangerous crimes and offended a powerful criminal who is out for revenge…

The jungle is a beautiful place, but it can also be very dangerous. While Tropic Thunder does touch on the hazards of the jungle as is, I think they could take it a little further. I especially love the idea of a horror shenanigans taking place during the production of a fictional film.

Horror Film Premise: In order to make his war film more believable, an aspiring film director drops off his crew in the middle of the jungle to fend for themselves. However, a freak accident kills off the director, and the crew suddenly find themselves deep in territory controlled by a powerful drug lord, who doesn’t want them to walk out of the jungle alive… New neighbors can be a blessing or a curse. Neighbors explores the circumstance of loud and rowdy neighbors, but what if they were bad in a different way? What if your new neighbors practiced satanic rituals and raised the dead? More importantly, what if you get off on the wrong foot and they start to hate you, making you the target of their powerful wrath?

Horror Film Premise: A satanic cult moves in next door to a young couple with a new baby. Thanks to the baby, the couple are often awake at night and begin to experience strange occurrences. The cult next door denies any involvement, but the couple are sure that it is their new neighbors who are awakening dangerous spirits with their witchcraft, terrorizing their once-peaceful lives… When a relationship gets serious, one of the major steps is meeting your significant other’s parents for the first time. It can be a nerve wracking experience, and the film Meet the Parents does a good job of showing us the worst case scenario. But what if it was worse than anything you could have imagined. What if your future parent-in-laws are actually trying to kill you…

Horror Film Premise: When Greg is invited to the wedding of his girlfriend’s sister, he wants to make a good impression to her parents because he wants to propose to her. But the father, Jack, has a dark secret and is actually a serial killer. When Greg stumbles upon the truth, Jack decides he has to go….by any means possible, and without disturbing the family’s happy weekend. Artifacts of ancient origin and of unfathomable power often show up in horror films. The Mask from the famous comic series would be an excellent item around which a horror film could be based. I mean, it’s already kind of scary as is. It wouldn’t take much to make it truly frightening.

Horror Film Premise: Stanley Ipkiss is a lonely loser who happens to find a magical mask. The mask gives him incredible strength, courage, a sultry sex appeal, and magical powers to manipulate anything around him. But as he enjoys his new social life, he begins to feel ill whenever he takes off the mask. Over time it makes him weaker and weaker, but he can’t give up his new life. Meanwhile, a powerful crime lord wants the mask for himself, and Stanley finds himself being hunted down for the thing that is simultaneously giving him life, and taking it away. This film is kind of creepy as is. You have a man who messed up his opportunity to be a good husband and father try to cheat his way into seeing them by pretending to be an old woman. Back in 1993 this was high concept comedy. Today it’s disturbing. That’s why it would be an excellent horror film with just a few tweaks.

Horror Film Premise: Daniel Hillard is a father of three children whose alcoholism causes him to abuse them and his wife. During a particular bad confrontation, the police are called, and Daniel ends up divorced, in prison, and without custody. Upon release, he hatches up a plan of revenge, dressing up as the nanny for his kids to avoid his restraining order. As other people begin to suspect his true identity, including his wife, he has to take them out or risk going back to jail. The idea of mistaken identity can be a scary one. Especially if the people who are mistaking your identity are dangerous, and the person they think you are is rich and powerful. Well, that’s the premise of The Big Lebowski already, but to make it a horror film, we can turn up the paranoia a few notches.

Horror Film Premise: Bachelor Jeffrey “The Dude” Lebowski gets a rude awakening when the thugs of a powerful business man trash his apartment because they mistake him for another Jeffrey Lebowski. Seeking retribution, The Dude visits the mansion of the other Lebowski, but everyone there seems to know him, and he finds pictures of himself and a wife he doesn’t know. As he grapples with the realization of his alternate identity, his adversary continues to threaten him, and his new wife is kidnapped. He and his friends have no choice but to try and get her back so they can sort out the mess…

The King of Comedy This idea has probably already been done before. Indeed, The Joker already took the premise of The King of Comedy in a slightly different direction. But to make it a true realistic horror film, the perspective would have to be flipped.

Horror Film Premise: Jerry Langford is a successful TV star, but his fans are a little obsessive. One in particular, Rupert Pupkin has devoted his entire life to becoming Jerry. He goes so far as to try and live in his house, breaks in to his office, and steals his clothes. Despite a restraining order and a security team, Pupkin keeps invading Langfor’s privacy, and eventually hatches a plot to kill Jerry and get plastic surgery to become him…