Curses and misfortune have persisted in the realm of artistic creation since the premiere of Shakespeare’s Macbeth, quite possibly before that.  But the stories behind the curses that terrorize some productions would seek to prove that the supernatural can affect more than just the imagination.  The following stories are just a few of the more intriguing ones we’ve discovered haunting the hallowed history of Hollywood.

A Confederacy of Dunces

Widely regarded as one of the most cursed projects in Hollywood, A Confederacy of Dunces, based on the absolutely hilarious and bestselling book by John Kennedy Toole, has yet to even get off the ground.  It probably could, if every lead star attached to it didn’t happen to die.

When the moneymakers in Hollywood (and there have been many attached to this) decided to adapt the book for the screen, numerous A-listers sought out the lead role.  Unfortunately, the closer they got to starting, tragedy would fall.  First there was John Belushi who died after he accepted.  The role then passed to John Candy.  After his death, the role passed to Chris Farley.  Then the role passed to Harris “Divine” Milstead, who also died shortly thereafter.  And the curse was only picking up steam.

After the deaths of nearly every overweight funnyman in Hollywood at the time, Paramount began to lose total interest in the film, the head of the Film Commission of Louisiana was murdered, and then Katrina nearly wiped out New Orleans.

Arguably one of the most well-known film curses, the Steven Spielberg and Tobe Hooper film and trilogy was plagued by the tragic deaths of its players.  It is said the curse stems from the fact that real cadavers were utilized in the filming of both Poltergeist I and II, an act many pundits have decried as ghoulish and utterly profane.  Stranger still is that the premise of the entire film series is based on the supposed supernatural consequences of disturbing those laid to rest.

During the six years it took to release the three films, Dominique Dunne (the older daughter in the family) was strangled by her boyfriend in ’82, Julian Beck died unexpectedly from stomach cancer in ’85, Will Sampson died suddenly of post-operative complications from a kidney operation in ’88, and the worst part, Heather O’Rourke who played Carol Anne, tragically died from septic shock due to a misdiagnosed bowel obstruction.

What is most notable about the deaths of these talented individuals was the extraordinarily rare circumstances that claimed their lives.  Could it be mere coincidence or were the desecrated dead exacting their revenge?

THE DEVIL IS IN THE DETAILS 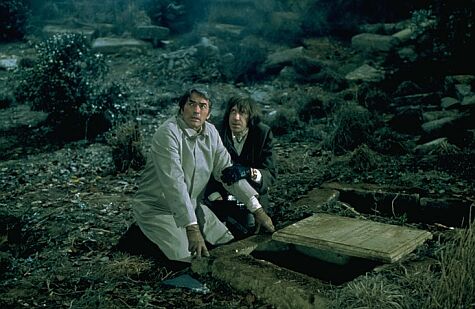 Of all the purported curses, few were as truly terrifying as the events that surrounded The Omen, a horror/thriller about the birth of the AntiChrist.  It was a film many said the Devil would not allow to be made, and the surrounding events may lend that ominous statement a rather notorious credence.

The most notable events included the suicide of lead actor Gregory Peck’s son two months before filming began; the attacking of the animal handlers by the trained Rottweilers used on set; a professional tiger handler died two weeks after filming when he was pulled headfirst into a lion’s cage and was eaten alive; the principal actors were involved in a terrible head-on crash the day filming commenced; director Richard Donner’s hotel suffered an IRA bombing; and lead actor Gregory Peck and writer David Seltzer’s planes were struck by lightning on two separate occasions.

Peck also had yet another brush with the curse when a flight he and others were scheduled to take was switched to another carrier at the last minute and the original flight later crashed resulting in the deaths of everyone on board.  And even more horrifying was the death of Visual Effect Supervisor John Richardson’s assistant on the set of A Bridge Too Far one year later.  In a scene eerily reminiscent of the photographer’s death in The Omen, Richardson’s assistant was decapitated in a car accident.

When Richardson came to after the horrific collision, the first thing he remembered seeing was a road sign just ahead that read ‘Ommen – 66.6 KM’.