We are back with another video movie review! This time we sent B.C. to go see the brand new World War II film, MIDWAYOn Dec. 7, 1941, Japanese forces launch a devastating attack on Pearl Harbor, the U.S. naval base in Hawaii. Six months later, the Battle of Midway commences on June 4, 1942, as the Japanese navy once again plans a strike against American ships in the Pacific. For the next three days, the U.S. Navy and a squad of brave fighter pilots engage the enemy in one of the most important and decisive battles of World War II.

What did BC Think of the film? Find out below! Don’t forget to comment your thoughts on the film! 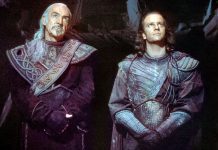