Movie fans are the greatest.  They always find some of the most unique ways demonstrate and show their love of films.  Earlier this week we showed you some of the best movie themed tattoos we’ve come across, but this time I’m going to show you something that’s all very near and dear to our hearts: cake!

Geeky weddings are nothing new, and have been done many times over, but today I really wanted to focus on the cakes.  Let’s face it, not all of our wives/significant others are understanding enough to give us a full blown out nerd wedding of our dreams.  But many of them are willing to concede on the cakes.  So if you’re about to tie the knot and want to implement your love of films in some way, maybe these cakes can give you an idea.  Just be sure to not drool on your keyboard. 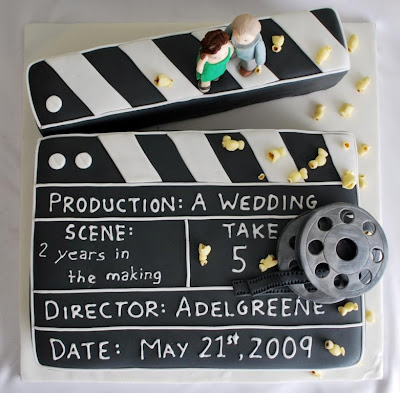 Starting things off fairly simple here, but still an interesting idea.  While I think the details could be a little better (I mean I’ve seen Albertson’s cakes with more finesse), overall it’s a win.

I know it’s got the cheesy photoshop effects on it, but ignore the quality of the picture, and you’ll find this is a pretty neat little cake.  I believe this is actually the Groom’s cake, as I can’t imagine this tiny thing to be the full wedding cake.  Perfect for those movie buffs though.

Let’s move away from the generic film cakes and get down to the geeky ones.  A nice Star Gate cake is just the thing to tell people you’re a nerd…and you like it.  Now if only they’d had an Anubis head poking out of the portal, then we’d be in business. It always surprises me the huge following this film has.  I thought The Nightmare Before Christmas was a great movie, but I never anticipated such a following for it.  Regardless of your feelings on the film, it’s hard to not like this cake.  More than anything it’s just well designed and a treat to look at.  I would almost feel bad cutting into this thing. This is just cool.  There’s not much else I can say about this one. Sweet Alien design with the little aliens bursting forth.  The only way this could be cooler is if they also had face hugger cupcakes to go with it. 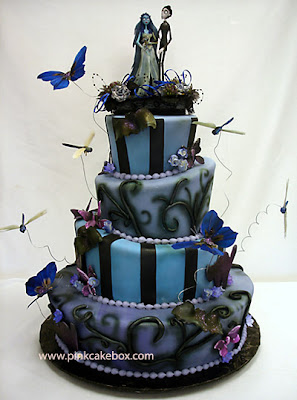 Like the Nightmare Before Christmas cake, this one is very detailed and nice to look at.  Truly it feels more like a decoration to the wedding than anything edible. 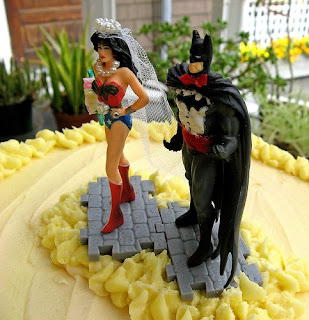 This is just ridiculous, Wonder Woman would never marry Batman… Now we’re talking.  This Star Destroyer cake that can serve up to 100 people.  The detail’s not perfect on this one, but for as big as it is, it’s easy to not care so much.  This will undoubtedly dominate any other decorations at your wedding, so unless you have a Death Star disco ball over the dance floor, this will be the highlight.

I feel bad showing this one, almost like the Star Wars geek inside of me is just throwing a fit.  Regardless, these Borg cakes are very cool, and judging by the amount of booze in the background, no one will probably notice.

This one took me a second to figure, out but if you look closely (and watched this film as much as I did when you were younger) you can figure it out…Give up?  It’s a Back to the Future wedding cake!  The clock tower gave it away for me, but if you look on the left side you’ll see the telltale DeLorean racing down the street.

This is a great design, but if you know your Star Wars stuff, it makes very little sense.  You have Ackbar marrying Mon Mothma, and Ewok cupcakes. None of these things really go together, but it’s fun, and detailed to a high level.  I think using the phrase “It’s a trap!” would be too cliche (especially for a wedding), so I just won’t make the obvious joke. 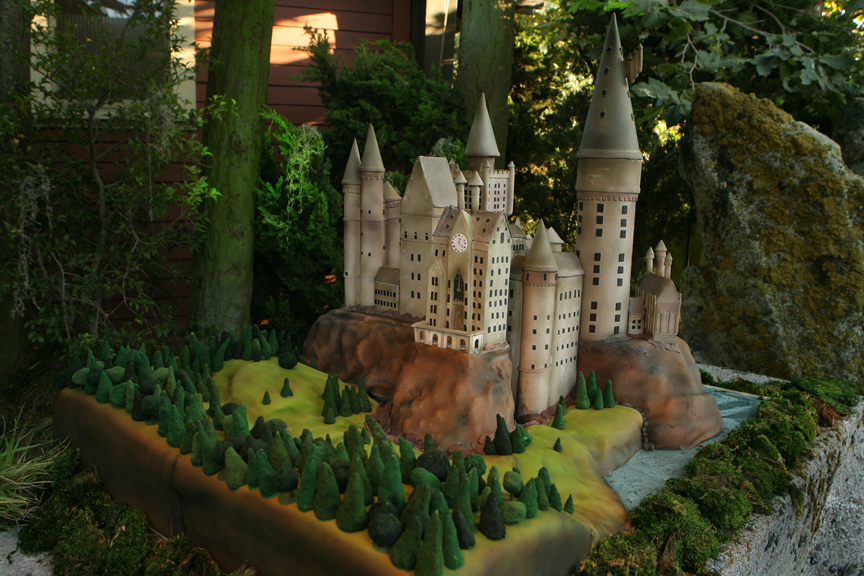 Does your bride give you that special magical feeling in your heart?  Well then you might consider going with this detailed Hogwarts (from Harry Potter, if you’ve been living under a rock for a decade) castle for your wedding cake.  I don’t know about you but those trees on the bottom of the cake look delicious.  Though this design brings up a very interesting question; how the hell do you cut this?

So sci-fi and magic might not be your thing, but if you’re a fan of big giant apes who could steel away your loved one, then this is the cake for you.  On the top of this mountain sits the king himself, holding the fair lady in his palm.  By far this is the best looking Kong cake I’ve seen, as the others were only…meh.  This has great detail on it, and it’s large size can easily accommodate a large wedding party.

If you’re a movie lover about to tie the knot, hopefully these cakes will give you some ideas on tricking out your own wedding.  What better way to combine the two loves of you life (hopefully one of those is your significant other)?  Cakes, and other minor decorations, are great ways to integrate your passion, without completely ruining the traditional feel of your wedding (if that’s what you want), so it’s really a win win situation.