What I’m about to discuss deals mostly with a particular character in the film, and many of the details are going to be very spoiler intensive. I mean it, if you don’t want to know one of the biggest twists/plot points in the film because you haven’t seen it yet…I wouldn’t read on. If you’re willing to brave it, or have seen the film, then I encourage you to proceed for my take on the meaning behind the film’s title.

Since it was announced that the title would be The Dark Knight Rises, many fans of the series have wondered what exactly it alludes to. The obvious answer is that Batman is rising up in a figural sense by overcoming obstacles and saving Gotham once more. But over the past year or so, there have been several theories, ranging from the intriguing to the ridiculous.

I don’t know about you guys, but I tend to really analyze a film. It’s just what I do, and one of the things I love doing is analyzing a film’s title. Film titles always run the gammut from what they could mean. They may be simple titles to highlight a person’s name (Spider-Man, The Avengers, etc) or they could have a deeper meaning to the overall story. Those are the kinds of titles I love, and when I got the chance to watch TDKR I was pleasantly surprised to discover that the title held a much deeper meaning than I had originally thought. Initially I took the title of the film at face value. I didn’t place much stock in it for being deeper than your basic ‘Batman has to rise up and overcome’ meaning, even though that is a part of it. Batman does face a lot of opposition in this film. This is no ordinary villain he’s facing, he’s tackling an entire organization lead by a far more brutal leader than he’s faced before. While he’s not ‘broken’ as he is in the comics, he does sustain a massive injury that keeps him out of commission for a time, as well as being locked in an underground prison.

All of those things could be considered stuff he has to ‘rise’ up from; especially considering that he has to literally climb up out of a hole in the ground to escape the prison. Yet after watching the film and thinking about it, I’ve decided that the title may not be referring to Batman at all…at least not the one in the film. In truth, I feel that the title is referencing the John Blake character (Joseph Gordon-Levitt).

The major plot surrounding Blake is his desire to do more, and be a voice of justice much like Batman. I mean, he figures out Bruce Wayne is the caped crusader all on his own, and throughout the rest of the film, prods Wayne for information about why he did it and stuff like that. Once Batman makes his return near the end of the film, there were moments where I felt like it was entirely feasible for Blake to don his own mask and costume. In short, it becomes obvious that Blake is heading in the same direction towards taking up the masked vigilante cause all on his own.

Rather than have him being a sidekick (even though his real name is revealed to be Robin, which was a fun little nod), the film sets Blake up to be the very next Batman. Since Batman Begins, Nolan has infused a central theme in his Bat-films…Batman is a symbol. The Batman is whatever Gotham needs him to be, and he doesn’t necessarily have to be any one person. The Batman can be anyone, and that’s mentioned a few times in Rises.

Towards the finale of the film, it’s evident that Batman feels Blake is worthy/able to take up a similar role to his own. Batman even chides Blake at one point saying “I told you if you work alone, you need to wear a mask”.

So when Bruce Wayne fakes his own death and starts life anew, I think he did it knowing that Gotham would still be under the protection of Batman. Hell, he all but told Blake to do it. Which makes sense, seeing as how Bruce has been searching for a way to live life without Batman, and be free of his own need for Batman. He was hoping Harvey Dent could do it in the previous film, but was able to find the right person in John Blake. Otherwise, I don’t see Wayne faking his death and leaving the city behind.

For me one of the most pivotal scenes for this plot line, and the one I feel the title truly comes from, is the very last scene. John Blake finds the Batcave and enters it. While walking around he steps onto one of the motorized platforms that rises from the water, and leads into the Batcave proper (with the computer, suits, and all that). This is the Dark Knight rising. It’s a new hero coming to take up the mantle Bruce left behind, and to continue being the symbol Gotham needs.

The entire film felt like it was leading up to such a moment, and once it happened, I realized this is exactly what the film title is referencing. Does it apply to all of the other stuff about Batman overcoming the obstacles? Sure, but I feel the deeper meaning behind the title is how one Batman ‘falls’ while a new one rises. Someone else to take up the cause and be the hero the city needs. 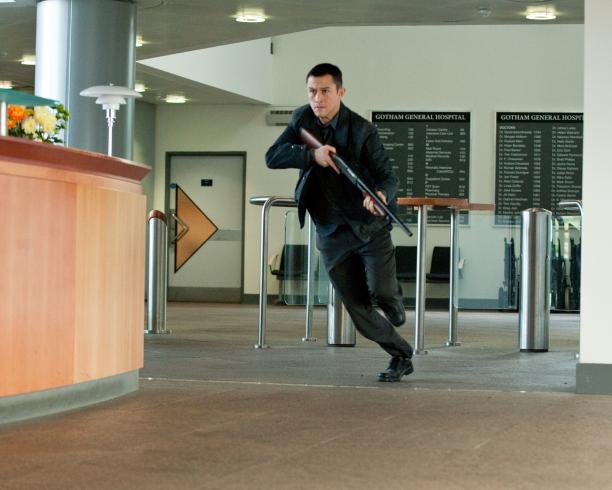 It’s a very powerful scene, and to be honest, probably my favorite in the entire film. Even though it ends and we never get to see Blake be Batman (and never will since this is the final film for Nolan before a reboot), it’s evocative and emotionally fulfilling.

I suppose that’s enough of my rambling, but if you had another idea on the meaning behind the title, I’d love to hear about it as well!