In the 1940s, overshadowed by the Second World War, Hollywood began to produce darker and more cynical films to reflect the mood of the nation. In this decade Hollywood saw the birth of film noir and a boom of gangster pictures; writer/director John Huston and his frequent collaborator, Humphrey Bogart, contributed to these genres with The Maltese Falcon and Key Largo, respectively, both classics in their own regard, but it’s 1948’s The Treasure of the Sierra Madre which dug deeper into the human psyche, and whose influence extends into the 21st Century’s best cinema.

The story is simple: Dobbs (Humphrey Bogart) is looking for work in Tampico, Mexico and runs into fellow Americans Curtin (Tim Holt) and Howard, played by John Huston’s own father, Walter Huston. Howard informs the two men, broke and out of luck, that prospecting is good in the Sierra Madre Mountains. Using Dobbs’ winnings from a lucky lottery ticket, the gang buys supplies and starts digging for gold. What follows is an examination of greed, suspicion, and violence. Once gold is discovered, Dobbs slowly goes mad, and his distrust for his partners grows, culminating in a violent confrontation.

“I know what gold does to men’s souls.” -Howard

In a way, Dobbs and Curtin represent two separate sides of the coin: Curtin dreams of owning land and picking fruit with a family; while Dobbs dreams of one thing: gold. For Dobbs, money is the ultimate end all. It’s not about having means to achieve a goal, it is the goal. It’s the ultimate seducer. Obtaining the metal becomes the only thing he can do, regardless of who gets hurt, or even worse, who dies. 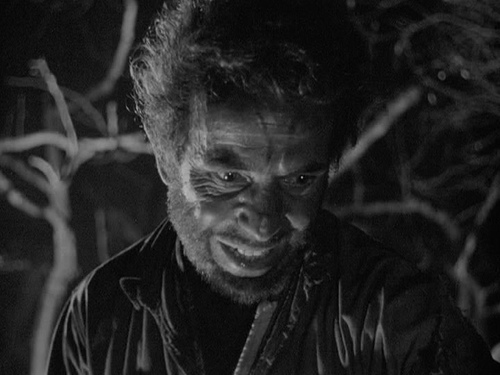 Martin Scorsese’s The Wolf of Wall Street comes to mind. Often mistaken as a shallow lifestyle porn film, it’s really The Treasure of the Sierra Madre retold in a Wall Street setting. Jordan Belfort (Leonardo DiCaprio) is the Dobbs of the 80s and 90s. He wants money. For what? Another house, another yacht, more drugs and booze, sex. And at what cost? Belfort does not show any concern for those whose money he is stealing to build his fortune. He cares not for the bankrupt average Americans who line his pockets based on his lies. There’s no emotional fulfillment there, he must keep acquiring money and buying stuff, because that’s what one does, right? He’s certainly not picking fruit with his children. For some, massive quantities of money is enough, despite who gets hurt in the process.

Perhaps a more obvious example is Paul Thomas Anderson’s 2007 masterpiece, There Will Be Blood. Anderson made no secret that The Treasure of the Sierra Madre was a major influence on his oil opus; even saying that he played it each night before bed while on-location in Marfa, Texas filming the movie. These parallels are even clearer: Daniel Day Lewis plays Daniel Plainview, a silver prospector who discovers oils in the San Joaquin Valley of Southern California. What follows is a portrait of madness when Plainview becomes driven to take control of it all, letting no man or his own child get in his way.

Stories of driven characters stopping at nothing and willing to hurt anyone who gets in their way reflect something deep within the human psyche. The human level of sentience, and our knowledge of death creates a hole inside of us. Our ability to create structures and systems to control every aspect of life that we can has led us to greed. Money doesn’t exist. It’s a system we created to exert control. Characters like Dobbs, Belfort, and Plainview can’t exist day-to-day facing their own mortality. The drive they feel to obtain the most gold, money, or oil exists to distract from their own deaths. Their ability to understand that this is all there is erases any empathy toward others–those who they hurt to get what they want. But that’s just it: death comes for us all. And at the end of the films our greedy protagonists end up dead, drunk and alone, or empty. The Treasure of the Sierra Madre culminates with a violent showdown between Dobbs, Curtin, and a gang of bandits. After Dobbs’ demise, a wounded Curtin and Howard find that all of their gold has blown away into a wind storm. Howard laughs ironically, and Curtin remarks that, hey, it’s nothing compared to what Dobbs lost, his life. Money can buy many pleasures, but if one doesn’t take pleasure in anything except obtaining more money, cinema suggests that they may pay the heavy price.