There are scary movies full of violence, terrorific monstrosities, and suspence we watch and then later laugh about. There are also those scary movies so off-putting and disturbing they seemingly stick in our minds forever. These are the ones that keep you up at night, changing shadows into demons, and standing up the hairs on the back your neck at the slightest inconspicuous breeze. These are the films from which the horror genre earns its name. They’re not just scary, they instill a sense of fear in the viewer that lasts long after the ending credits roll.

Luckily for us, there are some ways to combat the unsettling experience of a truly effective horror film. Most effective: watching the film with other people. Watching horror films as a group can make the scary bits funny, the bloody bits awesome, and the screamy bits good fun. The reason this works is because other people have different perspectives than you, and they help you experience the film in a different way. If they’ve seen a movie before, they may not jump at the jump scares, or be as shocked at the twists. Watching a scary movie with someone else gives you support.

But alone? Alone your mind is unrestrained. It races off to dark places, and you fear the worst. There’s no one around to protect you, and the survival instincts kick in. For some people, that’s part of the fun of watching a horror film; experiencing the terror. For others, watching scary movies with other people is the only way to make it through them. For those people, we discuss our picks for the scary films for which watching with others is almost mandatory.

What films would you never watch alone? Join in on the conversation on twitter: @cinelinx

Like many great horror films, the premise of The Descent is very straight forward: A group of women go on a spelunking excursion, and bad things start to happen underground. What sets The Descent apart from other “and then bad things happen” horror films is two things. First, the film’s cast is all women. It is usually common to have women as the target of a horror film’s horrors, but usually there is some tough guy character who tries to save her, or some wise old man that has seen it before and helps out. Not in the Descent. The filmmakers wanted to change the formula up, and so they made the cast all female. Furthermore, they made sure the characters felt like actual women. They talk about their situation and their circumstances like real people, not horror movie tropes. This makes the screenplay feel more realistic, which in turn makes what happens on screen more disturbing. Suddenly, it’s not so easy to suspend your disbelief.

The second aspect of this film that makes it so terrifying is the “underground” aspect of the premise. You see, in the caves there is no light. No light means that this ends up being a very dark film. I don’t know about you, but if I am sitting in a darkened room all alone and the screen echoes my own environment, the experience becomes unsettling. Your ears perk up to make up for the lack of eyesight, and the hairs on the back of your neck rise up. Alone, you start to wonder if every little noise outside is a crawler coming to get you. Alone, you watch the blood dripping on screen and the characters screaming for their lives and suddenly you’re not so comfortable on your own couch.

Everyone knows I’m a big weenie when it comes to horror films, but thanks to the “help” of my scary movie-loving girlfriend, I’ve seen a whole bunch of them over the last few years. Even better, there are plenty that I legitimately enjoy, even as they were forcing me to change my pants. That said, it’s incredibly rare if I want ANY horror movie by myself, but if I had to choose one I for damn sure wouldn’t watch alone at the house…It’d be Sinister.

The premise of the film is fairly simple; a struggling true crime author, looking for his next big story, moves his family into a new house. Unbeknownst to everyone else, it’s the location of a gruesome mass murder for the previous family members. Of course, it doesn’t take long for strange things to happen, and the mystery of what happens is far darker than anyone expected.

While the film seems to setup a typical ‘haunted house’ story, it goes far deeper than that and delivers and some serious chills. A mysterious box of 8mm tapes containing footage of even more shocking, and inventive, murders kicks off a dive into the lore behind a child snatching demon.

It’s nuts. One of the things I loved about it was the lore and mythology it used to tell it’s story, taking it beyond a simple ghost story and getting into some terrifying territory. What makes all of the events truly horrifying is that CHILDREN are on the ones committing the gruesome deeds. The idea that innocent kids could become so corrupted and enticed to brutally kill their families to please a demon is scary indeed. With four kids in the house, I’m definitely not about to watch this one alone. I love horror, I started with reruns of Dark Shadows when I was 5. Most of the universal monsters lineup were things I watched as a kid. Dracula, Frankenstein, The Wolfman and many more. So I finally hit my teens and along comes a movie called Make Them Die Slowly (US title) a 1981 Italian Cannibal movie that’s more gore and gross-out scenes than actual horror. This grindhouse-style flick has got to be one of the most disturbing flicks I have ever seen.

The movie itself is pretty simplistic in that we have a group of tourists in Paraguay who meet up with 2 people in the rainforests and one of them is injured. They have done something bad of course, and they keep what was done hidden from the tourists. When they try to rest for the night they are found and captured by a cannibalistic tribe who then proceeded to torture, filet, and chow down on the group of “visitors”. As I said, this one was not really about the horror but ran on pure gross-out factor. Although I have to admit as a kid back then I’m watching this and I didn’t wanna go on any family vacations that would have me anywhere near “village natives” or “forests”.

This may possibly the movie that made me love gore horror. Supernatural stuff is fine and dandy. Eons old monsters who drink blood or cursed humans are ok also, but when you have an average bunch of folks who end up in a situation that could actually happen. That gives the story that little bit extra that can disturb me. This movie also has a scene with bugs that made my stomach do flip-flops when I saw it. So grab a buddy and point at the screen while yelling “EWW Oh my god, Look at that .” It’s ok I won’t tell anyone you’re internally screaming at what you’re viewing on screen.

The horror genre as a whole terrifies me so there are actually many films that I wouldn’t want to watch alone, but the one that stands out is the original Halloween. I’m a naturally anxious person, it doesn’t take much to put me on edge, and the thought of watching a film where Michael can (and does) turn up anywhere with no warning terrifies me. I could not possibly watch this film alone because my imagination would run wild, turning every sound in the house into the killer being after me (never mind that this is “just a movie,” it’s perfectly real to my mind).

However, if I were to watch Halloween with a group of friends, their presence would keep my anxiety in check, plus they could all reassure me that Michael isn’t about to pop out of a corner.

What makes Halloween so scary for me is Michael himself. He wears this mask that turns him into this unblinking, unfeeling “thing” and that just makes him utterly terrifying to me. It’s also scary that Michael can just turn up anywhere and disappear just as quickly. That means it’s almost impossible to predict when or where Michael will appear next.  Also, there is that unforgettable music that seems to pop up whenever Michael does. To this day, if I even hear a snippet of the Halloween theme, I get tense and anxious, because the melody is so linked to Michael in my head. 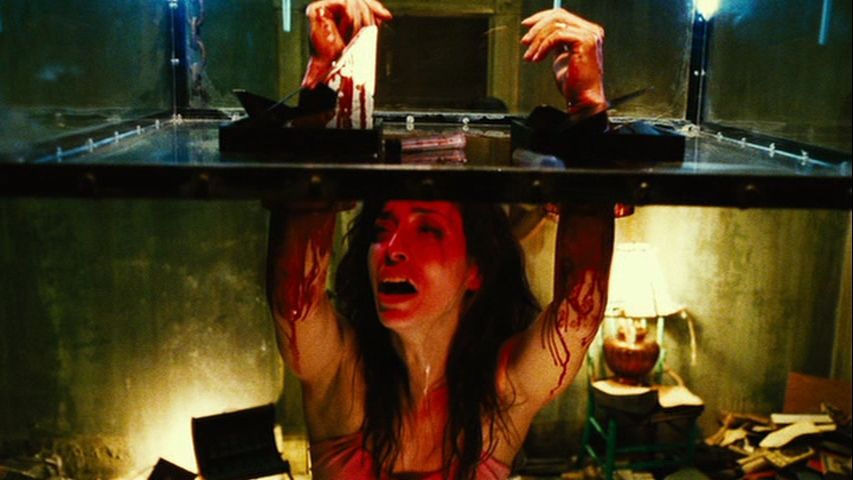 I am going to cheat a little bit here. My pick is any of the Saw franchise, not including the first film. While the first film is obviously best the franchise, it isn’t enhanced by watching it along with others. THe rest of the franchise, pick any film, is incredibly more fun to watch with a group of people. While not immediately scary the Saw films can leave you with some frightening imagery, and a “what if” feeling. They can make you think “what have I done in my life that would get me kidnapped and put into a torture trap” and that thought alone can lead you down a dark and terrifying path as you lay in bed and your brain decides it is not ready to sleep. Those thoughts then provoke will what would my trap be? Would I be able to do what is necessary to live? Could I kill someone else so that I could live? This is the stuff true nightmares are made off.

But what makes the Saw Films better to watch with others? Well the first one is a pretty straight forward film, which is driven by the story and drama. As the second came along it began to become driven by the traps. Which became the best part to watch. By the time SAW 3D(SAW VII) showed up, some of the traps weren’t even connected to the story and were so outlandish that it just became fun. Watching these films with a group and being able to react with everyone to gore, to the silliness, to the cheap scares are what make any one of these 7 films a good choice for a group movie night. Now, do you want to play a game?