It’s hardly 9 AM in Hollywood when a young man from TCM taps the microphone at the legendary Egyptian Theatre; his thick Georgia accent stands out in Los Angeles (TCM’s headquarters are in Atlanta). The theatre is packed for the first showing of the morning. Everyone’s elbows are rubbing against one another and our knees are pressed against the seats in front of us – but where else can we see a 35mm print of Ginger Rogers (before she was THE Ginger Rogers) in the 1933 screwball comedy Rafter Romance?

The TCM rep (whose name I forgot to write down) introduces legendary film critic Leonard Maltin, and like that The South of the United States and Southern California meet for the love of celluloid (a little later Australia’s own Alicia Malone would also introduce a film, adding the southern hemisphere into all of this).

I’m in a room full of film lovers. Not once did I see the glow of a cell phone, hear the louder-than-you-think hushed voice of someone explaining the plot to their companion, or even get my seat kicked. Is there a better way to see movies than with 500 people who love movies as much as you? There isn’t. I can confirm that.

Quick note: there are tons of amazing films playing at the TCM Film Festival this year. Some of my favorites of all time in fact, ( Casablanca, Harold & Maude, Some Like It Hot, Bridge On The River Kwai, Bonnie & Clyde,  Rear Window ) but I wanted to only see films that I hadn’t seen before.

Let’s get into Day One of the TCM Film Festival, starting with, you guessed it: Rafter Romance (1933) – William Seither directs this romantic comedy about two broke New York tenants who fall behind on their rent and are forced to share the attic; however, they’ve never met. She works days, he works nights, and they begin a roommate feud that reminded me of my worst stories as an RA in college – without ever meeting. The twist? They fall in love, out on the streets, without knowing they’re sharing a living space (and that they hate each other). Ginger Rogers and Norman Foster shine, but this is Ginger’s movie. It’s a pre-code film, so there’s racy humor (and racist humor), and lots of skin, surprising for a 1933 film. I could hear the crowd gasp when Ginger slowly takes off her stockings with a bareback top.

The movie has an interesting story that came with it. Merian C. Cooper, legendary director of King Kong, owned the rights to the film for years after winning a lawsuit when he realized he wasn’t getting the royalties he was owed from his producing career. After a lot of horse trading TCM was able to secure the rights to air the film, along with five others the Cooper estate owned. 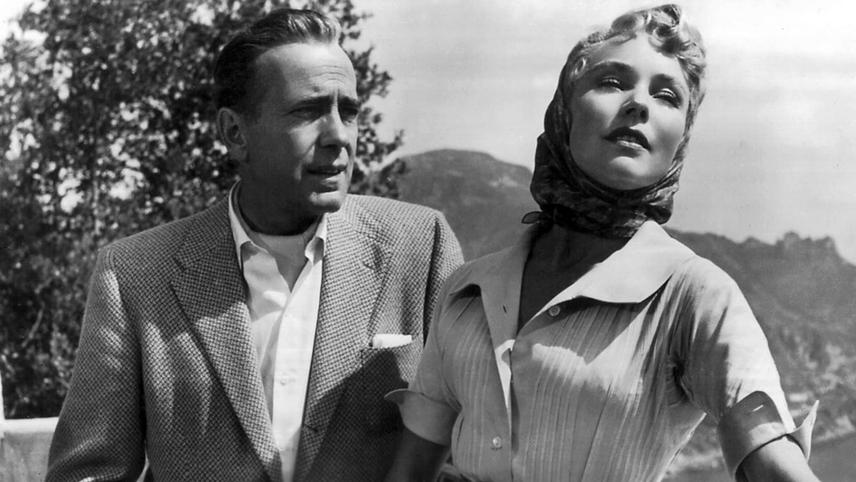 Beat The Devil (1953) – If the names Humphrey Bogart and John Huston didn’t get your ass in the seat, how about the first screenplay by legendary writer Truman Capote? With those three names attached and a title like that, I was pleasantly surprised when the movie rolled (er, began – this wasn’t a film print but a beautiful 4K restoration) and found it to be a hilarious farcical take on the dark noir films Huston and Bogart were famous for making. It’s best to check this one out and enjoy the unraveling for yourself.

Present at the screening was Angela Allen, simply listed as “Continuity” in the credits, who at 88 was sharp as a knife. She told us stories about how the movie didn’t have a script when they got to Italy to begin shooting. How Huston brought Capote in to write as they went, and how they had to shoot in order because “we didn’t know where we were going!” Allen worked with Huston on 13 pictures and seemed to remember Huston and Bogart fondly. When you go to these screenings the crowd tends to clap and cheer during each major credit, it was beautiful when Angela Allen – Continuity was cheered as she sat watching her movie all of these years later.

Barefoot In The Park (1967) – Based on the play by legendary playwright Neil Simon, who also wrote the screenplay, and starring Jane Fonda and Robert Redford, Barefoot In The Park is a snappy, witty, comedy about two newly weds sharing a very small apartment in New York City.

I didn’t know anything about this film going into it, which was lovely, except that it was written by Simon, whose plays I’ve loved for over a decade. Jane Fonda is Corie, a firecracker whose passion for her husband has no bounds. Redford plays Paul, a slightly calmer attorney who moves into the new apartment without ever having seen it. They’re forced to examine their relationship in tight quarters. The film is funny, fast paced, and bittersweet.

For those unfamiliar with Simon, you might know one of his acolytes Aaron Sorkin. It’s hard not to imagine a young Sorkin watching this film and being inspired for every romantic relationship he would write in the future. Hell, he would go on to cast Jane Fonda in his latest show The Newsroom.

All and all, each film was a pleasant surprise and a treat to see on the big screen, in a packed house with fellow film lovers.

Check back this weekend with more coverage from the TCM Film Festival. And follow me on Twitter for live updates.