My second day at the TCM Film Festival started off with a healthy dose of frustration. Apparently, Saturday morning in Hollywood wasn’t only home to the TCM Film Festival, but also to the Hollywood Half Marathon. I drove my normal route from the Valley and when I noticed  Hollywood Boulevard was closed, I assumed it was for filming or some red carpet set-up so I drove east on Franklin hoping to make my way to Sunset and double-back to the parking garage within a block or two. Boy, what a bad move. I spend half an hour driving east, past Los Feliz waiting for the roads to open, and ended up driving all the way back to where I was before, going one block west—where, what do you know, folks? Hollywood was open for business.

Let’s get into the films, shall we? 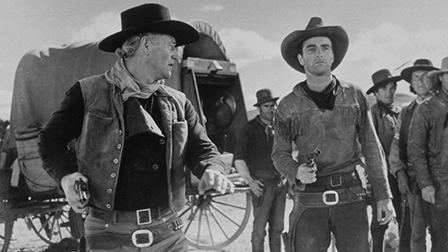 Red River (1948) – I’ve only been deep diving into westerns for a couple years now. I used to be turned off by the seemingly contradictory claustrophobia that the western has lingering underneath all the wide shots of vistas and plains. I’m not sure which film changed that for me, probably Sam Peckinpah’s The Wild Bunch, but now I can’t get enough.

Damn, I’m so relieved I didn’t miss this one on the big screen. Red River was directed by one of my favorite directors Howard Hawks. It stars John Wayne and a very young and handsome Montgomery Clift. It’s about a cattle rancher who moves his herd from Texas to Kansas. The lead’s story has elements of Fletcher Christian and William Bligh, just supplanted into the American west. Oh, and it’s very funny.

The most interesting thing going on in this film, however, is watching John Wayne and Montgomery Clift act along side one another. Wayne, representing the old school acting styles of 30s & 40s Hollywood, while Clift was very much on the first wave of the method-style acting that James Dean and Marlon Brando would make popular. Clift’s performance lives inside of him. It’s easy to see him living his character with his eyes, internalizing every second in the scene while Wayne plays it straightforward. Not to take anything away from Wayne’s performance. It’s probably his best. John Ford, who directed Wayne fourteen times, said to Howard Hawks when he saw the picture, “I didn’t know the big son of a bitch could act!” 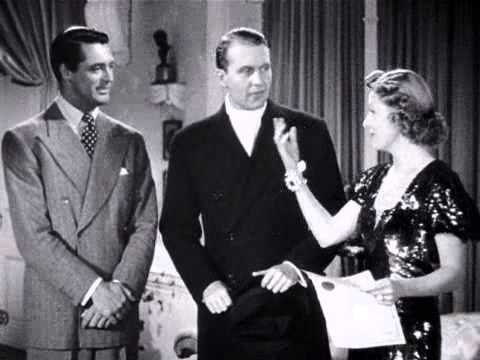 The Awful Truth (1937) – Part of me just wants to type “Cary Grant, what else can I say?” But really, you can’t go wrong with Cary Grant in his 1930s screwball comedy years. Starring alongside Irene Dunne’s Lucy—who hilariously matches every second of Grant’s charisma and charm—Grant plays Jerry and the two decide to divorce.

Hijinks ensue as the couple constantly finds themselves in each other’s company. It’s a landmark film for Grant as it’s noted to be the first film of his where he plays that charming & comedic Cary Grant persona he would ride on for years in some of his bigger films.

Bye Bye Birdie (1963) – I wasn’t expecting to love this as much as I did. Probably because all I knew about it was the Ann Margaret opening song on the treadmill in front of the blue screen from an episode of Mad Men. But I was pleasantly surprised.

Bye Bye Birdie is a non-stop comedy satire riffing on the success of Elvis Presley. His counterpart is Conrad Birdie, who’s drafted into the army and a farewell concert is planned involving a lucky girl from Ohio who gets to kiss the hunk on the Ed Sullivan Show.

Everyone in this movie is perfect: Ann Margaret never slows down as said girl from Ohio, but also it’s the first on screen appearance of Dick Van Dyke (who reprises his Broadway role of Albert). Janet Leigh sings and dances, and Ed Sullivan shows up as himself. The laughs don’t stop and the songs only get better as they go on. It’s loud, colorful, fun, clever and sweet. And out of all the movies I saw, this was the one I was most relieved I went to on the big screen in a packed house.

Unfortunately this ends my coverage. Previous commitments prevented me from attending any screenings on Thursday or Sunday, but I hope I can do this again next year. It’s incredible. I’ve never seen movies with so many folks who live and breathe film like this before. And not only movies, but classics. It’s revered with this crowd. They clap at the star’s name in the credits and again when they appear on screen for the first time. And it’s great to know people still love and watch these films, because it’s easy to get caught up in the big blockbusters (I dig em’ too!) or the remakes (why not?) but for any movie lovers out there, subscribe to FilmStruck and explore. You won’t regret it.

Thanks for tagging along with me. Keep an eye out for more Another Film Podcast and features on classics coming in 2017.