Road trip movies are all about hitting the open road and seeing the sights, right? Well…not always. Here is a look at ten films which don’t exactly check all the boxes of a classic road trip film, but otherwise could be considered as one.

The classic road trip movie features one or more characters at the wheel of an automobile spending much of their time driving across the country. The purpose of their expedition can vary, the method of their transportation can vary, even the type of film can vary. Road trip movies have traditionally been about vacation, travel, or moving to a new place. The common theme is that the setting keeps changing as the film progresses.

Of course, there are plenty of films which follow this general formula, but may not otherwise be considered road trip movies. Previously we looked at the best examples of a traditional road trip film, but what happens when you increase the scope? This is a look at the types of films which may not come to mind when you think of a road trip film, but are still very similar in premise or execution. Criteria for such films are as follows: 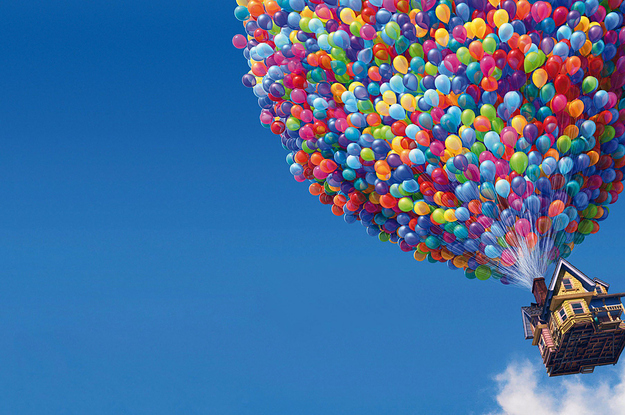 Premise: Carl Fredricksen, a 78-year-old widower, is about to fulfill a lifelong dream. Tying thousands of balloons to his house, he flies away to the South American wilderness. But curmudgeonly Carl’s worst nightmare comes true when he discovers a little boy named Russell is a stowaway aboard the balloon-powered house.

Why it is a ‘Road Trip Movie’: The entire premise of the film is about leaving the challenges of modern life behind, and the appeal of travel as a means to do so. It had been Carl’s dream to explore the rain forests of South America, and that’s just what he gets to do. Road trip movies frequently find the romanticism associated with the idea of travelling does not meet reality, and Carl’s encounter with his hero, the explorer Muntz, is a good representation of this. 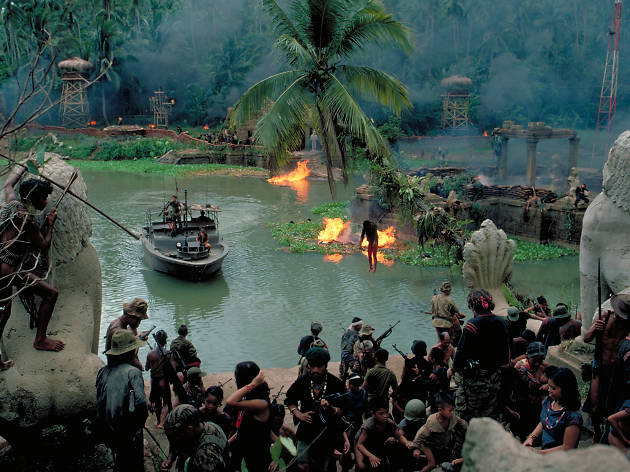 Why it is a ‘Road Trip Movie’: Ralph Waldo Emerson once famously said, “Life is a journey, not a destination.” This statement perfectly encompasses Apocalypse Now. The main characters are trying to find something/somebody, but the film is more about everything they encounter/experience along the way. The journey itself is what helps us understand Kurtz’s condition. Travel is often about searching, in both internal and external terms. Apocalypse Now is a film which does both at the same time.

Premise: America is a grim, gray shadow of itself after a catastrophe. A man (Viggo Mortensen) and his young son (Kodi Smit-McPhee) wander through this post-apocalyptic world, trying to keep the dream of civilization alive. They journey toward the sea, surviving as best they can on what they can scavenge, and try to avoid roving gangs of savage humans who will turn them into slaves, or worse.

Why it is a ‘Road Trip Movie’: I mean, it is a movie called ‘The Road’. But it is also something much more than that. Great road trip movies are about both a physical journey and the emotional/physiological evolution required to complete that challenge. The Road is as much a film about the challenges of surviving in a post-apocalyptic wasteland as it is about the journey of parenthood and the sacrifices therein. Also like most road trip movies, the main characters in The Road are driven by a hope they will find something better than what they left behind. 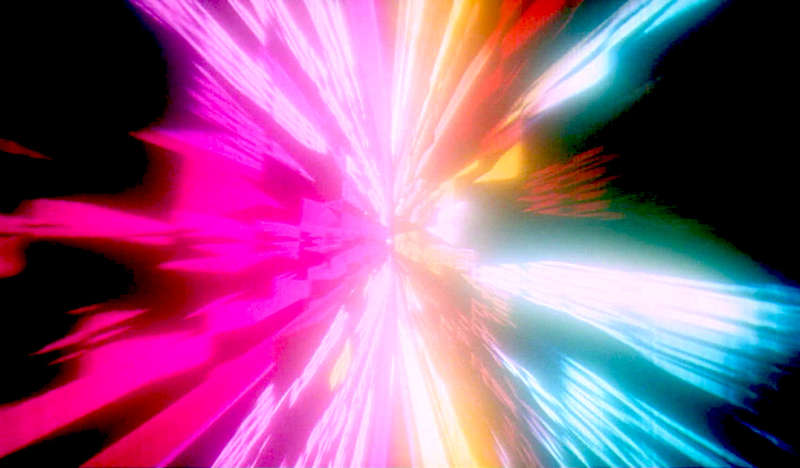 Premise: An imposing black structure provides a connection between the past and the future in this enigmatic adaptation of a short story by revered sci-fi author Arthur C. Clarke. When Dr. Dave Bowman (Keir Dullea) and other astronauts are sent on a mysterious mission, their ship’s computer system, HAL, begins to display increasingly strange behavior, leading up to a tense showdown between man and machine that results in a mind-bending trek through space and time.

Why it is a ‘Road Trip Movie’: 2001 A Space Odyssey is the ultimate trip through space and time. The film opens with the dawn of mankind, and ends with the possibilities of our species’ next evolution. The beginning of the film may be static, but the final journey spans a distance greater than any other cinematic trip on this list. The film is also an inward reflection on humanity, our successes and our flaws. Also, it spends much of its time predicting what travel might be like in the future.

O’ Brother, Where Art Thou?

Premise: Ulysses Everett McGill (George Clooney) is having difficulty adjusting to his hard-labor sentence in Mississippi. He scams his way off the chain gang with simple Delmar (Tim Blake Nelson) and maladjusted Pete (John Turturro), then the trio sets out to pursue freedom and the promise of a fortune in buried treasure. With nothing to lose and still in shackles, their hasty run takes them on an incredible journey of awesome experiences and colorful characters.

Why it is a ‘Road Trip Movie’: Fugitives on the run is a common premise for a road trip movie (see The Sugarland Express), but this one takes it to another level by combining this idea with the ultimate ancient ‘road trip’, Homer’s Odyssey. The Odyssey is a classic benchmark in both classic and modern literature as the foundation of ‘The Hero’s Journey’. Everything from Star Wars to The Matrix have used elements of the hero-building monomyth template utilized by Homer almost 3000 years ago. O’ Brother, Where Art Thou is simply a modern continuation of this trend, which happens to coincide with many trademarks we see commonly in road trip films.

Premise: The intrepid explorer Indiana Jones sets out to rescue his father, a medievalist who has vanished while searching for the Holy Grail. Following clues in the old man’s notebook, Indy arrives in Venice, where he enlists the help of a beautiful academic, but they are not the only ones who are on the trail, and some sinister old enemies soon come out of the woodwork.

Why it is a ‘Road Trip Movie’: The Indiana Jones films are all adventure films, and by definition an adventure film is about travelling to and exploring new places. Road trip films have a similar interest, although the locations tend to be closer together than what we see in Jones’ globe-spanning escapades. However, Last Crusade is also about travelling with your family and how much of a headache that can be, which is also something we see a lot of in road trip movies. It is also the Indiana Jones film with the most scenes spent driving or flying. 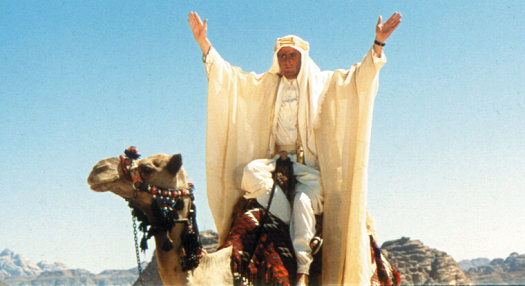 Premise: Due to his knowledge of the native Bedouin tribes, British Lieutenant T.E. Lawrence (Peter O’Toole) is sent to Arabia to find Prince Faisal (Alec Guinness) and serve as a liaison between the Arabs and the British in their fight against the Turks. With the aid of native Sherif Ali (Omar Sharif), Lawrence rebels against the orders of his superior officer and strikes out on a daring camel journey across the harsh desert to attack a well-guarded Turkish port.

Why it is a ‘Road Trip Movie’: Like Indiana Jones, Lawrence of Arabia is an adventure film, but in a more grand and historic way. A majority of the film is spent in transit, with the main characters surrounded by breathtaking desert landscapes. It is one of the most renowned classic epic films, a testament to the type of cinema which truly offered an escape to the audience –  but not from reality as films today are more accustomed to providing.

Premise: Estranged brothers Francis (Owen Wilson), Peter (Adrien Brody) and Jack (Jason Schwartzman) reunite for a train trip across India. The siblings have not spoken in over a year, ever since their father passed away. Francis is recovering from a motorcycle accident, Peter cannot cope with his wife’s pregnancy, and Jack cannot get over his ex-lover. The brothers fall into old patterns of behavior as Francis reveals the real reason for the reunion: to visit their mother in a Himalayan convent.

Why it is a ‘Road Trip Movie’: Road trip movies are often about characters who are searching for something, but they don’t know exactly what they are looking for. For this reason, they tend to travel aimlessly. For the trio of brothers in this film, they are looking to reconnect, to find joy in life again after the death of their father and the emotional/physical distances which have kept them apart. They are not exactly wandering aimlessly, but they spend the whole film travelling on a train. In close proximity to each other for a long period of time, they are forced to deal with their issues and find the answers they need to move on in their lives.

Premise: While transporting a car from Chicago to San Diego, Jim Halsey (C. Thomas Howell) picks up a hitchhiker named John Ryder (Rutger Hauer), who claims to be a serial killer. After a daring escape, Jim hopes to never see Ryder again. But when he witnesses the hitchhiker murdering an entire family, Jim pursues Ryder with the help of truck-stop waitress Nash (Jennifer Jason Leigh), pitting the rivals against each other in a deadly series of car chases and brutal murders.

Why it is a ‘Road Trip Movie’: The Hitcher is a horror movie that takes place on the road. In constant pursuit, our protagonist becomes paranoid and desperate. The road is supposed to be our escape, but it only leads to more struggle and pain. Most road trip movies tend to find out the hard way that the freedom promised by the open road is a trick. In reality, the world is an unforgiving and dangerous place. The Hitcher makes us just want to stay home.

Premise: In the not-too-distant future, Earth’s dying sun spells the end for humanity. In a last-ditch effort to save the planet, a crew of eight men and women ventures into space with a device that could revive the star. However, an accident, a grave mistake and a distress beacon from a long-lost spaceship throw the crew and its desperate mission into a tailspin.

Why it is a ‘Road Trip Movie’: Road trip movies are often about the experience of travelling towards a specific end destination. Sunshine, and similar space-faring films such as Event Horizon, Alien: Covenant, or Interstellar have a similar drive. There’s an almost romantic purpose in the journey, to save mankind. However, Sunshine focuses more on the actual journey than the destination. It focuses on the interactions of the people undertaking this journey together. It shows us how our biggest hopes could be shattered by the smallest errors, and largest egos. It shows us that no matter how far we travel, we are still flawed human beings. There’s no getting away from that.