Among other new releases, Tyler Perry’s “For Colored Girls” also had a great weekend, despite poor reviews. Last week’s horror-fest, however, is definitely over, as “Saw 3D” and “Paranormal Activity 2” took big dives in ticket sales.

The weekend’s top 10 films, including their ticket sale gross from Friday through Monday, were:

10. The Social Network $3.6 million
The Facebook movie is slowly being nudged out of theaters as new films open, but it still brings in audiences.

8. Hereafter $4.02 million
Weak word of mouth hurt Clint Eastwood’s latest directing effort. After only a month in theaters, “Hereafter” is soon headed for the great cinematic beyond: DVD. With less than $30 million taken in so far, it seems unlikely the film will make back its reported $50 million budget at the box office.

7. Jackass 3-D $5 million
After just four weeks in theaters, Johnny Knoxville’s latest has raked in over $110 million in receipts. Who’s the Jackass now?

6. Paranormal Activity 2 $7.3 million
The scary sequel is in serious free-fall, dropping nearly 60% in ticket sales from the week before. Paramount is still smiling, however, as the film made back its $3 million budget in its first 30 minutes of release, on its way to a total of $77 million in box office sales so far. 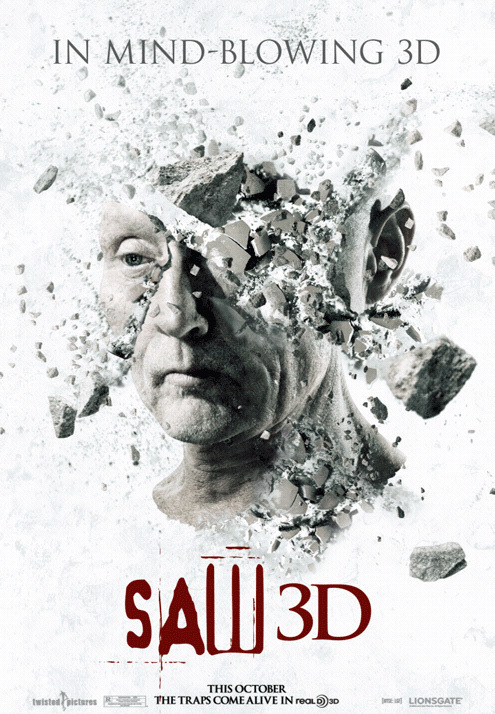 5. Saw 3D $8.2 million
I’ll never understand why studios wait to open horror movies until Halloween weekend. Last week’s #1 film dropped an incredible 64% from its opening weekend, as moviegoers no longer want to be scared, it seems. The film will still do well overall thanks to a big opening, but if local haunted houses can open in late September, why not open the film earlier to capitalize on the Halloween spirit?

4. Red $8.9 million
The Bruce Willis vehicle keeps chugging along, as audiences seem to like a film that provides laughs and action without insulting their intelligence.

3. For Colored Girls $20 million
Tyler Perry’s adaptation of the classic stage play outperformed expectations, and despite lukewarm reviews, should end up being a solid hit.

2. Due Date $33.5 million
Audiences packed in to see what they hoped was the next “Hangover.” While film-goers seemed to like it, critics were not impressed, calling the film a waste of Robert Downey Jr and Zack Galifianakis. 1. Megamind $47.6 million
The animated superhero comedy scored with audiences, and critic reviews were generally positive, but not enthusiastic. A strong cast including Will Ferrell, Brad Pitt, Jonah Hill, and Tina Fey appeals to a wide range of viewers, and a pretty good marketing campaign should keep audiences packing theaters through Thanksgiving.

The upcoming weekend has a strong slate of films headed for movie screens, including Denzel Washington’s Unstoppable, the alien invasion flick Skyline, and Morning Glory, which, for some reason, largely fails to mention that Harrison Ford stars in it. Instead, the film is promoted as a Rachel McAdams comedy. Really?