When something in the entertainment industry is popular and successful, it’s inevitable that it will have an influence on future films. For instance, the popularity of Die Hard began the ‘one-man-in-a-limited-area-battling-a-group-of-terrorists’ trend. (Under Siege/Under Siege 2, Air Force One, Speed, Toy Soldiers, Cliffhanger, Sudden Death, the Rock, Passenger 57, Con Air) Some of these movies are good, and some aren’t, but they are all examples of how Hollywood sees imitation as the sincerest form of profit.

The Christopher Nolan/Christian Bale Batman trilogy was immensely popular, highly profitable and critically well received. Therefore, it’s no surprise that the shadow cast by the franchise has swept over the film and TV industry. Writers, directors, producers and even actors have been influenced by the Nolan formula.  The question is; could this influence be ultimately detrimental to the industry? Does the method that worked so well for the Dark Knight necessarily translate properly to projects with very different protagonists? Let’s look at the ripple effect that Nolan’s blockbuster franchise has had on the entertainment world.

On the plus side, the positive critical response that the series got has helped to legitimize the super hero/comic book genre—a  category of film which has long struggled for legitimacy among critics. Finally, we had a franchise which critics couldn’t dismiss as fodder for teens and comic fans. The Dark Knight was one of the best reviewed films of 2008. Nolan proved that you can make an action blockbuster and still have depth. The Bat-trilogy raised the bar on the genre, which is a good thing.

Also, the box office bonanza that was ignited by the Nolan films has moved comic book adaptations to the forefront of the film industry. Super hero films have become all the rage, with an increased number of big-budget comic book adaptations having been produced since the Nolan films began their successful run. If the Batman films hadn’t been so profitable, would Disney have heaped so much money on its cinematic universe?

Now we look at the negatives of the Nolan influence. Let’s break it down into three categories…the Grim & Gritty factor; Batman as a DC Crutch; and the Jokerization of Villains.

1: The Grim & Gritty factor-Nolan likes dark and gritty, films and he’s good at them. Therefore, that darker style has often been imitated. However, the Nolan’s formula only works for a select few heroes—mostly the non-super-powered ones. Batman is one of them. Green Arrow (from Arrow) works well in this context. A character like Daredevil could fit into this mold. On the other hand, it doesn’t work for a character like Superman, as has been proven by Superman Returns and Man of Steel. Man of Steel did better than Superman Returns at the box office but still fell short of expectations, and the reviews were mixed as best. Despite copying the Nolan formula, neither of them approached the critical or financial success of the Batman films. Warner Bros. wants to follow the exact same pattern that made Nolan’s Batman movies such hits but does it works for other DC characters?

Why would you want to see an ultra-serious Superman film? Asking “What would it be like if Superman was real?” is a self-defeating argument. Superman is a paragon of perfection that we can only aspire to be; he has vast powers that no one will ever have; and he’s an alien from the planet Krypton. Trying to fit Superman into the Batman mold is the ultimate example of trying to squeeze a very large square a peg into a very small round hole. It leads to a movie like Superman Returns when the ultimate Superhero spends his time being a mopey super-stalker, spying on Lois with his X-Ray vision, or a film such as Man of Steel, where the inspiring nature of Superman as the reassuring protector takes a back seat to people saying “Oh my God! This scary alien might be here to kill us all!” That’s the Nolan formula’s effect on Superman. As for the character of our hero himself, Superman is not supposed to be a tormented and angst-ridden stranger in a strange land. He’s the optimistic guy who says, “Don’t worry, everything will be all right.”

With the notable exception of Batman, DC Comics has always been the company that specializes in the grand and glorious (Superman, Wonder Woman, Green Lantern, Aquaman and others), whereas Marvel is the company who is at their best with anguished characters (Spider-Man, the Hulk, the Thing, Captain America, etc.) This is why Nolan’s formula is the polar opposite of what a non-Batman DC adaptation should be.

The Man of Steel and Superman Returns gave us a Superman replete with loneliness and alienation, not inspiration. Man of Steel is possibly the most morose of all contemporary superhero movies. The Bat-films worked well because of the specific characters and the particular world they inhabit. The formula doesn’t work for characters like Superman.  Some people might make the argument that they tried to go lighter with Green Lantern and it failed, but that’s not a good argument. The failure of Green Lantern was not due to its lighter tone. It flopped because it was badly written, poorly directed and completely miscast.

Further, it isn’t just super hero adaptations which have decided to adapt the Nolan formula. Ridley Scott unwisely tried to bring realism to the fairy tale folk hero Robin Hood with his revisionist 2010 Russell Crowe clunker Robin Hood, even going as far as to make Robin responsible for the Magna Carta. Sam Mendes admits that he was strongly inspired by Nolan when he made the 50th anniversary Bond film Skyfall. There was a brooding, macabre new version of Snow White called Snow White and the Huntsman. The list goes on and on.  Clearly, Nolan’s dark, gritty realism formula has spread faster than the plague at the end of Rise of the Planet of the Apes, but is it doing damage to the movie and TV industry?

2: Batman as a crutch for DC-Because of the success of the Nolan films, DC is willing to gamble on almost anything Batman related, but they seem reluctant to explore the DC universe beyond numerous variations of Batman. The Caped Crusader has become their safety net. For instance, when Man of Steel failed to be the mega-hit Warner wanted it to be, they said, “Just add Batman and the sequel will be a huge hit”. They are reluctant to take a chance on Wonder Woman, Captain Marvel, the Flash or other DC heroes but we’ve had a plethora of Batmen (Keaton, Kilmer, Clooney, Bale and now Affleck). In animation, almost all the DC TV series in recent years have included Batman, such as Batman: the Brave & the Bold, Young Justice, Teen Titans Go! and Beware the Batman. DC animated films since 2012 include Dark Knight Returns parts 1 & 2, several Justice League films (with Batman) and the upcoming projects Son of Batman and Batman: Assault on Gotham. At least there are some non-bat TV projects in the works, aside from Arrow, although there is also a Gotham series on the horizon. It’s quite frankly gotten to the point where DC is Linus and Batman is the security blanket they’re afraid to let go of.

3: The Jokerization of villains: I’ll admit that Heath Ledger exceeded most expectations of him and gave a dazzling performance as Batman’s arch nemesis the Joker. He posthumously won an Oscar for his performance. That’s all terrific. But just because his malevolent nutcase act worked well in this context, that doesn’t mean that other, very different bad guys have to bring the crazy.

It’s hard not to notice similarities between the Joker and recent revisions of iconic bad guys like Professor Moriarty and the Master. Moriarty, played by Andrew Scott in the BBC’s Sherlock, is the Joker in both the writing and the performance. The plot of the Sherlock story arc has Moriarty causing mass chaos just to get Sherlock’s attention. This Moriarty is obsessed with Sherlock. He seeks Holmes out jut for the sake of toying with him, and believes his life would be empty without Sherlock to vie with. It was just like Heath Ledger’s line in The Dark Knight, “I don’t want to kill you. What would I do without you?” Performance-wise, Andrew Scott’s over-the-top performance is so flamboyance, he should win the Jim Carrey out-of-control award. His technique of going from mirthful to menacing in the same sentence is copied from Ledger.

Another example of a Jokerized villain is the Master from Doctor Who, played by John Simm (Who I normally like.) His hammy performance in the End of Time is utterly unbound. He bounces around like he’s possessed by the spirit of a Loony Toons character on speed.  Reinterpretation is one thing, but taking a character who has always been a cool mastermind and turning him into Jerry Lewis shows that the influence of the Nolan/Ledger Joker has become too prevalent in the minds of modern TV and filmmakers. It’s strange that some people will cheer the departure from the excesses of the old ‘corny’ Batman TV villains but simultaneously applaud such cartoonish caricatures of over-the-top bad guys like Scott’s Moriarty and Simm’s Master.

*(For clarification to those who are unclear, my comments on John Simm’s Master are not meant to apply to his 2007 performance in “Last of the Time Lords” which was more inspired by Jim Carrey’s Riddler; but rather to the “End of Time” where he changed his performance to emulate the Joker.)

Ultimately, there’s no clear ‘yes’ or ‘no’ answer to this question because a case could be made either way. Fans of the series will no doubt say that anything resulting from Nolan can never be a bad thing, whereas critics of Nolan’s Bat trilogy will question whether the fallout from his bat blockbusters is worth what we got from a mere three films. 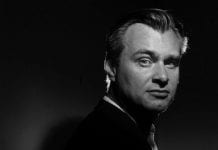