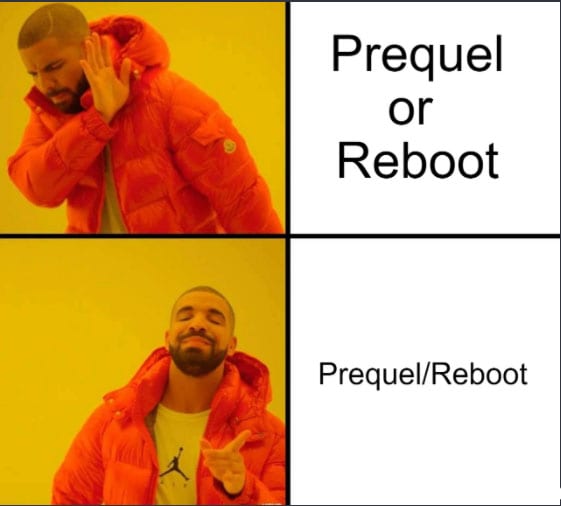 Reboots don’t always fare well. Neither do prequels. But for some reason reboots that also happen to be prequels have worked out very well. We examine 5 of the best examples and see why they are successful.

Reboots have a bad reputation. It’s an example of Hollywood trying to recapture past success for the sake of exploiting an existing fanbase for an easy buck. It’s purely a business decision, and not at all concerned with maintaining the artistic integrity of the franchise/original film. Prequels have a similar reputation. Unsurprisingly, the track record of both of these types of films is lacking, to say the least. Fans aren’t going to appreciate it when you tread over their favorite films for the sake of greed.

But I’m here to tell you that prequels and reboots CAN work. That is, as long as the film is both a prequel and a reboot at the same time. Hollywood has made a few of these over the past couple decades, and they have found resounding success when handled correctly. These films have not only reinvigorated a franchise, but done so in a way that both allows the studios to keep making more sequels without encroaching on the success of the original films. In other words, they found a way to keep both fans and studio executives happy. They are the cinematic equivalent of a win-win.

Below I have outlined 5 of the most successful examples of this type of hybrid film, and explain what makes them work so well.

Premise: Will Rodman (James Franco), a scientist in San Francisco, is experimenting with a drug that he hopes will cure his father’s (John Lithgow) Alzheimer’s disease. After his work is deemed a failure, Will becomes the guardian of Caesar, an infant chimp who was exposed in-utero to Will’s drug. Caesar displays unusual intelligence, and Will decides to continue his experiments secretly. But as Caesar’s intellect and abilities grow, he comes to represent a threat to man’s dominion over Earth.

Why It Works: The original Planet of the Apes film is heralded as one of the greatest science fiction films ever made. In 2001, Tim Burton attempted a remake, to disastrous results. The problem is that the original film, while thought-provoking, is somewhat campy by today’s standards. Burton’s attempt to simply update the style for a new generation of audiences didn’t fully grasp the philosophical backbone of the original. The Rupert Wyatt remake/reboot works well because not only does it augment the interesting ideas brought up in the original film, it reinvigorates the look of the franchise for the 21st century.

Secondly, the film’s story both diverges and remains consistent in the timeline of the original film. What that means is that it is possible for this film to be a prequel to the original, but it also works as a standalone and reboot for its own trilogy. It kind of left it up to fans to decide if they wanted to accommodate the reboot as a prequel or not. Even though the original film supposedly takes place thousands of years in the future, it is still technically possible for this version of the film to accurately depict the genesis of the ape’s rise to power. Premise: Aboard the USS Enterprise, the most-sophisticated starship ever built, a novice crew embarks on its maiden voyage. Their path takes them on a collision course with Nero (Eric Bana), a Romulan commander whose mission of vengeance threatens all mankind. If humanity would survive, a rebellious young officer named James T. Kirk (Chris Pine) and a coolly logical Vulcan named Spock (Zachary Quinto) must move beyond their rivalry and find a way to defeat Nero before it is too late.

Why It Works: The Star Trek franchise is among the most popular franchises in pop culture, probably only second to Star Wars. However, the franchise fell on hard times during the 2000’s after it failed to find much success with its 90’s television programs in theaters. Suddenly it found itself in a Catch 22 amidst a resurgence in the popularity of science fiction. The franchise could either continue doing what it had been doing and try to appeal to its loyal fans but not necessarily grow them in number, or else try something new and different to try and grow the fan base.

The 2009 film Star Trek managed to do both at the same time. Thanks to a brilliant story where the film creates an alternate timeline, it found a way to both revisit the glory days of the franchise while also having the freedom to make changes to modernize it. The script smartly walked the very fine line between keeping it recognizable as Star Trek while bringing it into the realm of 21st century science fiction. Most importantly, the alternate timeline allows the events that took place in all of the other Star Trek television shows to remain. In other words, they created a reboot without having to tread on the legacy and canon of the franchise. Even if traditional Star Trek fans aren’t a fan of the reboot or its sequels, they can at least appreciate the careful planning that went into it so as to ensure the integrity of the franchise is maintained. Premise: In the early 1960s, during the height of the Cold War, a mutant named Charles Xavier (James McAvoy) meets a fellow mutant named Erik Lehnsherr (Michael Fassbender). Despite their vastly different backgrounds — Charles grew up with a wealthy family, while Erik lost his parents at Auschwitz — the two become close friends. As the world teeters on the brink of a nuclear war, Charles and Erik with other mutants join forces to save humanity. However, a situation soon tears the friends apart.

Why It Works: The X-Men franchise is interesting because of its film status before the advent of the MCU, despite being Marvel in the first place. That makes the original X-Men films a precursor to the modern superhero franchise tentpole. After the lackluster reception of X-Men: The Last Stand it was clear that another sequel wouldn’t work. Then they tried a standard prequel with X-Men Origins: Wolverine. That didn’t work either. That left the franchise with only one option: a reboot.

In order to compete with the MCU and crank out action-oriented sequels, they would need a young cast, which meant the film would have to take place in the past. Hence, it became a reboot/prequel. It would have been easy to select different characters for an X-Men reboot, but the characters in the original films became so iconic that the studio would have been foolish to try and abandon them in order for the franchise to try and keep afloat. Instead, seeing the formation of the X-Men and the genesis of these great characters creates the drive of the new film for fans of the old films/franchise. But as a prequel/reboot it also works as a solid introduction if you aren’t familiar with the X-Men in the first place. Premise: A young Bruce Wayne (Christian Bale) travels to the Far East, where he’s trained in the martial arts by Henri Ducard (Liam Neeson), a member of the mysterious League of Shadows. When Ducard reveals the League’s true purpose — the complete destruction of Gotham City — Wayne returns to Gotham intent on cleaning up the city without resorting to murder. With the help of Alfred (Michael Caine), his loyal butler, and Lucius Fox (Morgan Freeman), a tech expert at Wayne Enterprises, Batman is born.

Why It Works: Thanks to the campy 50’s television show and 60’s movie, Batman had unfortunately earned a reputation as being a sillier entertainment entity for mainstream film audiences. Burton’s 90’s Batman films tried to reinvent the caped crusader for the blockbuster era, but they still exuded a certain childish charm which may have put off more mature audiences (further compounded by the downright goofy sequels). Nolan’s Batman Begins invented a more serious superhero movie, something (along with Raimi’s Spider-Man trilogy) that would soon ignite the entire industry.

So what makes this reboot/prequel successful is how the filmmakers used this opportunity to change the tone of what the franchise could be. It made it clear that it was not directly associated with any previous Batman property, which then gave the filmmakers more freedom to tell the story in a more realistic fashion. Doing so certainly encroaches on the character’s legacy on film and in print, but the increasing popularity of darker Batman properties such as graphic novels and animated films made it apparent that fans would welcome a darker take. Nolan’s Batman Begins also found itself hitting the big screen at a time when audiences were looking for more serious, darker stories. This is an example of a filmmaker reading the room, and adapting an existing property to suit. Premise: After receiving a license to kill, British Secret Service agent James Bond (Daniel Craig) heads to Madagascar, where he uncovers a link to Le Chiffre (Mads Mikkelsen), a man who finances terrorist organizations. Learning that Le Chiffre plans to raise money in a high-stakes poker game, MI6 sends Bond to play against him, gambling that their newest “00” operative will topple the man’s organization.

Why It Works: James Bond is among the longest-running film franchises in existence. During that time it has certainly had its ups and downs. But in the past, any concerns with the drop-off in quality of James Bond films seemed to be cured by bringing in a new actor to portray James Bond. When Pierce Brosnan’s turn as Bond started to falter in the late 90’s, the studio gave him one last hurrah in the CGI-spectacle that was Die Another Day – an attempt to match the machismo action movies of the day. But doing so brought unwelcomed existential questions to the franchise, and it soon became clear that just recasting the lead character to someone younger and carrying on as if nothing happened would not work as it had in the past.

Casino Royale found a way to reinvent the character for the 21st Century. Instead of making him the invincible superhero, it made him bleed. Instead of just chasing around women for a good time, it made him fall in love. These tweaks required the franchise to take a step back and reevaluate what it wanted to be. In doing so, the only way forward that made sense was as a prequel – going back to the beginning of Bond’s tenure and defining the moment that made him who he was. By going back to the beginning with a new actor portraying the character in a manner that is different than what we had seen so far, this also made it a reboot. In this case, the new Bond film couldn’t have worked as either a reboot or as a prequel – it had to be both.