So apparently, the beginning of September is too good for movies.  September 7, the first Friday of the month, has zero releases set for theaters.  Well I wouldn’t be surprised if this spot is eventually filled sometime in 2012, for now, we’ll just have to skip this weekend.  So moving on to September 14, we first have Argo opening, the new film directed by and starring Ben Affleck. This one has a fun premise, in which a group of CIA operatives concoct a plan to free six Americans during the Iranian revolution, all under the guise of a film crew scouting for locations.  It’s a true story that could be a lot of fun on film, and I’ve generally liked the directorial efforts of Ben Affleck.  Add a stellar supporting cast of such greats as Bryan Cranston, John Goodman, and Kyle Chandler, and you have a great recipe for success.

Also opening the 14 is the next Resident Evil movie, Resident Evil 5. This is the fifth in one of the least memorable franchises currently still running.  Actually, I’m surprised its still going on this long.  I guess they make an okay amount of money at the box office, but they’re so unremakable that it’s easy to forget they exist.  Which is perfect for September, because September always seems kind of unremarkable.  But this year, September is actually quite good.  It seems like this film is just another waste of time and space.  Finally, we have Finding Nemo, the second 3D post conversion of the year coming from Disney.  Which is cool, I guess; Finding Nemo will probably look pretty good in 3D.

Now we move on to the 21st of September.  Opening this week is Dredd, the adaptation of the British comic book Judge Dredd. Some of you may know of the property from the 1995 film of the same name starring Sylvester Stallone.  That movie was terrible, but Dredd is promising something better.  With Carl Urban set as the titular judge, hopefully that’s exactly what we will get.  Still, the director, Pete Travis, isn’t the most promising one; his last film was the action mess, Vantage Point. I guess we’ll have to wait and see if this is an improvement.

Also opening the 21st is Hotel Transylvania, an animated comedy which is also suffering from ParaNorman syndrome; its a film about legendary monsters such as Dracula and Frankenstein, but is about five weeks shy of Halloween.  Seriously, is there a taboo about releasing films like this closer to Halloween?  Anyways, the voice cast and plot would usually turn me off this film (Dracula, voiced by Adam Sandler, runs a resort for some reason), but the director interests me.  Genndy Tartakovsky, the creator of such great cartoons as Samurai Jack, Dexter’s Laboratory, and the original Star Wars: Clone Wars, is very creative, and could make this film a lot of fun.  But I don’t know…the plot just turns me off.

September 28 has two movies that I’m super excited for opening up.  Of the two, I’m certainly looking forward to Looper more.  Well I wasn’t head over heels in love with director Rian Johnson’s previous films, Brick and The Brothers Bloom, this movie has both an excellent premise and an excellent cast.  Starring Joseph Gordon Levitt and Bruce Willis, Looper is about a mob hitman of the future who goes forward in time to complete his hits.  Things get complicated, however, when his next hit is revealed to be himself…in the future.  Yeah, it sounds complicated, but nothing’s better than an intricate, time travel action film.  I can’t wait to see this film.

I’m looking forward to the other one, but not as much.  It’s the newest Oliver Stone film, Savages. His last project was Wall Street 2: Money Never Sleeps from 2011, but I hardly even remember what happened in that film (nor the fact that it came out only a year ago!).  But Savages sounds pretty cool.  Two pot growers, played by Aaron Johnson and Taylor Kitsch, get into a face off with the Mexican drug cartel when they kidnap their…err, “joint” girlfriend.  It doesn’t really sound like typical Oliver Stone, but the premise is cool enough to get me interested. More Tim Burton antics await us as October 2012 begins.  His second film of the year, following May’s Dark Shadows, is Frankenweenie. Frankenweenie is based off of one of Tim Burton’s first ever short films from way back in 1984.  It’s the story of a boy who tries to bring back his dead dog, and faces horrific consequences for it.  Unlike some of the other films this year, Frankenweenie has an appropriate release date of October.  And unlike most of Tim Burton’s films, this one does NOT have Johnny Depp in it; instead, he exchanges him for Winona Ryder and Catherine O’Hara.  It’s also in black and white and stop motion animation, which at least makes it look more interesting.

Fighting Frankenweenie at the box office is Taken 2, the sequel to 2009’s very popular Taken. Returning to the franchise is both Liam Neeson and Maggie Grace. The promise of Liam Neeson kicking more French ass was promising enough for me to already be interested in the film (despite the fact that it’s completely unnecessary).  But then the rumored plot was released, and it ruins everything!  Liam Neeson is going to be taken hostage with his wife, and freaking Maggie Grace has to save them!  What the hell?!  The Taken becomes the Savior?  And freaking Maggie Grace is doing it?  NO! Liam Neeson better break free 20 minutes in, or this movie is going to be super disappointing.  The final film releasing October 5 is Leatherface, which is another Texas Chainsaw Massacre film.  Once again, I’m not much of a horror movie guy.  So this is another skip for me. 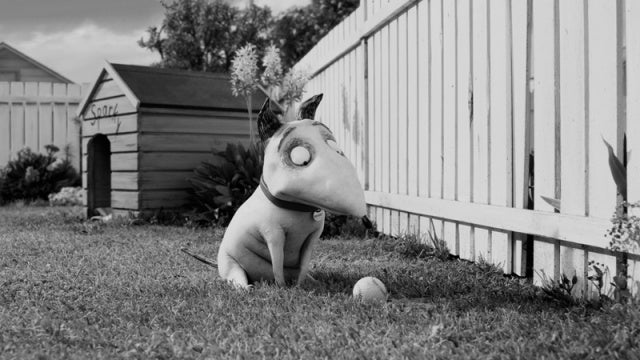 October 12 is a disappointing week, considering how good the last few had been.  The two movies opening both seem pretty mediocre, and have nothing really to support themselves on.  First off, let’s talk about Here Comes the Boom. That one’s a comedy about a high school biology teacher who decides to moonlight as a mixed martial artist during nights to raise money for his school’s music program.  This isn’t a bad premise (and it may be mocking this year’s Warrior), but then I see the cast and director.  Starring as the teacher is Kevin James and the director is the man who brought us this year’s Zookeeper. Yup, that turned me off the whole idea.  I can already imagine all the fat jokes that are to come!

Also opening is Parker, a pretty generic sounding crime thriller.  And who exactly is set to star in it?  King of generic himself, Jason Statham. The film is about a thief.  Oh, but he’s NOT JUST an ordinary thief!  No, he’s a thief who refuses to steal money from people who need it!  So, basically, it’s about a thief who only steals from the rich.  Which sounds exactly like Robin Hood…except this dude doesn’t give to the poor.  He keeps it all for himself.  Which BASICALLY makes him a gigantic asshole.   What a protagonist, huh?

The Big Wedding is one of the heavy hitters on October 19.  Starring Robert De Niro, Robin Williams, Diane Keaton, and many more, The Wedding tells the story of a long divorced couple who, for one reason or another, decide to pretend they are still married.  Man, I wonder if the pair will eventually fall in love again at the end of the film!  Judging how its from the director who brought us The Bucket List, Justin Zackham, I would gander the answer to that question is yes.

But the real big release on October 19 (and maybe October in general) is Zombieland director’s dramatic debut, Gangster Squad. This film has had a very long history in Hollywood, and has circulated through many directors.  Featuring a fantastic, all star cast comprised of Sean Penn, Ryan Gosling, Emma Stone, Josh Brolin, and more, Gangster Squad could be a very interesting and fun gangster movie.  And I generally like Ruben Fleischer, even though 30 Minutes or Less was a bit of a disappointment.  But that cast!  How could you possibly beat that?

The last two films of October 2012 (and Part Five of this guide) are pretty pathetic and not very interesting.  Which means that October pretty much ends with a whimper, and not a bang.  First up is Halloween III (or just Halloween, as its listed everywhere else).  Even though I’d usually say that I don’t care about horror movies at all and thus don’t care about this movie, I couldn’t even tell you if I did.  Because, there is almost literally NOTHING to work on with this film.

Not a cast, or a plot.  There’s a director, Patrick Lussier (who brought us Drive Angry and My Bloody Valentine) and a writer, Todd Farmer, who also WROTE those two films.  But that’s it.  I would say that this film would probably be pushed back but, honestly, even though no one’s attached to this project, it could still hit its October release date.  Horror films typically don’t take that long to film.  Finally, we have Of Men and Mavericks. It’s about surfing.  Stars Gerard Butler and Elisabeth Shue. And is directed by Curtis Hanson, of L.A. Confidential fame.  But still…it’s about surfing.  So I really don’t care.

Well, that does it for Part Five.  Check in LATER TODAY for Part Five, in which we talk Skyfall, Hobbit, and much more.  See you then!