In order to mitigate the stress, strain, and overall work it would take to compile a decent list of the 5 worst superhero of all time, certain parameters have been established in which to limit this week’s listing. First, as the title should make obvious, we’re going to limit the criteria to those films released within the last 10 years (that’s right – from June 21, 2001 to today). Furthermore, we’re going to be limiting our query to films based on pre-established superhero characters, thereby eliminating Sharkboy & Lavagirl, Uma Thurman being a Super Ex-Girlfriend (ugh), and the children in attendance at Sky High. That little caveat also serves to expunge 2004’s Catwoman from our inquiry, as that film is not based on any pre-existing character of whom I’ve ever heard.

Blind attorney Matt Murdock, garbed in the motorcycle jacket he tore off of some deranged transvestite biker and a headpiece from a S & M production of “Phantom of the Opera,” rights wrongs while setting pool tables on fire and sleeping in jacuzzis with big heavy lids on top. Due to the accident that blinded him as a child, Murdock’s remaining four senses have been heightened beyond all natural limits. Being able to hear pretty good, of course, allows him to jump 30 feet in the air while wearing 50 pounds of leather (and, presumably lighting more pool tables on fire). His love interest, on the other hand, has been practicing using her sai against sandbags while jamming to Evanescence, so yeah, she’s pretty good. Things really get going when Kingpin, a cigar-chomping, neck-snapping legitimate businessman hires the deadliest man in the world, an Irish assassin who wears a beanie during the summer and has a leather fetish rivaling even Daredevil’s, to murder a crippled old Greek criminal who, after 50 years of being a ruthless psychopath, has decided that killing is wrong. There’s also flaming pool tables! But, that’s not all. If you watch the Director’s Cut, it’s got Coolio in it! You remember him? Gangster’s Paradise? 1995? Can you believe they got him? How did Tom Bergeron and Celebrity Squares let that guy slip through their fingers? 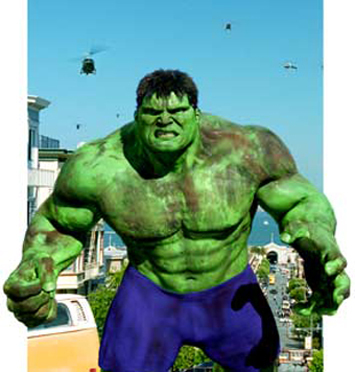 They say this movie’s called “Hulk,” but I’m not so sure that’s apt. To be honest, I don’t remember him being in this movie. Do you? I mean, I remember Eric Bana being super whiny because he just had to be dating Jennifer Connelly. Sheez … what a drag. I can imagine how that might get ya down. I remember the part where a crazed homeless man gained the astounding ability to make his shoe turn into a metal grate (and his hand turned into part of a table, which was similarly neato). There was that big green poodle that was, I dunno, pretty weird. Then there was the end where said crazed homeless grate-shoe man turned into a big light explosion like the end of every Japanese RPG ever made. Aaaand … that’s about it. Was the Hulk actually in this at all? Either way, this movie was doo doo. 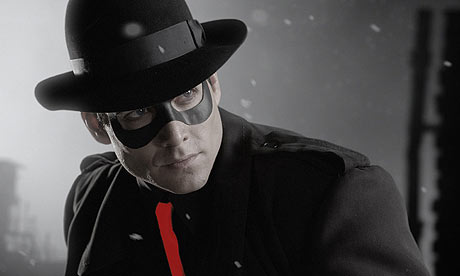 Woo boy, did you guys see this one? Odds are you didn’t (its worldwide box office gross was thirty-eight dollars). Let me tell you, you guys are missing out on one crazy piece of business right there. Okay, so it’s shot entirely like Sin City. Why? I dunno, because it’s cool. Because Frank Miller thought he could direct after Robert Rodriguez let him come “co-direct” on the set of Sin City during Bring Your Daughter to Work Day. Word is, all the while Frank Miller was sitting in an glittery, over-sized director’s chair, swinging his legs, giddily singing with bright, glimmering eyes, “I’m helping! I’m helping!” throughout the entire shoot. Anyways, that’s not the point. The point is it has Samuel L. Jackson lifting a toilet over his head and using it to bludgeon someone while while screaming, “Toilets are always funny!” The point is it has a melting cat in it. The point is it has a character that is comprised only of a foot with a small head attached to the top. That, my friends, is the point.

Jeez, this movie’s title has more colons in it than a gastronomy text book. If only it was as entertaining. And, like a colon, it’s sole purpose seems to be to produce feces. Look at what it did to Deadpool. Feces. Gambit? Stool. Sabretooth? Excrement. You get the picture (and if not, refer to the aforementioned gastronomy text book for more explicit pictures). It’s ironic that the movie titled “Wolverine” had the least to say about his character. X-Men: First Class did more in ten seconds to demonstrate the qualities that have made Wolverine one of the most popular characters in history than this movie could do in hours. It’s emotionless, brainless, and ultimately pointless (just like Wolverine’s horribly rendered CG claws). 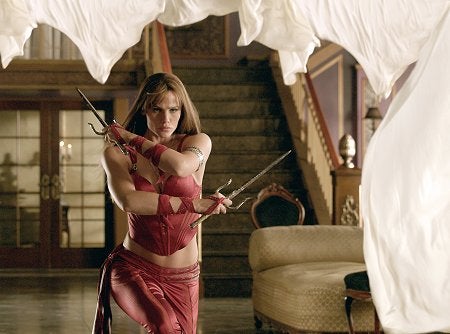 So, this movie ends with Elektra throwing a sai one hundred thousand feet from the center of a hedge maze into the throat of a woman with the power to make healthy plant-life turn brown after she’s thrown the primary antagonist (whose only real weapon appears to be the art of throwing freshly laundered bedsheets in people’s faces) down a well in the center of the hedge maze because he was a half demon / half ninja who killed Elektra’s mother for no apparent reason, but Elektra never knew about that until she had a vision while staring into a fire (and, presumably, blazing up a few) which allowed her to communicate to Bedsheet Man from the other side of the world. Also, General Zod is her mentor, Stick. Also I hate this movie.