With all the recent news that has flooded our inboxes regarding the future of the David O. Russell directed Uncharted movie, we had to ask: What about all those other awesome films-based-on-video-games we’ve heard about?  Well, we demanded answers so we went hunting for the current details on ten adaptations we hope will see release in our lifetimes. The blockbuster video game franchise birthed by the combined efforts of Bungie and Microsoft has dominated the video game market for the better part of 10 years and the film adaptation has dominated the rumor mill almost as long.  Current information has it that a release date of sometime in 2012 is presumed utilizing a screenplay by Alex Garland (28 Days Later, Sunshine, The Beach) and revised by D.B. Weiss (Game of Thrones).  There is currently no slated producer, director, or production company behind the film.  As of now, Halo is in development hell, with Frank O’Connor at Microsoft stating that they are, “…looking at the numbers…as a feature film changes the landscape of Halo entirely”. The current news available on the long-awaited Gears of War film is that New Line Cinema, a division of Warner Bros., currently holds the adaptation rights and that the film is currently in development.  With no cast information and no director announced, it’s difficult to see this film reaching its 2012 release date.  Fortunately, it has been stated that the people in charge are doing their best to avoid casting a slew of former WWE stars as Marcus Fenix and his COG cohorts.  One can only hope.

A huge game that made massive waves upon release, a film adaptation of Take Two’s Bioshock is also eagerly anticipated.  Currently attached to produce is Pirates of the Caribbean’s director Gore Verbinski and set to direct is Juan Carlos Fresnadillo and Braden Lynch.  While Verbinksi has stated that the film is still in production, the attempts to secure a hard “R” rating has begun to seriously damage the film’s future with studios backing away slowly.  Fortunately with Verbinski behind the wheel, I feel there may be a future for the denizens of Rapture. 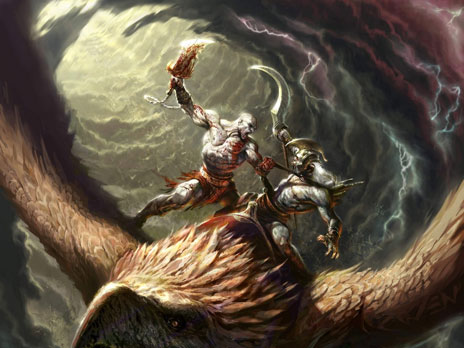 David Jaffe, the mind behind the epic reign of brutal carnage that Kratos, the Ghost of Sparta, brought down upon the Gods of Olympus through an entire trilogy on the PS3, has outwardly stated that the film adaptation (originally announced back in 2005) was being handled by Universal Studios.  However, considering the lack of information coming out of Universal, Jaffe doubts the film will ever be released.

Undoubtedly one of the most terrifying survival horror games to come out of Japan, Fatal Frame could easily make one of the most terrifying films every made, if the right minds were behind it.  And it looks like they are.  While no cast or director have been announced, the film is currently being produced by Dreamworks.  But considering the lack of information in some time, it is most likely on hold until the right people (namely Spielberg) can nail down a script or finish other, more pressing projects.  I wouldn’t expect to see Fatal Frame for some time.

A rather lackluster shooter, Lost Planet has the makings of  a decent film that could spawn a franchise if the first takes off.  It could also become one of those Direct-to-DVD franchises.  Producer Avi Arad has stated that the screenplay by David Hayter (X-Men, Watchmen) is “coming along” and that the film is currently being budgeted at about $150 – $200 million.  However, a bit of time has passed since the last updates so most likely, due to the critical failure of Lost Planet 2, the hype has died down and the film has been shelved for the time being.

As the creator of the leading global online game, Blizzard Entertainment is heavily involved in the creative aspects of the film and that is the suspected reason behind the slow movement behind the epic picture.  Currently titled Warcraft and set for a tentative 2013 release, I anticipate that the film will actually be released by the Blizzard bylaw of “When It’s Done”.  Sam Raimi is still attached to direct the epic CGI/Live Action film that will supposedly chronicle the events one year before World of Warcraft.  Chris Metzen, a lead designer at Blizzard and Co-Producer of the film has stated, “the film will be told from the primary perspective of the Alliance with the Horde characters showing up at specific intervals, and that Arthas, the Lich King, is unlikely to appear.”

The incredible success of the Splinter Cell franchise since the release of the original game on the XBOX back in 2001, almost assured it a film adaptation.  Currently the film has a tentative release year of 2013.  Tom Clancy is said to be an executive producer but the writer has yet to confirm this and voice actor/actor David Baron is said to be cast in the film.  Very little is currently known about this film so a 2013 release date is quite plausible, but I wouldn’t expect to see much movement as a director, producer, and script have yet to be announced.

The stealth and espionage epic created by Hideo Kojima has been a pinnacle of success in all of video game history.  The story of spy Solid Snake and his efforts to contain and destroy the nuclear weapon Metal Gear is well known around the world and a film adaptation is said to be awaiting a 2012 or 2013 release.  However, according to David Hayter, the voice of Solid Snake, talks are continuously slowed or broken down by creator Hideo Kojima and Sony over copyright issues or other creative aspects of the film.  But if Kojima and Sony continue their successful release streak of MGS games, they’ll always have the hype to springboard a film.  It’s just a matter of time.

The adaptation of the run-and-gun video game series starring a loveable, wise-cracking Earthworm in control of a sweet power suit supposedly will see release sometime this year.  Currently the only thing known is that the film is helmed by director Douglas TenNaple, a staple in the Nickelodeon Animation block.  This information would also seem to confirm rumors that the film will be animated, most likely total CGI.

Despite the deluge of bad news that seems to follow many of these projects, many of them will one day see the light of day.  As studios clambor for a dollar, you can rest assured that these long-held licenses will see the light of day to capitalize either on the nostalgia or current hype.  But the real question will always be: Will we eventually see the big budget epics that we hope for, or will they ultimately find us sitting on the couch watching a SyFy Channel premier?

‘Re:ZERO-Starting Life in Another World: The Prophecy of the Throne’ Launches...