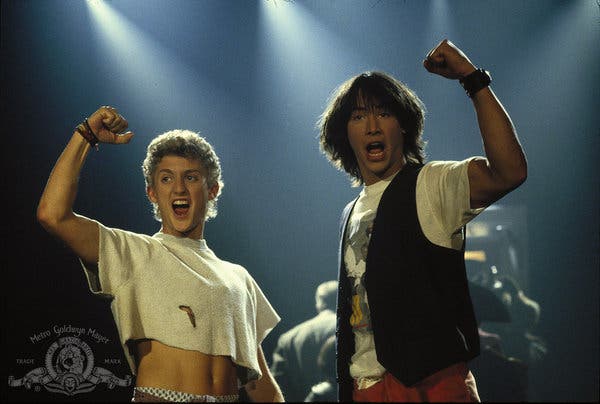 From a former college football star working as an undercover FBI agent, to a former college football star who gets a second chance in the professional league thanks to a player strike, Keanu Reeves had portrayed a wide range of characters in his prolific career as an actor. But as a John, another John, still another John, Johnny, Jonathan, or Jack which performances are his best?

Keanu Reeves has been a professional actor in feature films for thirty-five years. During that time he has had roles in more than 72 productions, thus averaging about 2 per year. His credits include parts in period dramas and thrillers, teen romances, science fiction, martial arts action flicks, supernatural, horror, and action blockbusters. While the Academy Awards has yet to recognize his efforts, Reeves has won three MTV Movie Awards, been nominated for two Saturn Awards, two people’s choice awards, and has a star on the Hollywood walk of fame.

Reeves has seen his share of hits and misses over the years. Particularly in dramatic roles he has not found very much success, in contrast to his work in the action genre which is what he is most associated with. I would say there are very few actors who have had as much disparity in success as Reeves in action and non-action roles despite starring in many more non-action movies than action movies. Action movie icons such as Jason Statham, Vin Diesel, or Bruce Willis have dabbled in dramatic or comedy roles, but done so at a much more infrequent rate than Keanu. Keanu’s choice for projects seems to be less driven by perceived success, and more driven by the people and talent he wants to work with.

The charm of Keanu’s acting is also knowing the actor himself. Keanu may be an introvert, but he has also demonstrated his generous and personable nature. His calm and peaceful demeanor often contrasts the types of characters he portrays on screen. In interviews he often makes insightful and inspiring comments, and provides helpful philosophical context. And so I believe Keanu’s best work as an actor is the work which parallels his exploration of the universe in real life. His best roles are the ones which allows him to deliver helpful truths to the audience, or at least open their minds to the potential of the universe in which they inhabit. Not everyone will take the same approach, but here is how I would rank Keanu Reeve’s most awesome roles (franchises only count as one role)… In Toy Story 4, Reeves voices a Canadian daredevil toy, modeled after Evil Knievel. Besides The Animatrix and A Scanner Darkley, I believe this is Reeve’s first voice work role in a traditional animated film (which feels like a huge wasted opportunity). Kaboom has a tragic backstory in that his previous owner was disappointed in him because he couldn’t complete the stunt shown in his commercial. As such, he kind of has this wounded ego and tries to make up for it by acting tough and extroverted. But Reeves is a perfect match for the role not just because he is Canadian and owns his own motorcycle company (which happen to be purely coincidental with his casting), but because Reeve’s energy and enthusiasm makes the role stand out. Kaboom plays an important role in the film, and Reeve’s helps to tell an important lesson while also being very fun to watch. Young Keanu Reeves is often associated with his performance in Bill & Ted’s Excellent Adventure, and maybe his performance in this film is an off-shoot of that one. In this film, he plays Tod, the adrenaline junky boyfriend of the main character’s daughter. Reeves is in this film for a total of 5 minutes, but it is in those five minutes he makes a huge impression. Tod is not perfect, and seems to be less-than-ideal husband material, but he is the only one who can talk to his girlfriend’s teenage brother about his insecurities after the death of his father. Tod shows us that you shouldn’t judge people by their appearance and I can’t think of a better person to deliver that message than Keanu Reeves.

Keanu Reeves often plays doctors, scientists, or, in this case, an architect. They are sensible roles, but often find themselves in crazy situations. This film uses unassuming Keanu Reeves and places him in chaos. What makes this role memorable is that Reeves is fully committed. At first it contracts his behavior, what the audience may identify as normal, with that of his hypersexualized assailants. We feel uncomfortable for him, and that’s exactly the feeling the film wants. Later, he cracks, and it becomes fascinating watching him explode. It has Nicholas Cage-gone-crazy undertones, but for a shocking horror movie, that’s what you need. This isn’t trying to be realistic, it’s a fantasy turned into a nightmare. I realize this is not a great example of a martial arts movie, and is yet another failure in the attempt to create a worthy hybrid of western and eastern cinema. But you can’t deny how well Keanu fits into this role, and you wonder why it took so long for him to show up in a purely martial arts film. Keanu’s (well-documented) interest in martial arts films goes so far that he actually directed one (his only credit as director). Keanu is more impactful in this film as an actor/character than in his directorial debut, and as a representation of what he does really well on screen, I thought it deserved a spot in my top ten.

This film is all about the visuals, and Keanu as an actor fits well into that approach. Like many of his other later roles, he is slick. Even when he is beaten to a pulp, he somehow exudes this beautiful cinematic sparkle which is difficult to ignore. Keanu assigns an importance to the culture and the rituals behind the action, and is able to provide recognition to them while speaking few words. This is a role where the actor is working in his element, and his respect for the influences of the genre show through.