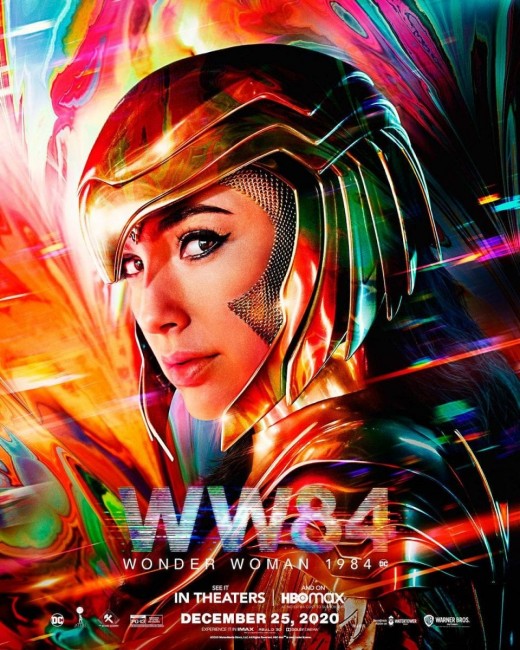 Though it might be releasing a bit later (and differently) than expected, Wonder Woman 1984 makes for an incredible Christmas present that delivers hope and good feelings all around. Check out our full review of DC’s latest release!

It’s been a while since we’ve seen Diana Prince back in action (with 2017’s Justice League), but her follow-up solo adventure has been worth the wait. Despite a handful of delays, the superheroine is back for an all new adventure that manages to deliver big comic book action, while grounding it all with a lot of heart.

For the most part, like all my reviews, I’ll be veering away from spoilers. That said, there are a couple things not really shown in the trailers I have to discuss if only because there doesn’t seem to be any way around it! I’ll be keeping spoilers to the bare minimum, so I wouldn’t fret too much.

As the title implies, Wonder Woman 1984, picks up Diana’s story several decades from the previous film. Here, we’ve gone beyond the first World War and enter the bombastic 80s era. Diana is no longer the fish out of water, and seems wise in the ways of the “modern” world. While she still works hard to save the day as Wonder Woman, albeit with MUCH more anonymity and discretion, Diana has settled into the “world of man.” She works as an anthropologist at DC’s Smithsonian Museum, which allows her the chance to study ancient artifacts.

It’s here that she meets up with Barbara Minerva (Kristen Wiig), a shy/timid new hire who’s an expert in gemology. After a failed (thanks to Wonder Wonder) heist at the mall, the FBI has turned over some precious, and unknown, gemstones to the Smithsonian for research. Together, the two work to figure out the origins of the various illegally acquired stones. They aren’t the only ones interested in them, however, as aspiring business mogul Maxwell Lord (Pedro Pascal) has been searching for one in particular…the Dreamstone. Legend has it the stone can grant wishes, which seems ridiculous until both Barbara and Diana find their lives inexplicably changed.

Maxwell’s own plans for the stone draws the rest of the world into turmoil and Diana learns that the magical wishes being granted have a darker side which could destroy everything. In order to save the world, Diana will have to find a way to stop Maxwell but the cost might be more than she can bear…

Again, I’m trying to avoid spoilers so this is about as much story I’ll go into. I don’t want to delve into how Cheetah comes into the action, because it’s a big part of Minerva’s story, and the same goes for Steve Trevor’s (Chris Pine) unlikely return. I was really impressed with how the story handled their characters and made their appearances work logically while forming a deeper emotional connection. I loved it. While the story itself might feel fairly cut and dry on paper, the steps it takes to get there, combined with the character interactions, make it shine in spectacular fashion. Without hesitation, I’m happy to say I enjoyed this film quite a bit more than the original Wonder Woman film.

Don’t get me wrong, I definitely enjoyed the previous solo outing, and it featured some iconic moments. There’s no denying, however, that it’s still a straightforward origin story. Personally, I’ve never been big on origin story films, even ones that are well crafted. Not to mention it’s obvious connections to link between both Batman v. Superman and Justice League felt overpowering.

Wonder Woman 1984, however, is a story about a hero who has settled into their powers/life, not merely trying to find her place in the world. That shift in perspective makes the stakes feel even higher and adds a deeper personal level to everything that takes place. Because of this, it resonated with me on a deeper level than the first film, going beyond a “traditional” comic book flick. In many ways, WW84 goes against the grain of what we’ve come to expect from superhero films these days. Namely, we spend the bulk of the film seeing Diana OUT of costume and spending most of the time as only Diana Prince. There’s still plenty of action to gush over, which deliver on some amazing “holy crap” moments and eye-popping set pieces, but the heart of the story has little to do with the costumed shenanigans.

Instead, we see Diana struggle with personal choices and coming up against others’ self-interest. It makes for a compelling human element that engages us beyond the magic and fantastical aspects. In many ways it’s a character driven story which gives the action moments greater substance and weight. Seriously, the characters are all a ridiculous amount of fun to follow and manage to feel effortlessly genuine. Much of this is due to the strength of the actors they’ve brought on board. It’s clear to see that each of them are having an absolute blast in these roles, and that natural chemistry oozes into the story. These aren’t just one-dimensional characters, but feel full of life.

Kristen Wiig goes from meek to badass with a natural grace that makes me eager to see her take on more action-centric roles. Gal Gadot’s Wonder Woman/Diana Prince is legitimately inspiring, while Chris Pine’s Trevor is both charismatic and hilarious. Pedro Pascal seems to be having the most fun and plays the quintessential “80s guy” persona wonderfully.

The result is a dynamic cast of characters who feel fleshed out without overshadowing one another. The focus is still very much on Diana/Wonder Woman and her journey, but there’s a sense that each of these characters have their own story/agenda beyond what we see play out in the film’s two and a half hours. On top of that, the film’s overall themes are both heartwarming and much needed. Taking place in the 80s age of excess, everything is about getting more, and more. The idea that anyone can “have it all” is ever present, but getting everything you desire can come at a terrible cost. For many (too many) the cost of success is never too high and the ends always justify the means. But in order for the world to survive, people must find a way to work together for similar (non-selfish) ends. Sometimes the only way to truly be your best self is to accept loss and limitations.

From the opening scene–a flashback to Diana as a child on Themyscira–this idea is hammered home and I loved seeing it play throughout the film. It makes for a touching story that ultimately boils down to hope. Hope in the kindness of others. Hope the future can be better no matter how dire things seem; and the hope that we’ll be accepted for who we are.

Considering all that’s happened this past year, it’s a timely message that feels more necessary than ever. More so, it’s handled in a way that manages to stay fun and keeps the spotlight on positivity, even as the threat increases. The end result are some genuinely heartfelt moments that choked me up and left me feeling better for their resolution. I came away feeling as hopeful as the characters themselves. WW84 is a feast for the eyes. The 80s setting makes for a visual cornucopia that assaults your senses in the best way possible. From the bright colors and over the top style, it feels like each frame is packed with details. The action takes a big step up from the previous film, and seeing Wonder Woman’s whip in action never gets old.

While some were concerned with Cheetah’s appearance after the trailer that came earlier this year, there’s really nothing to worry about. The VFX work looks solid, and manages to strike a balance between the big action set pieces and the real world.

It looked phenomenal and I loved the world they built for this story. If we end up getting another sequel, it would be neat to expand on this setting even more, though I am curious to see what adventures await Diana in a time beyond the Justice League.